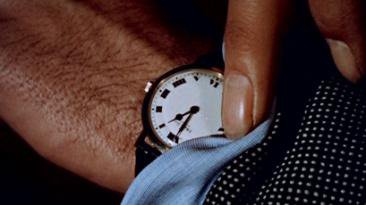 Marclay's celebrated video installation The Clock (2010) is composed of thousands of film clips referencing the time of day, intricately edited into a 24-hour-long montage that matches real time minute for minute - a tour de force of appropriation that is also a functioning timepiece. Marclay has been known since the late 1970s for his highly crafted remixes of time-based media, from vinyl records and tape loops to digital video. He spent three years assembling this staggering work, piecing together fragments from films both famous and obscure. The result, awarded the prestigious Golden Lion at the Venice Biennale in 2011, is a dazzling, genre-defying distillation of movie history, a radical reflection on cinematic duration, and a reminder that time waits for no one.