Free Architectural Advice. Schweder works with architecture and performance art to complicate the distinction between occupying subjects and occupied objects. 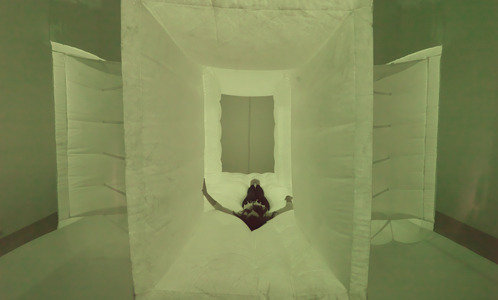 Imagine asking an architect to renovate your home, but you have next to no budget, or you have restrictive regulations about which walls, windows, and doors can be changed in your building, with no likely possibility of expanding the physical limits of your space. For many of us living in dense urban environments, that is an easy speculation that puts off seeking such professional advice. However, what if the architect you approach doesn't see these factors as constraints and if that architect suggests a substantial change in your home merely by acting differently in it? You can be as playful and inventive with this newly renovated behavior as you imagine Frank Gehry is with architectural form. Will the impact on your home through changing the way you behave within it will be as profound as an addition to it? Radical transformations like these are precisely what are possible when architecture is conceived of, in tandem with performance.

In coordination with the gallery's April group show, performance architect Alex Schweder is meeting with people at Jack Hanley Gallery who would like to renovate their home through the addition of a performance to it. If you are interested, please reply to setup an appointment for an hour-long session. You may also book a time slot directly by following the link below:

Alex Schweder works with architecture and performance art to complicate the distinction between occupying subjects and occupied objects. These projects include: Practise Architecture at Tate Britain, Flatland at New York’s Sculpture Center, Its Form Follows Your Performance at Berlin’s Magnus Muller, A Sac of Rooms All Day Long at the San Francisco Museum of Modern Art, Counterweight Roommate in Scope Basel, Roomograph at the deCordova Museum, and The Rise and Fall in the Marrakech Biennial. He is a three-time artist in residence at the Kohler Company and was in residence at the Chinati Foundation and American Academy in Rome. Schweder has been a guest professor at the Southern California Institute of Architecture, Pratt Institute, and the Institute for Art and Architecture in Vienna. The artist is a current PhD candidate in architecture at the University of Cambridge.