Memories for the future. The artworks exhibited encompass family photographs, photographs of historical events, the iconic father of the Nation, and recent photographs referring to the most topical news in Myanmar. 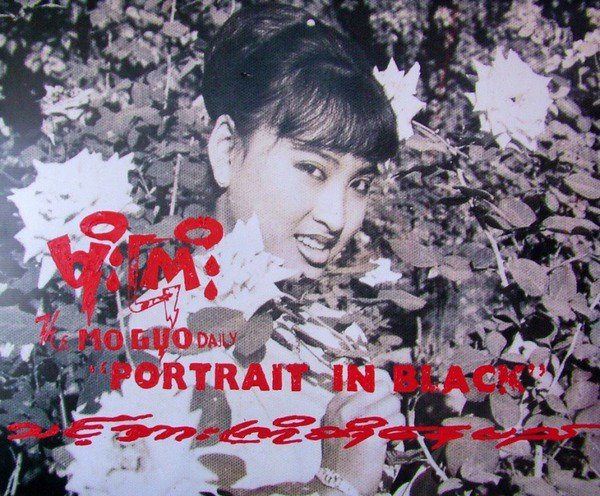 Memories For The Future by Nyein Chan Su (Myanmar) is an exhibition organised and presented by Alliance française de Singapour in collaboration with Intersections. With this new series the artist invites the viewer to a journey through Myanmar’ s history.

Inspired by a family album, the artworks exhibited encompass family photographs, photographs of historical events, like the last speech of Aung San, the iconic father of the Nation, and recent photographs referring to the most topical news in Myanmar.

Crafted like movie posters, the images are obliterated by red titles engaging with the viewer and encouraging to decipher many layers of meaning. The family narrative recedes to leave space to a visual one about people, time and place and eventually to a political discourse.

As stated by the artist, “Portrait in Black” is nothing else than a beautiful black & white portrait of his beloved aunty. However, it is also a memory of one of the most famous actresses of the 1970s and alludes to the black years of the country under the military junta.

Last but not least, “Morning Show Today”, a recent portrait of Aung San Suu Kyi aims to be a testimony of hope for a brighter future. The video work, “Shambles”, filmed in 2012 in the street of Yangon is a cheeky way to finish the journey.

Born in 1973, Nyein Chan Su, mostly known as NCS, had a traditional training in painting at the State School of Fine Arts in Yangon.

Despite the closing of his country to foreign influence until recently, NCS has adapted his artistic practice to the most cutting edge artistic language. Well established both in Myanmar and internationally, NCS was nominated for the prestigious APB Signature Art Prize 2011 organized by the Singapore Art Museum.

NCS’ s artworks are in the permanent collections of the Singapore art Museum, Fukuoka Art Museum as well as in private collections in Europe and in Asia.