Yang Fudong' s films and photographic work, often rooted in traditional Chinese painting, examine tensions between urban and rural, history and the present, worldliness and intellectualism. "Estranged Paradise. Works 1993-2013" presents his film, installation as well as photography. For his presentation "A Portrait, a Story, and an Ending", Alejandro Cesarco has assembled three independent works that take up various literary modes and are further spatially linked by the suggestion of a common narrative. 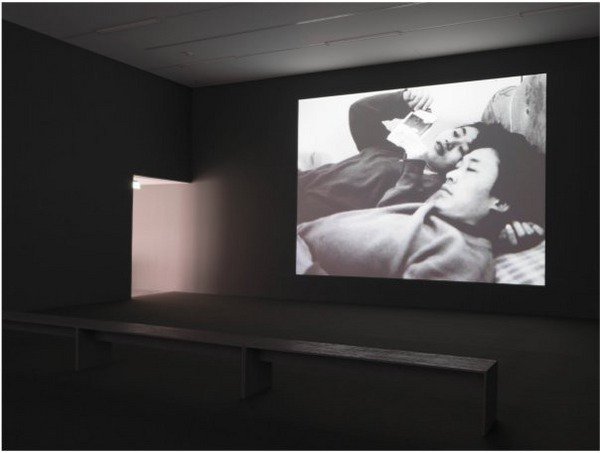 Yang Fudong (born in 1971 in Beijing, lives and works in Shanghai) is one of the most important figures of China's contemporary art scene and independent cinema movement. He came to the attention of the Western art world in 2002, when he premiered his film An Estranged Paradise (1997–2002) at Documenta XI. His films and photographic work, often rooted in traditional Chinese painting, examine tensions between urban and rural, history and the present, worldliness and intellectualism. Their atemporal and dreamlike quality, long and suspended sequences, dividing narratives, as well as multiple relationships and story lines reflect the conundrums of idealism and ideology of a new generation. At the same time, the works address the ideals and anxieties of young people who are struggling to find their place in the fast-paced changes of present-day China.

Estranged Paradise. Works 1993–2013, curated by Beatrix Ruf and Philippe Pirotte, is Yang Fudong's first major institutional survey exhibition in Europe, presenting film, installation as well as photography from the late 1990s until today, highlighting the formal aspects of the construction of cinema in the artist's oeuvre and its resonance in Film Noir aesthetics. Following the exhibition in Zurich, the show will travel to the UC Berkeley Art Museum and Pacific Film Archive (21 August–1 December).

The publication Yang Fudong. Estranged Paradise. Works 1993–2013 will be published in collaboration with UC Berkeley Art Museum and Pacific Film Archive at JRP|Ringier Kunstverlag. It contains numerous images and texts by Philippe Pirotte, Colin Chinnery, Ho Rui An and Rey Chow. With kind support by Sifang Art Museums in Nanjing.

A film program accompanying the exhibition is being planned, featuring Chinese films from the 1920s and 1930s and from his own generation as well as Western films influencing his work.

Alejandro Cesarco
A Portrait, a Story, and an Ending

With the project A Portrait, a Story, and an Ending by Alejandro Cesarco (born in Montevideo in 1975, lives and works in New York), the designated public library space in Kunsthalle Zürich doubles as an exhibition space. For his presentation, Cesarco has assembled three independent works that take up various literary modes and are further spatially linked by the suggestion of a common narrative. The exhibition marks the beginning of a series of artistic interventions in the future public library of Kunsthalle Zürich, which will explore the use of this space and extend its allocated meaning.

Alejandro Cesarco’s works are characterised by conceptual strategies. In his text-based works, photographs, videos, artist books and installations, Cesarco combines language with images, constructs narratives and creates thematic references to popular culture, art history and literature. He raises and explores questions about the relationship between reading and looking, the interweaving of memory and history, fact and fiction, authorship and subjectivity, the ways different narrative structures generate meaning and the ways in which meaning is felt.

The video work Shortly After Breakfast She Received The News (2013) presents a micro-narrative that focuses on the moment shortly after the arrival of some undisclosed news – a moment in which something ends and something else begins. The nature of the news and the associated consequences remain open as is the reaction of the suggested female character: what the camera shows is what is left behind.

Cesarco has an ongoing project in which he creates indexes for books he has not yet written and probably never will. The six-part work Index (An Orphan) (2012) is the fourth in the series and refers to the experience of mourning, the loss of childhood, and becoming an orphan as an adult. In it, the artist assembles a wide range of references and topics, for example: “delusions, 19, 55, 63”, “Sadness, 40, 80”, “Paco Rabanne (perfume), 76” and “sail boats, 13, 70, 88”, children’s films like “Wizard of Oz, The (Fleming), 32” and “Rescuers, The (Disney), 10”, which are accompanied by the names of philosophers, artists, actors, directors and psychiatrists.

Alejandro Cesarco was awarded the Baloise Art Prize in 2011 for his presentation at the Art Statements sector of Art Basel and he represented Uruguay at the 54th Biennale di Venezia.

Further information and images are available on request by telephone +41 44 272 15 15 or email
presse@kunsthallezurich.ch.