wed-sun 11-6, mon and tues by appointment

Bestiary. John Newsom's works are elegiac verses where a moment of life is luxuriously captured and lurking on the periphery of our consciousness is the thought that life is fleeting. 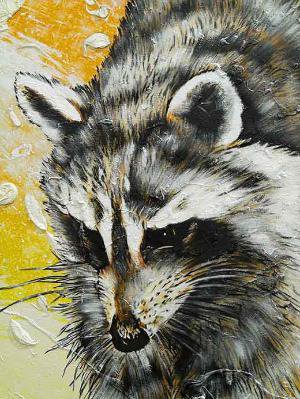 John Newsom’s “Bestiary” is his first one-person exhibition in NY in seven years and in this interval he has honed his remarkable skills as one of our consummate painters of his generation. At first blush these dense oil paintings with owls, raccoons, deer, hummingbirds, wheat fields – seem remarkably American and indeed Newsom, long in New York, comes from the heartland of middle America.

But these are no more about a cockatoo bird than is a Phillip Guston painting about a potato or a Susan Rothenberg about a horse. Newsom like them takes the long view as to how imagery is made by hand with paint. He has reverence for the history of modern painting and Velázquez and Goya are as important to him as de Kooning and Twombly.

John Newsom’s works are elegiac verses where a moment of life is luxuriously captured and lurking on the periphery of our consciousness is the thought that life is fleeting; it is not just seasonal, it is precarious. The wolf against a blood red background is so gorgeous and fully alive with thick impastoed passages that we are almost unable to feel it as threatening. That is because Newsom is not judgmental – life is a gift and man’s relationship to other living things is not the point.

These are paintings each about 2 ½ years in the making and are comprised of layers of mental and physical effort. Early on, before there is imagery, Newsom’s works are entirely abstract, paintings at that juncture that perhaps could easily stand against the best. That is emblematic of what he is after, that a painting has to record its own making and history and tackle the great history of its forebears.

They are sumptuous art works of a master draftsman with finely rendered raccoon whiskers along with uninhibited freedom. Every painting by John Newsom is a full commitment.

John Newsom was born in 1970 in Hutchinson, Kansas. Recent one-person exhibitions include The Richard Massey Foundation (NYC) 2011-2012, Patrick Painter Inc., (L.A.) 2011, and Lattuada Gallery (Milan) 2009. Recent group exhibits include Marianne Boesky 2012, EXIT ART 2011, Gasser & Grunert 2011, and The Hudson Valley Center for Contemporary Art 2010. His works are in the collections of numerous public institutions such as the Whitney Museum, the Neuberger Museum, and the San Francisco Museum of Modern Art among others. He received a BFA from the Rhode Island School of Design and a MFA from New York University in 1994. He is represented by MARC STRAUS (NYC) and Patrick Painter, Inc. (L.A.).