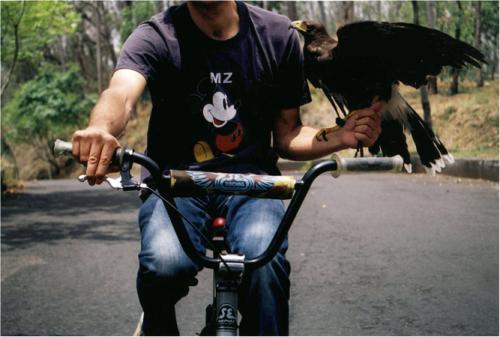 Calderon likens his most current exhibition to Kurt Vonnegut's Slaughterhouse Five in which moments of the past and present are interlaced without division. His work not only embodies a non-linear timeline but also an askew relationship to nature, life and death, art historical references and religious imagery. Perhaps surrealism is not only an imbedded Mexican aesthetic, but truly reflective of the chaos and ambiguity of Mexican life. Calderon's work pivots on the incorporation and interpretation of his personal experiences and of his strangely unpredictable life in Mexico City. There is something profound in exposing these inconsistencies, there by questioning power structures and perceived norms.

This exhibition includes two bodies of sculptural works, photographic works, paintings and a comic book Calderon wrote in collaboration with Nick Waplington. Calderon continues to be interested in the varying effects of working with a variety of mediums. Not only does each provide an alternate perspective but each medium also has it's own history. Mexican culture is rich with ''artisans'' â€“ painters, sculptors, illustrators etc. If Calderon is not actually employing the physical hand of these artisans, which he does through this exhibition, he is always referring to technique and style. The content of Calderon's work intertwines with the medium of the work.

''Resistol 5000'' is a series of three large-scale sculptures of glue cans crafted after Miguel's descriptions by local sculptors creating a fabulous hybrid of the story of debauched teenage city life and rustic hand. Each can is suspended upside down by three various dripping forms referential to nature. While the works appear to replicas of real objects, they also references the fantastical states induced by sniffing glue, a common form of party entertainment, even among the most privileged of Mexico City kids. ''They are as if another form of nature is coming to life. Like seeing a natural disaster, that even though it's tragic, it is aesthetically pleasing to the eye'', muses Calderon.

''Halcon'', one series of photographs included in this exhibition, incorporates what Calderon refers to as the three things that most affected his teenage years and liberated him from the stressful life of adolescence: a BMX bike, a falcon he raised and trained, and his best friend. The material objects become ritualistic for Calderon. In this series (for which he re-acquainted himself with his childhood friend and who also stands in for Calderon) the triad reappears to create a myriad of scenarios.

Calderon collaborated with various families he approached while they were picnicking to create a body of photographs called ''Chapultepec Mexico''. These photographs show various families, each who seem to have suffered a disaster and who subsequently all lie dead in the park. ''Chapultepec Mexico'' sometimes seems to me so full of life but sometimes it seems like everyone and everything could die at any second.''

The centerpiece of the exhibition is ''Bar Rustico Montanoso'', a 3-ton concrete sculpture that appears to be a rustic folk bar carved from wooden logs. Its style is reminiscent of the aesthetic of a place named La Marquesa where Mexican families take their children to escape the city. They typically eat a lot, rent loud motorbikes and ride horses. After fabricating the piece, Calderon actually took it to La Marquesa and used it as real entertainment center for one night. ''I created this personal haven right outside of the city. I guess it was my attempt to get back to nature accompanied by some drinks... ''.

The gallery has primarily been built on the ideals of what it means to represent a specific group of artists over a very long period of time. However, we have also come to realize that infusing the gallery with one-time projects enhances the vocabulary, meaning, and impact of the gallery's agenda. Hence, in 1999 we initiated Gallery 2 as an inspiring and liberating arena to show a large range of selected one-time exhibitions. This program allows us the freedom to show, for instance, a single piece by an artist or a single body of work by an artist we would not otherwise have the opportunity to show, an exhibition of historical works, never been seen artists... Not only does this program broaden the audience's basis of visual reference but it also affords us the opportunity to work with artists that are represented by other galleries, artists that would not seemingly fit neatly into the primary focus of the gallery as well as very young artists that we might otherwise not have the opportunity to show within our primary space.