Dorothy Iannone's portrayals of male and female sexuality celebrate the joy of her most intimate relationships while subverting traditional gender stereotypes of dominance and control. Serena Korda has produced an ambitious, theatrical rendering of animal symbolism and folklore in Aping the Beast. 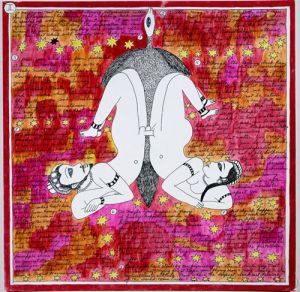 Dorothy Iannone's vibrant and revealing body of work expresses her feelings and experiences through painting, drawing, poetry and song.

A self-taught artist, Iannone started painting in 1959 and in 1961 took the US government to court after customs officials confiscated her copy of Henry Miller’s well-known novel ‘Tropic of Cancer’ at the airport. Her actions led to the government lifting the ban on all his novels in the US. After a transformative meeting with Swiss artist Dieter Roth on a trip to Iceland in 1967, described by Iannone in An Icelandic Saga, an emotionally charged series of words and pictures, she left America and travelled to Europe where she has lived and worked ever since.

Iannone has devoted her life to unconditional love. For more than half a century, her work has illuminated a journey of ever-increasing sexual, political and spiritual awareness and a life perpetually in search of union - with the beloved, the viewer, listeners and the world.

British artist Serena Korda has produced an ambitious, theatrical rendering of animal symbolism and folklore in Aping the Beast. The central spectacle is a towering monster puppet handmade in latex, reminiscent of early B-movies such as Godzilla or The Beast from 20,000 Fathoms. Within all her work Korda is interested in the way secular beliefs and superstitions are channelled through images in popular culture.

Two new films star symbolic mystical creatures - a feline psychic who reveals his remote healing powers and a bristling tarantula which parades alongside dancers and musicians taking part in a cult-like ritual in a nondescript village hall. These works and a series of performances involving the monster expand upon ideas of the spirit and fears of the unknown which are confronted through imitation, spectacle, ritual and humour.