A selection of major works by 19 contemporary artists. The works, made between 1960 and the present, includes performative photographs, collage and appropriation to political and personal images made in the documentary tradition, that underscore the vitality of photographic experimentation today. Working in photography, film, video, installation, and performance, Beirut-based artist Akram Zaatari has built a complex, compelling body of work that explores the state of image-making today; "Projects 100" features two video installations. 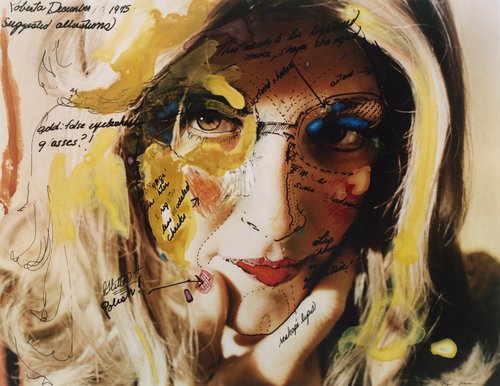 The exhibition featuring a selection of major works—often multipart and serial images—by 19 contemporary artists, from May 10, 2013, to January 6, 2014. The exhibition features works, made between 1960 and the present, which have been acquired by the Department of Photography within the past five years and are on view at MoMA for the first time.
The exhibition is organized by Roxana Marcoci, Curator; Sarah Meister, Curator; and Eva Respini, Associate Curator; with Katerina Stathopoulou, Curatorial Assistant, Department of Photography, The Museum of Modern Art.

XL: 19 New Acquisitions in Photography opens with a selection of compelling pictures by Robert Frank, dating from the late 1960s through the 1990s, in which the Swiss-born American artist combines Polaroids, 35mm negatives, collage, photomontage, stenciling, handwriting, scratching, and splicing. As a whole, this experimental body of work reveals a personal history in pictures that are as challenging, raw, and unpredictable as life itself. Conceptual works by Czech artist Běla Kolářová and Hungarian artist Dóra Maurer are also highlighted, including Kolářová’s Radiogram of Circle (1962–63), unique examples of the artist’s cameraless investigations, conceived by placing objects on photosensitive paper on a spinning gramophone and then exposing them to light. Maurer’s Reversible and Changeable Phases of Movement, Study No. 4 (1972) and Tracing Space I, Tracing Space II, and Plan (1979) are key photographic studies of serial and symbolic representations of movement.

The second gallery highlights works by American photographer Stephen Shore, ranging from his iconic 1970s series American Surfaces and Uncommon Places—which feature ordinary scenes made while travelling across the United States, such as disheveled motel bedrooms, roadside billboards, and half-eaten meals at diners—to pictures shot in 2012 in the Ukraine that capture the poetry of the everyday with sly wit. Paired with Shore is the work of British photographer Paul Graham, whose color images continue to expand and enrich the medium’s documentary traditions. Graham’s early and ambitious suite of color works, known as A1: The Great North Road, consists of a series of portraits, landscapes, and vignettes made from 1981 to 1982 taken along England’s metaphoric spine.

The third gallery introduces influential artists of the 1970s feminist avant-garde, including Austrians Birgit Jürgenssen and VALIE EXPORT—who redefined perceptions of femininity through an innovative, performance-based photographic practice—whose work calls conventional gender roles into question. In the signature self-portrait I Want Out Of Here! (1976), Jürgenssen suggests that the condition of womanhood in a patriarchal system relies on repressive codes of domesticity. In Identity Transfer 1, 2, and 3 and Pop (Identity Transfer) (1968), VALIE EXPORT conveys ambiguous representations of gender by emulating a pimp, sporting tight black trousers, a curly short-haired wig, heavy gold chains, and an androgynous jacket. Jürgen Klauke’s Physiognomies (1974–75) also takes on androgyny through a sequence of close-up shots featuring nuanced changes in facial expression and pose. A significant section of this gallery is reserved for American artist and filmmaker Lynn Hershman Leeson who between 1974 and 1978 transformed herself into her fictional alter ego, Roberta Breitmore. A cache of documentation—photographs, drawings, films, and legal and medical papers—maps out Breitmore's multifaceted ―life.

The fourth gallery features photographic works, by artists such as Allan Sekula, Yto Barrada, Oscar Muñoz, Liz Deschenes, and Mariah Robertson, some that experiment with material culture, and others that document the working-class response to globalization and explore the idea of labor history. ―Chapter 1,‖ part of Sekula’s magnum opus Fish Story (1988– 95), is an intertextual work that addresses the material geographies of the advanced capitalist world by bringing together images of unemployment and ecological discontent from the world’s port cities. In Autocar–Tangier (2004), French-born Moroccan artist Yto Barrada focuses her postcolonial lens on the colorful geometric shapes of corporate logos imprinted on buses shuttling between Morocco and Europe, revealing how the illiterate in Tangier distinguish between destinations, and thus forge their routes of escape. In The Game of Probabilities (2007), Columbian artist Oscar Muñoz weaves together six identity pictures in both black and white and color—taken over several years—to construct 12 hybrid portraits that underscore the mutability of identity. In cameraless experiments, both Liz Deschenes and Mariah Robertson straddle photography and three-dimensionality. Robertson’s 11 (2012) is made on a single roll of paper, 100 feet long and 30 inches wide, which covers the ceiling and walls with images of enlarged negatives from Oakland, Hawaii, Morocco, New York, and Sacramento, along with large areas of abstract color and chemical drips.

The fifth gallery, which opens to the public on August 23, features works that use the photographic medium not as a way of describing a simple experience, but rather as a conceptual tool for appropriating and recontextualizing existing images. For his slide show free fotolab (2009), British artist Phil Collins invited inhabitants from various European cities to submit undeveloped rolls of 35mm film, which he then processed and developed free of charge. The selected slides evoke childhood memories of vacations and parties, as well as the demise of obsolete technology. Two pictures from Canadian artist and filmmaker Stan Douglas’s Disco Angola (2012)—A Luta Continua, 1974 and Two Friends, 1975—use actors and reconstructed sets to chronicle the civilian war in Angola in tandem with the burgeoning disco underground in New York during the early 1970s. Ethical and social justice issues play a significant role in American artist Taryn Simon’s The Innocents (2002), a seminal project focused on Americans wrongly convicted of violent crimes and later exonerated through DNA evidence.

As the dissemination of information has become increasingly image-driven, the concepts of knowledge, interpretation, and truth are frequently conflated. In Riffs on Real Time (2002–05), Leslie Hewitt shows how documents of the past—old pictures, magazines, consumer items—are mediated, reframed, and changed through the contingencies of space and exigencies of time in African American communities. In UNBRANDED: Reflections in Black by Corporate America 1968– 2008 (2006–08), Hank Willis Thomas appropriates and ―unbrands‖ ads featuring African American subjects. The unbranded scenarios break down the ubiquitous and highly influential language of advertising, exposing mass-media visual strategies and the cultural stereotypes upon which they are rooted.

The exhibition is organized by Roxana Marcoci, Curator; Sarah Meister, Curator; and Eva Respini, Associate Curator; with Katerina Stathopoulou, Curatorial Assistant, Department of Photography. Major support for the exhibition is provided by Peter Schub, in honor of Anne and Joel Ehrenkranz.

Working in photography, film, video, installation, and performance, Beirut-based artist Akram Zaatari has built a complex, compelling body of work that explores the state of image-making today. One of the founders of the Arab Image Foundation, which aims to track down and preserve photos from North Africa, the Middle East, and Arabic communities around the world, Zaatari collects, examines, and recontextualizes a wide range of documents—from found audiotapes to family photographs to videos found on YouTube—that testify to the cultural and political conditions of Lebanon’s postwar society. His artistic practice involves the study and investigation of the way these documents straddle, conflate, or confuse notions of history and memory.

Projects 100 features the American premiere of two video installations: Dance to the End of Love (2011) and On Photography, People and Modern Times (2010). Comprised of found YouTube clips made by Arab youth and shared freely online, Dance to the End of Love examines the role of social media as a space that is both intimate and public. On Photography, People and Modern Times, which tracks photographic records that Zaatari researched and collected for the Arab Image Foundation in the late 1990s, is a meditation on intimate past moments evoked by photographs and a present environment that secures their preservation. Cutting across temporal and geographic borders, these two video installations probe the nature of time and assert the permeability of memory.

The third-floor Edward Steichen Photography Galleries 1–4 open on May 10, and gallery 5 on August 23, and all remain on view through January 6, 2014.