The work of over 30 Spanish and International artists with the objective of reviewing the relationship between art and public. The title, saying that describes an event that occurs unexpectedly and, fortuitously. This is the thrust of the show: the possibility of the works on display won't be forced into the lines of a particular discursive plot. 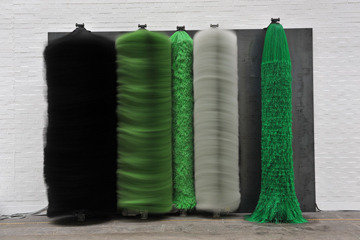 Sin motivo aparente (For no apparent reason) is a collective exhibition showcasing the work of over thirty Spanish and International artists with the single objective of reviewing the relationship between art and public within a context, the CA2M venue, Center where the viewer has been CA2M main objective since its opening five years ago. By making use of two clear references, Lawrence Weiner and Robert Filliou, who, from their own positions introduced essential tools to understand new ways of reception of art production.

“Sin motivo aparente” is the Spanish translation of “For no apparent reason”, saying that describes an event that occurs unexpectedly and, fortuitously. This is the thrust of the show: the possibility of the works on display won't be forced into the lines of a particular discursive plot, warding the curatorial tyranny and the narrative imposition off.

Sin motivo aparente (For no apparent reason) is fiction applied to art to slowly shed the discourse until it remains up in the vacuum, in the emptiness, operating independently in the viewers´ mind. Bringing out Lawrence Weiner´s main contributions to the art of our time: the possibility that art “may not necessarily be built”, which may only work as an idea and the receptor is the one who starts its meaning. The American artist also stated that public art was not only the art that takes place out from the institutions but the art that “belongs to the public”.

This idea overflies a project, which is indeed, aimed at exploring ourselves as art receptor. The works on display never lose their original meaning, but, all together function illustrating themselves, not only ideas but putting emphasis on the exhibition concept itself, pondering about how do we move in the space, the way we stand in art.

For no apparent reason thrives on the legacy from Robert Filliou, French artist who died in 1987, a fascinating work based on art freedom from its high and elitist aura. Filliou stated that it takes no genius to produce art, because the needed single tools for that end are innocence and imagination, common attributes from all of us. That advocated art by Filliou is the art of seduction and spontaneity, the art of game and poetry.

As starting point, the exhibition has a starting and searching introduction point, a fictitious site in theory and discourse which are not yet fully strengthened. Later, sheltered always by fiction, art will be progressively released from the discourse ballast, artist will clash with their own work, which it will end on a stage where everything is regulated by rather emotional parameters. For no apparent reason is an exhibition which can be one or thousand at once, depending on the shape that adopts in the mind of each visitor.

A bilingual Spanish-English exhibition catalogue will be published.

CA2M Centro de Arte Dos de Mayo
Av. Constitución, 23 - 28931 Móstoles, Madrid, Spain
Opening times:
From Tuesday until Sunday 11:00 a 21:00 h.
Free admission to the center and to all his activities