Wade Guyton, Guyton\Walker, Kelley Walker: in contrast to their earlier practice in this show they will dispense with a segregation of the three artistic personae, which is otherwise strictly observed. In the group exhibition "On the Move. European Kunsthalle at the KUB Arena" it is the aspects of performativity, of the appearance and disappearance of temporary artistic and institutional spaces, that are being focused on and raised for discussion. 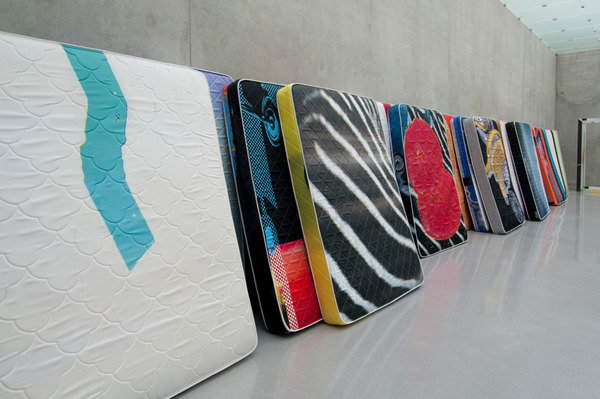 The timing of the simultaneous Wade Guyton, Guyton\Walker, Kelley Walker presentation could not be better. All three have been acclaimed in major solo exhibitions at eminent institutions in recent years and the intellectual and critical reception of their works is unanimous in its praise of the three distinct positions.

This exhibition is their first joint appearance and is thus all the more excitedly awaited. In contrast to their earlier practice—and many see this alone as a minor sensation— in this show they will dispense with a segregation of the three artistic personae, which is otherwise strictly observed.

But why talk of three »persons« here at all? Wade Guyton and Kelley Walker have often exhibited together, yet until now they have seen to it that the duo’s activities were ring-fenced from their individual careers. Wade Guyton and Kelley Walker, for instance, both exhibited in the That’s the way we do it group exhibition at the Kunsthaus Bregenz in 2011, but it would never have entered their heads to exhibit as a duo in the same show. The artists have always thought of Guyton\Walker as a separate artist, not as a side project, and as such has different gallery representation from either Guyton or Walker.

Surprising at first perhaps, a convincing logic nevertheless underlies this separation. For it simultaneously displays, underpins, and calls into question the concept of authorship, the role of which is not to be underestimated in the work of Wade Guyton and Kelley Walker. This is closely connected with topics such as authenticity and the duplication of the autonomous artwork in the form of editions or other types of multiple production and distribution. What makes an artistic signature recognizable? How does a signature style come about? And how can the cult of genius often connected with such a style be avoided without automatically introducing the idea of the death of the author?

On the face of it, in relation to the works of Wade Guyton and Kelley Walker, these questions are vexing, for the socalled artist’s individual hand is often modified in their works through the use of the computer. By means of unconventional production techniques, however, the two artists develop highly individual pictorial languages that combine allusions to commerce and advertising culture with liberal quotations from Modernist art—particularly pop art in this case—and which alternate between analog and digital media.

Both Wade Guyton and Kelley Walker make use of found signs and images, which they transfer to canvas or wood panels as ink-jet or screen prints or transform into sculptures and installations. Here too, in Guyton\Walker, we find motifs from high and low culture. Like Wade Guyton and Kelley Walker, Guyton\Walker work with different spatial levels and divergent references. But from this the duo often develops paintings, objects, and installations that play with an impression of provisionality, chaos, the unfinished. Images and forms migrate and mutate. A painting may become a can, a sheet of printed drywall or a table. And the table may become a mattress or even a painting again.

Three parallel solo exhibitions have been developed for the Kunsthaus Bregenz, presenting to a broad public a selection of Wade Guyton’s well-known X and stripe pictures, as well as Kelley Walker’s now legendary brick paintings and Rorschach works. All three artists will also be developing new works for the presentation.

The presentation will avoid strict segregation of the three producers in favor of an interplay designed to bring out their similarities and differences. This may of course also involve concentrating on certain groups of works or on one particular artist on a particular floor. The dynamic relation between concept and visuality is the common thread running through the entire exhibition. Above all, though, this deliberately fiery show values dialogue—not just between the three artists, but also with the public, whom it seduces in a way that is both intellectually and aesthetically entertaining.

On the Move.
European Kunsthalle at the KUB Arena

Project-based, performative, on the move—is a possible description of the European Kunsthalle’s program. Founded in Cologne in 2005 as a discursive platform without any fixed premises, it has developed its own forms of institutional action. As a contemporary art institution that combines a wide range of artistic procedures and interventions in current art and cultural debates, it exists wherever its projects take place. The European Kunsthalle itself has the attributes of an event, appearing only to disappear and then reappear somewhere else.

In the exhibition On the Move. European Kunsthalle at the KUB Arena it is precisely these aspects of performativity, of the appearance and disappearance of temporary artistic and institutional spaces, that are being focused on and raised for discussion. Drawing on elements of past European Kunsthalle activities, on staging strategies and general questions around cultural, social, and institutional spaces, the participating artists developed a wealth of ways of looking at the principle of »eventfulness« and its implications.

After examining archive materials, the Macedonian artist Yane Calovski suggests a subjective reading of European Kunsthalle history in the drawings he has developed for the exhibition, while David Maljkovic focuses on engaging abstractly with exhibitory presentational forms and their reduction to their equipment. Stephen Willats, whose multimedia work In And Out the Underworld for the Ebertplatz square in Cologne brilliantly captured the social aspect of this site in 2009 transfers his ideas to the exhibition space in a version of the work specially conceived for the KUB Arena. The starting point of Johannes Wohnseifer’s work is his invitation to Mark Gonzales in 1998 to use specially created sculptures as ramps for a performance in the exhibition rooms of the Städtisches Museum Abteiberg Mönchengladbach, with a view to probing the boundaries between public and museum space. Additionally, both Nick Mauss and Charlotte Moth have developed new works for the Bregenz exhibition.
The exhibition architecture of fiber cement panels was designed by the artist Dorit Margreiter together with the architect duo Luciano Parodi and Lina Streeruwitz. The idea goes back to a design by Dorit Margreiter for a pavilion, never actually built, for the European Kunsthalle c/o Ebertplatz project in 2009. The panels from which the pavilion was to have been constructed are laid out like a carpet at Kunsthaus Bregenz. Parts of the carpet have been set upright. Together the horizontal and the upright panels create an open spatial sequence for the works on exhibition.

Following the cooperation with the Van Abbemuseum in Eindhoven in 2011, the KUB Arena’s present invitation is the second to an institution whose modes of work and program display many parallels with those of the KUB Arena itself.