Documentary Visions. Working largely outside the state media apparatus, pioneer filmmakers like Wu Wenguang, Zhang Yuan, and Duan Jinchuan provided bracing alternative visions of both society and filmmaking. An exhibition that features nearly 30 films made between 1988 and 2013. 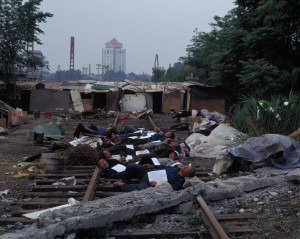 The Roy and Niuta Titus Theaters

Amid China’s epochal transformations over the last two decades, new documentary aesthetics emerged, as the overwhelming cultural and societal challenges caused by China’s transition to a free-market economy compelled professional and amateur filmmakers alike to capture new realities on screen. Working largely outside the state media apparatus, pioneer filmmakers like Wu Wenguang, Zhang Yuan, and Duan Jinchuan provided bracing alternative visions of both society and filmmaking, with an ethos based on direct observation of reality and uncensored personal expression. This newfound fascination with unbridled realism also informed the work of filmmakers as disparate as Zhang Yimou and Jia Zhangke and artists like Ai Weiwei and Ou Ning. The proliferation of the “reality aesthetic” has led to more complex notions of what reality means and how it is represented.

This series aims to reflect the evolution of documentary practice in China over the past 25 years, revealing the growth and ever-increasing influence of nonfiction film and media. The selections, encompassing a wide expanse of Chinese film and media, including state-approved productions, underground amateur videos, and Web-based Conceptual art, provide a vivid look into a society in perpetual transformation. Some screenings will be presented by the filmmakers and scholars. Organized by Sally Berger, Assistant Curator, Department of Film, The Museum of Modern Art, and Kevin B. Lee, independent curator and Vice President, Programming and Education, dGenerate Films.