Henry, Thomas, Keith and Jack. Wylie's constant fascination with visual culture and "the act of looking" is manifest in the paintings and comparative drawings in this exhibition. 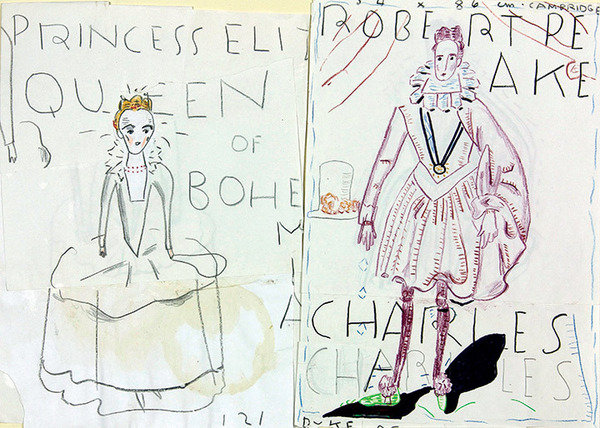 Union Gallery is pleased to present Henry, Thomas, Keith & Jack, an exhibition of new works by Rose Wylie. Union will be showing recent large-scale paintings and drawings by the artist from 2012 and 2013. The exhibition will run concurrently with Focus: Rose Wylie - a solo exhibition at Tate Britain opening in May and Work on Paper, Michael Janssen Gallery, Berlin.

Rose Wylie’s constant fascination with visual culture and ‘the act of looking’ is manifest in the paintings and comparative drawings in this exhibition. Her works are populated by accessible, shared figures and text from film, art history and the everyday; magnified and brought to the fore in a montage of remembered images and references. In this process, Wylie pares her perceptions of the world down to their essence, projecting them back onto her canvases in painterly revision.

The four large-scale paintings in this exhibition form part of Wylie’s ongoing Film Notes series and a body of work surrounding the notion of homage or ‘respect to’. The four men of the exhibition’s title are loosely linked by happenstance and the excitement of chance, something that informs much of the artist’s practice.

Wylie has sited English painter Robert Peake the Elder (c. 1551–1619) as an inspiration for recent drawings and a painting. Appointed as royal picture maker, Peake made several portraits of the monarchy during the 17th century. In Wylie’s P.O.W (Henry) 2013, she makes poetic reference to Peake’s painting of Henry Frederick Stuart, Prince of Wales c1608. In her painting the prince appears, baby-faced and posturing in oversized hat and breeches. Wylie emphasizes that is not the royal content of Peake’s work that interests her, but rather something in the way that he paints, in his ‘magic’ as an artist.

The Hunt (Thomas) 2013 pays homage to the Danish director Thomas Vinterberg and his 2012 film The Hunt. In the foreground is a figure from the opening scene of the film, taken from a still found in The Sunday Observer. Reduced to an outline, the image of a bather is placed against fragmented sections of Lars von Trier and Thomas Vinterberg’s Dogme 95 Manifesto. Wylie frequently uses text in her paintings, not necessarily for logic or intelligibility, but for the ‘look’ of a painting or as a means of unifying a composition. Letters are sometimes randomly added (with a fondness for the letter K) and words oftenmisspelled or allowed to trail off at the edges, in the absorption of painting them.

A canvas strip of text attached to bottom of The Hunt (Thomas) acts as a continuation or link to P.O.W (Henry). It bears no relevance the content of the painting, but is a studio-found object, a ‘change of mind’ stripped from the Henry painting. The artist has chosen to hang these two paintings side by side, their close proximity intentionally highlighting the unexpected, and blatant difference in surface and content. This interplay can also be found in her pencil and coloured pencildrawings. Wylie makes frequent use of collage - cutting, pasting and sometimes discarding drawings entirely in a process of editing and experiment. She will often make paintings from a drawing rather than directly from the source of an image. The third painting, simply titled Keith 2013, was produced from studies made of the artist’s plumber Keith, mending her boiler wearing a head torch.

Jack Goes Swimming (Jack) 2013 makes reference to Phillip Seymour Hoffman’s romantic comedy Jack Goes Boating. Part of the Film Notes series, it is painted from memory and recalls a scene in which the central character visualizes himself in a swimming pool. Wylie links the encounter with a swimmer to that of the figure in The Hunt - two swimmers from two otherwise unconnected films. This element of chance and conjunction of disparate images is an important feature of Wylie’s work. In this exhibition, the plumbers, princes and swimmers of her paintings exist in unison and are painted with equal significance.

Rose Wylie was born in Kent in 1934. She studied at Folkstone and Dover School of Art in the mid 1950's, returning to study at the Royal College of Art, London in 1981. Since then she has continued to exhibit prolifically in the UK and internationally. Recentexhibitions include National Museum of Women in the Arts, Washington D.C, Thomas Erben New York 2010; Jerwood Gallery, Hastings 2012 and Regina Gallery, Moscow, Haugar Museum, Tonsberg, Norway; Rosenwald Wolf Gallery, Philadelphia. 2013. Rose Wylie’s work is included in many public art collections including Tate Britain; The Jerwood Foundation; Museum of Women in the Arts, Washington DC; Arts Council England; York City Art Gallery; Arario (Seoul, Korea); Deal (Dallas, USA).