In "Once upon a Bicycle, not so long ago", Ryan Gander reminisces, exhibiting his great skill as a visual storyteller; he presents an entirely new body of work. In the Bakery Jacqueline Bebb shows three works, which are semi-autobiographical and intentionally awkward - to quote the artist. 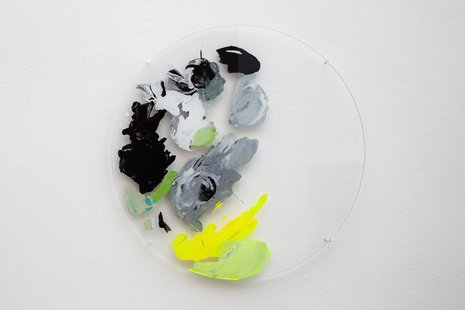 Ryan Gander
Once upon a Bicycle, not so long ago

Annet Gelink Gallery proudly presents the fifth solo exhibition by Ryan Gander (Chester, 1976): "Once upon a Bicycle, not so long ago", showing an entirely new body of work. Gander's practice is as deeply conceptual as it is playful, recalling fictional stories and events, personal memories and art history - in particular the history of Modernism. In his current show at Annet Gelink Gallery, Gander reminisces, exhibiting his great skill as a visual storyteller.

On entering the gallery, the first work one encounters is "My head on your Belly" (2013), a marble cast of the items of luggage Gander always travels with. Together with the title, the work seems to constitute a longing for home. A little further in the exhibition, one finds I"nvestigation # 99 - the halo effect" (2013), consisting of two sculptures which Gander has made from a description of an unfinished project by his father. Central in the exhibition space "I is ... (iii)" (2013) is shown, a marble sculpture representing a den, which consists of a simple shelter made by the artist's three years old daughter using a full size Rietveld Crate chair and smaller Rietveld Crate chair, designed for children. Although this work directly recalls Gander's family-life, it also hints to art history (De Stijl) by the use of the Rietveld Chairs and by the technique of 'draping'. By draping the marble - recalling traditional marble sculptures - Gander playfully exhibits a tension between tradition and modernity. Gander's works are often extremely layered, threading together fact and fiction, the personal and the historical.

Whereas "My head on your Belly" and "I is ... (iii)", Gander chooses to work with traditional artistic materials like bronze and marble, in "Investigation # 92 - With heart dotted 'i's" (2013) the artist transfers to striped toothpaste from which to fashion an alphabet. Likewise, the lamps he made for his wife are constructed from unorthodox materials. In Gander's practice, everything can become a work of art, the artist doesn't limit himself in material nor in subject.

By mentioning his wife, three-year-old daughter or father in his work, Gander easily engages his audience. One should keep in mind however, that his practice is as highly conceptual as it is intimate: Gander is acutely aware of the feelings he is able to steer. This also comes to the fore in "Once upon a Bicycle, not so long ago", where the feeling of yearning one encounters in the exhibition is made explicit for those who look and listen carefully. Gander is, after all, a wonderful storyteller.

Recently, Gander has participated in the Venice Biennial (2011), dOCUMENTA 13 in Kassel (2012) and he had a solo exhibition at Palais de Tokyo.

Jacqueline Bebb
She showed a bit of Skirt, but settled for a Kit-Kat

In the Bakery, Annet Gelink Gallery proudly presents its first show by Jacqueline Bebb (Chester, 1977): "She showed a bit of Skirt, but settled for a Kit-Kat".

At Annet Gelink Gallery, Bebb shows three works, each representing specific moments in time. The works are semi-autobiographical and intentionally awkward - to quote the artist. They consider both fondness and regret and come from an ongoing body of work, which explores the theme of dissonance.

In both "Almost, Sweet Talk, Caffeine (My Dissonance)" and "Skulk", Bebb reflects on her childhood and considers her occasional less-than-perfect behaviour in retrospect. In "How Much I Fancied Her 1995 - 2001", the artist looks back at a quarrel she had with her best mate, simply referred to as BM. The argument concerned the level of affection one of them thought the other had towards a girl. At the time, a pie chart was drawn to illustrate the argument, but a few years later the friends didn't remember the specifics of the argument, only their shared endeavour. The wooden pie charts are made after the original drawing. Each segment of the pie represents a year between 1995-2001, with the varying angles denoting the level of affection between one of the friends and the girl. One pie chart has been gifted to pubs in Chester, which the artist and BM used to frequent together. A second pie chart is exhibited as a sculpture in the current exhibition and the third is gifted to BM as a testimony of their friendship. It was given with the dedication: "BM, I did wrong you once and I am sorry."

Bebb participated in the groupshow Chester at CO2 in Rome (2012) and she had a solo show called Carrying Off in Aldeburgh (2013).

Image: Ryan Gander, Please be patient - Rebecca holding Olvie up so that she can stand on the bed, Hampton Inn and Suites, San Marco, Texas, Us, April 2010, 2013