Photogravure, a printmaking process that combines elements of engraving and photography, was a prized medium among artist-photographers of the late nineteenth century, who labored over their hand-pulled prints. Starting from Scratch showcases more than seventy of the Museum's finest etchings, demonstrating the ways in which some of history's most famous artists have embraced the medium to create original and dynamic works of art. 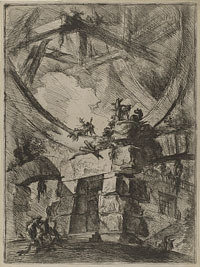 Starting from Scratch: The Art of Etching from Durer to Dine

Starting from Scratch showcases more than seventy of the Museum's finest etchings, demonstrating the ways in which some of history's most famous artists have embraced the medium to create original and dynamic works of art. Since its inception, many artists—especially painters—have been drawn to etching for the variety of aesthetic effects that could be achieved, as well as the medium's ability to capture the essence of an artist's hand in printed form.

Etching's development in German metal workshops is represented through a handful of prints, including works by Daniel Hopfer (German, c. 1470–1536), a craftsman who etched armor decoration and inventively applied the technique to printmaking in the early sixteenth century. Examples by Hopfer's contemporary Albrecht Dürer (German, 1471–1528), the first artist of international acclaim to experiment with the process, are also on view.

Expressive line work underscores the drama of Rembrandt van Rijn's (Dutch, 1606–1669) crucifixion scene, The Three Crosses (1653–55), one of his most ambitious prints. This masterpiece, with its deep shadows and rich velvety lines, conveys the despairing tenor of the biblical narrative. Jacques Callot's (French, 1592–1635) sweeping curves brought the etched line to new levels of virtuosity, as seen in The Siege of Breda (1627), a grand battle map on display at the Museum for the first time. Examples from Giovanni Battista Piranesi's (Italian, 1720–1778) portfolio Imaginary Prisons (c. 1749) demonstrate his combination of several etching techniques to generate areas of smoky gray tone. The rare first edition impressions of the series on view are filled with pentimenti (visible alterations), which underscore Piranesi's creative process and augment the mysteriousness of his prison architecture. Francisco Goya's (Spanish, 1746–1828) Los Disparates (The Disparates) (c. 1813–20) similarly exploits etching to expressive effect. His innovative manipulation of broad areas of continuous tone using aquatint adds texture and flattens space, heightening the sense of disorientation and absurdity in his subjects.

Artists have long experimented with characteristics unique to etching, exploiting the medium's tonal potential to evoke qualities of light and atmosphere, visible in James McNeill Whistler's (American, 1834–1903) Venetian scene, Nocturne (1878), and Camille Pissarro's (French, 1830–1903) Rain Effect (1879). The use of etching to explore thematic variations played a major role in Pablo Picasso's (Spanish, 1881–1973) artistic expression. In his most ambitious series, the Vollard Suite (1930–37), Picasso uses a spontaneous and poetic interplay of line and tone to rephrase themes of attraction, voyeurism, art making, and allegories such as the mythical Minotaur—a figure Picasso introduced as a surrogate for himself. Similarly interested in variations on a theme, John Marin (American, 1870–1953) expressed his fascination with modern architecture in New York City by repeatedly recreating abstract studies of the Woolworth Building (1913–17), which was the world's tallest building at the time it was completed in 1913. Several versions of the famous skyscraper are on view, selected from Museum's master set of nearly 200 prints and 70 plates that comprise the most complete collection of Marin prints anywhere.

Photogravure: Master Prints from the Collection

Photogravure, a printmaking process that combines elements of engraving and photography, was a prized medium among artist-photographers of the late nineteenth century, who labored over their hand-pulled prints. Although not widely practiced today, the process remains a preference for certain contemporary artists. This exhibition includes around fifty-five works, most of them master prints from the 1880s through the 1910s by Pictorialist photographers such as Edward S. Curtis, Peter Henry Emerson, Gertrude Käsebier, Edward Steichen, and Alfred Stieglitz. There are also extraordinary examples from the 1930s by Man Ray, Paul Strand, and Doris Ullman, and contemporary works by Ian van Coller, Jon Goodman, Eikoh Hosoe, and Lorna Simpson.