International Art Festival. This year's theme: Identifying Europe. Important artists and talents give their view on the history, the economic crisis, populism, Fort Europe and the position of art. More than 100 artists show their work. The official opening takes place at all locations, with deejays, live acts, performances and a readings. 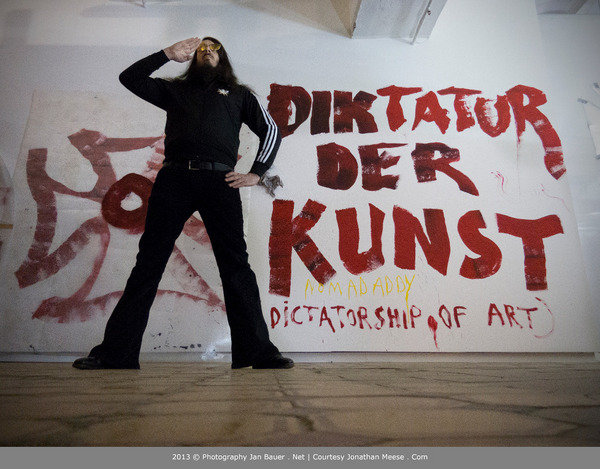 On 23 May the international art manifestation Twente Biënnale opens its doors in cultural district Roombeek in Enschede. This year’s theme: IDENTIFYING EUROPE. International top artists and talents from the East of The Netherlands give their view on the history, current affairs and near future of Europe, the economic crisis, populism, Fort Europe and the changing position of art. Main location of Twente Biënnale 2013 is Rijksmuseum Twenthe, but during the manifestation, until the 10th of June, the public space of Roombeek and other cultural institutions in the district will also stage exhibitions, readings, workshops, performances, actions, incidents, music, theatre, film and much more.

Rijksmuseum Twenthe
Right in front of the entrance of Rijksmuseum Twenthe you find the WWIII sculpture by Atelier van Lieshout, which is part of their Infernopolis project. In the museum itself you can see work of a.o. Czech enfant terrible David Cerny, the latest film by German top artist Jonathan Meese (world premiere) and an installation referring to the documentary by Austrian film maker Paul Poet, ‘Auslander Raus’. The installation is an audiovisual account of the art project of the same name by German artist Christoph Schlingensief, who in 2000, built a Big Brother house out of sea containers for rejected asylum seekers in the city centre of Vienna.

Museumlaan and Stroinksbleek – Church of Detention
In the public space of Roombeek you can find several art works amidst the district’s postmodern architecture. Here too, European social current affairs are never far away: don’t be surprised to stumble across washed up corpses from Northern Africa, caged free states behind fences or to find other references to the theme of the Biënnale. With contributions by a.o. Teun Castelein (best-known for his attempt to patent the word Allah), Miktor & Molf, Eddie the Eagle Museum, Felix & Mumford, ViaOral (winners Kunstvlaaiprijs 2010). Highlight will be the caged House of Europe/ Church of Detention – by collective Refunc from The Hague, as seen at Manifesta and Lowlands.

Architects of Air
Architects of Air (UK) presents 1200 square meters of hallucinating design with their latest giant inflatable Miracoco (2011). The design was derived from Islamic architecture, a playful reference to the theme of Twente Biënnale 2013, Identifying Europe. Last year the work could be seen by the side of Sidney’s Opera and now it is on display in the middle of cultural district Roombeek. An unforgettable art experience for all ages!

Street art and Urban Art
Street art is one of the cornerstones of the Twente Biënnale. This year you can find street art in Roombeek, by a.o. Hugo Kaagman, JR and Booyabase, The Londen Police, ZEUS, Pipsqueak, but also by British drum ‘n bass pioneer GOLDIE, aka Clifford Price.

26 May: Symposium at Rijksmuseum Twenthe
On Sunday 26 May a symposium takes place with several readings and artist talks at the Rijksmuseum Twenthe, with a.o. professor in philosophy Jos de Mul and literary critic of NRC Handelsblad Pieter Steinz.

23 May: Spectacular opening with Darth Vader hot air balloon
On Thursday 23 May the spectacular opening takes place. From the exact location where on 13 May 2000 several sea containers with illegal firework exploded, almost completely destroying the district of Roombeek, a giant Darth Vader hot air balloon by Pearl Ballooning (Be) is launched. The Twente Biënnale in Roombeek marks a new era for this reborn architecture and culture district: Cultuurpark Roombeek. The official opening takes place at all locations, with deejays, live acts, performances and a reading by Maarten van Rossem.