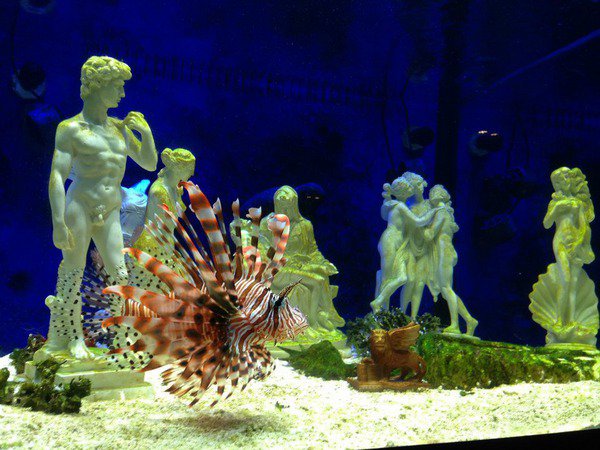 The tiny island of Tuvalu located in South Pacific, the smallest member of Commonwealth of Nations, will take place in the prestigious Biennale Arte 2013 from 1st June-24th November for the first time this year. Taiwanese artist Vincent J.F. Huang will create artworks that allow audiences to consider the global climate change issues we face today. A series of ‘black humor’ installations will be on display, namely a colossal oil pump installation, which will transform into a killing machine that will slaughter natural species; a live coral reef aquarium with the remnants of human civilisation submerged within it and an unusual spectacle of animal ‘refugee’ sculptures that have become endangered by global warming. The Tuvalu Pavilion titled ‘Destiny．Intertwined’ serves as a metaphor for the Developed World and Third World and how ultimately as humans, we all end up with the same fate.

The 6 metre high interactive oil pump installation ‘In the Name of Civilization’ will be situated at the Forte Marghera-a symbolic fortress dating back to the Napoleon period which was built for the protection of the city of Venice. The installation invites audiences to ‘fill up gas’ whilst contemplating the dying iconic New York ‘Wall Street Bull’-hanging from its noose above it, and the sea turtle, hopelessly waiting to be decapitated. Huang uses these ‘animal victims’ to point out that, under capitalism’s unlimited pursuit of economic development, Earth’s natural resources have been plundered, leading to effects that will not only devastate the ecosystem of a Third World Country such as Tuvalu, but will bring inevitable disasters to the capitalist driven economy of the First World too.

The prestigious Venice Arts Academy will be partnering with the Tuvalu Pavilion this year and will house Huang’s artworks and sculptures. Through the collaboration, the Director of the Venice Arts Academy, Carlo Di Raco, hopes to inspire young artists in the academy to reflect on the circumstances within their very own city. The MOSE project in Venice, designed to protect the city from flooding and stop the every-increasing danger and damages from natural disasters shares similarities with Huang’s work and his unique presentation of the Tuvalu perspective.

The ‘Modern Atlantis Project’ uses an aquarium tank to house coral reefs which are growing on the surface of the water. Miniature sculptures of iconic landmarks represent the civilised and capitalist society that are now found submerged within the tank. The corals are free to flourish until the resources in the aquarium are fully consumed, leading to a coral bleaching event. By re-creating a modern day Atlantis city, Huang shows- all that is known to civilized mankind will one day be flooded by rising sea levels and human’s unrelentingly desire for infinite growth will inevitably lead to the extinction of our one Earth.

The final artwork ‘Prisoner’s Dilemma’ considers the dwindling natural resources of Earth and the notion that mankind will soon face apocalypse- even the grandiose ‘Statue of Liberty’ falls to her kneels and prostates, in front of portraits of deceased terracotta penguins, in utter remorse. Huang calls the USA to ‘account’ for ‘policing’ the world, yet rejecting to commit equal action on climate change. The artwork is a severe warning to audiences that animals such as penguins will one day become committed to funerals as sacrifices- if mankind continues to plunder nature out of greed.

Having spent about 10 years creating eco-art, Huang is no stranger to working in unexpected contexts and enjoys creating eco-projects that are designed to provoke, stimulate and cause reaction. Over the years he has dedicated his art to promoting awareness and preventing global warming receiving widespread international media attention. Huang says

“I was drawn to Tuvalu because of its tragic situation- a non-industrialized country that produces nearly zero carbon emissions-how is it fair that it should be the first country in the world to sink below sea level as a consequence of emissions from developed countries? I hope through art to send a message to the highly industrialized nations that they need to consider their technological advancement can also bring about environmental crises and cause dire natural calamities.”