Markus Schinwald's mechanical theatre is a space made to measure for the CAPC's nave, "which gropes as much as it traps". 'A Visceral Eye' is the most comprehensive retrospective to date of Welsh-born realist painter Sylvia Sleigh. Pauline Boudry/Renate Lorenz' film installations and archives often revisit materials and practices from the past. By managing various careers, David Lieske confuses the classic identity of the artist and raises cultural, economic, social, abstract and political questions. 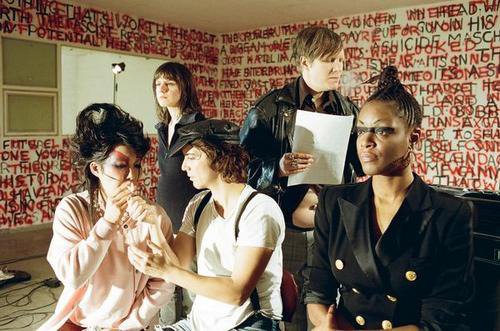 curated by Alexis Vaillant, Chief Curator at the CAPC museum of contemporary art of Bordeaux

The CAPC’s nave is plunged in darkness. A gigantic brass tubular structure straddles the space. Painted skies and retouched portraits hanging on wires are being as if launched into the void. The walls are covered with Brinjal. Tumblers play chess and children’s puppets bang the metal tips of their shoes on the floor. A spiral Eiffel stairway links the floor and the ceiling, 45 feet high. Large hangings hide the architecture, a double mirror projection of the film Orient spins in a loop and looks at itself from a huge triangular bench which cuts the nave in four. A false ceiling with holes in it lets through a purplish light, while a figure on a suspended diving board vibrates with the variations of light. Welcome inside Markus Schinwald’s mechanical theatre. A space made to measure for the CAPC’s nave, which gropes as much as it traps.

For a decade or so, Markus Schinwald has been dividing his life between Vienna and Los Angeles. Between Freud and Lynch, Prater and Mulholland Drive, Biedermeier and the Black Sun. He moves from one world to the other the way people switch channels. In a trice. With the same fluidity, he tacks between performance, visual arts and films, without sticking to any particular medium. Schinwald came to art via fashion and theory, and displays a pronounced liking for detail and curiosity, a fascination which sets his oeuvre in the depths of contemporary desire, alienation and fetishism.

Markus Schinwald was born in 1973.
He lives and works in Vienna.
His work is represented by the Yvon Lambert gallery in Paris, and Gio Marconi in Milan.

A Visceral Eye is the most comprehensive retrospective to date of Welsh-born realist painter Sylvia Sleigh (1916–2010) who gained critical success in the 1960s and ’70s as an important instigator of New York’s feminist art scene. Known for her explicit male nudes that quote and subvert the art historical tradition of male gaze onto female body, Sleigh’s portraits feature artists, musicians and writers of both genders, dressed and naked, representing a pantheon of significant cultural figures. Exploring contemporary portraiture as an intimate dialogue between artist and sitter, Sleigh’s practice elevated her subjects, aiming to remove objectification from art. In these portraits, she combined bold sensuality with a personal feminism that placed her at the heart of a discourse on power, representation, and gender.

The exhibition is a joint production by the Kunstnernes Hus, Oslo, the Kunsthalle, Sankt Gallen, and the CAPC musée d’art contemporain, in Bordeaux. It will be shown at the Tate Liverpool and the Centro Andaluz de Arte Contemporáneo in Seville.

Pauline Boudry/Renate Lorenz' film installations and archives often revisit materials and practices from the past, usually photographs, films, texts or songs that under/mined normalcy. Mostly shot in (super-) 16 mm their staged films show distinctive aesthetics that highlight the autonomy of the camera, music, costumes and props and give rise to performances that they define as "temporal drag". Their works show embodiments which are not only able to cross different times, but also to draw relations between these different times, thus revealing possibilities for a queer futurity.

Pauline Boudry and Renate Lorenz live and work in Berlin and collaborate since 1998.
Their last film installation, Toxic, was presented at the Paris Trienniale 2012 as well as in the South London Gallery, the films No Past/ Future were presented at the Swiss off-site Pavilion of the Bienniale of Venice in 2011.

Just one year before the Artist David Lieske (b. 1979) opened Mathew, a contemporary Art-Gallery in Berlin, he theatrically declared his lack of interest in continuing his own artistic production with the exhibition: "Style and Subversion 1979-2012" (Corvi-Mora , London 2012).

Now, The "Estate of David Lieske" manages the information and images that his work used to generate.
A practitioner in the broadest sense of the term, Lieske is also a musician and a producer of electronic music for Dial, the record label, he founded with Peter Kersten in 1999. By managing various careers, Lieske brilliantly confuses the classic identity of the artist and raises cultural, economic, social, abstract and political questions about the requirements of a hyper flexibilized post network capitalism that he finds himself operating in. Just as he announced with his show in 2008: "Everything the doesn't happen today, doesn't happen." (Galerie Buchholz 2008)

David Lieske was born in Hamburg in 1979.
He lives and works in Berlin, and has had recent exhibitions in Leipzig, New York, Berlin and Tel-Aviv.