On occasion of the 25th anniversary of the Generali Foundation, 3 international curators will each design an exhibition using very different presentation formats to reflect, on the Foundation's collection. Helmut Draxler focuses on the complex interrelation between the principles of collecting and exhibiting. 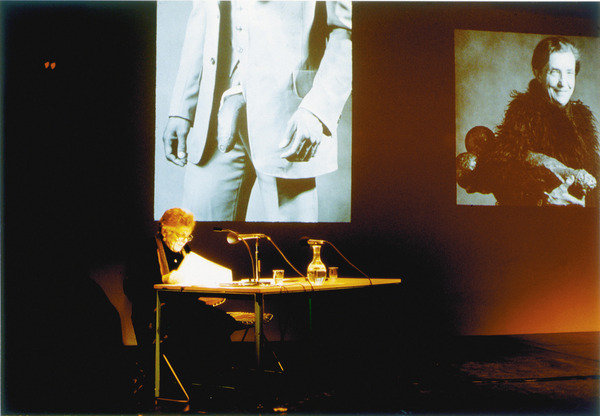 The Content of Form —the second exhibition on occasion of the 25th anniversary of the Generali Foundation—is meant to be more than merely a selection from the Foundation’s collection: it is a curatorial-discursive project examining the collection as a principle. It explores the different modes of aggregating, arranging, and displaying that collections have generated and still generate, peculiar symbolic forms that profoundly inform the self- conception of modernism between knowledge and order, imposing presentation and power, accumulation and profusion.

A wall design of colors, texts, objects, and reproductions of installation views from the history of the Generali Foundation unfolds along the three fundamental concepts of “representation,” “conversation,” and “genealogy,” modeled in the exhibition by details from historic paintings by David Teniers, Johann Zoffany, and Hubert Robert; it forms the setting to which the selected works on display relate, embedding them in concrete discursive and institutional contexts. Yet the principles of the collection are also frequently evident in the inner formal organization of the art itself. The repetition, variation, and modulation of these modes of aggregating, arranging, and displaying inspire most of the works on the levels of method as well as content. The show thus reveals how works, exhibitions, and the collection are interrelated modalities of symbolic production whose forms of interaction allow a particular institutional politics to be realized.

Representation
The grid as the organizational principle governing the collection appears early on, in David Teniers’s Archduke Leopold Wilhelm in His Gallery at Brussels (1651). It shows how individual paintings are consolidated to form “picture walls,” which in turn constitute spatial arrangements by virtue of their interrelations that impose a multidimensional structural framework on the individual paintings. Such arrangements are a frequent theme in modern and contemporary art, making for an evident point of connection between individual works such as Gerhard Rühm’s l’essentiel de la grammaire from the early 1960s and the diagrammatically sprawling collages of Stephen Willats (1979–1980). Meanwhile, the rooms by Hélio Oiticica, Luis Camnitzer, and Marta Minujín from the exhibition vivências at the Generali Foundation (2000), which, in the pictorial form of installation shots, constitute a layer of signification and reference within the wall design, may be seen in relation to the grid-like design principles of media and war technologies in the work of Harun Farocki.

Conversation
Another painting, Johann Zoffany’s La Tribuna degli Uffizi (1771–78), opens the second section of the exhibition. It shows the octagonal room at the Galleria degli Uffizi, where works including the Medici collection of High Renaissance art are on display. The painting further accentuates representation in that the individual works of art are not only arranged by the artist Zoffany in the role of “curator”; a community of art lovers simultaneously engages closely with them, discussing and touching them and, in the exchange of ideas, appropriating them both socially and psychologically. The exhibition The Content of Form associates Zoffany’s paintings with contemporary models of artistic conversation, for instance, between the work of art and its users (Franz West), among the performers (Lygia Clark), between artists (Fareed Armaly and Heimo Zobernig), between the lecturer and his audience (Rainer Ganahl), or even between media and institutions (Fareed Armaly, Dorit Margreiter).

Genealogy
Finally, Hubert Robert’s painting showing the Grande Galerie of the Louvre (1796), the point of departure for the third section of the exhibition, illustrates the genealogical dimension: the gallery itself becomes a time tunnel leading from the past into an unforeseeable future. Robert’s picture may be used as a benchmark for the manifold transfers of spatial into temporal principles of design, such as the work by Apolonija Šušteršič, which translates the spatial elements of Le Corbusier’s architecture directly into musical forms. The photographs from earlier exhibitions at the Generali Foundation, from The Making of ... to Violence is at the Margin of All Things , not only document further such methods, they simultaneously also represent their own sequence and hence their historicity.

The fragility of the collection
Collections generally tend to neutralize the critical potentials of the works, and so require an effort of updating that concerns the spirit rather than the well-rehearsed forms of the laws of representation. The exhibition The Content of Form accordingly raises the question of how the collection can reflect on its own—corporate, institutional, spatial, and discursive—system of reference. One way to spur such reflection is to use monitors to connect the concrete exhibition space to the collection, to the depot, the corporate leadership, and the public sphere.
The forward-looking optimism implicit to any institutional politics, moreover, is put into perspective by elements of an aesthetic of the ruinous. One of the ceiling panels seems to be about to fall out, mold is spreading in a corner, historic radiators mar the elegance of the modernist architecture, and it seems that the exhibition setup team forgot to remove several pieces of transport equipment from the gallery. A mind-map featuring Fantasy elements specially designed for Harry Potter fans offers an introduction to the historic-dynamic cosmos of the collection as a specific form of institutional politics.

Last but not least, a program of events will explore issues in cultural policy, the institution, and the politics of collecting and exhibiting, issues that concern not only the concrete collection but the Generali Foundation as a project in its entirety—which is to say: the abyss on which these “foundations” between corporate culture and cultural aspiration rest.

Helmut Draxler is an art historian and cultural theorist; he lives in Berlin. He was director of the Munich Kunstverein from 1992 to 1995 and professor of aesthetic theory at the Merz Akademie Hochschule für Gestaltung, Stuttgart, from 1999 until 2012. He was a member of the Generali Foundation’s Artistic Advisory Board from 1992 to 1994. Between 2004 and 2006, Draxler was involved in the research project “Film and Biopolitics” at the Jan van Eyck Academie, Maastricht (with Sabeth Buchmann and Stephan Geene). Since January 2013, he has been professor of art theory and art education at the Academy of Fine Arts, Nuremberg. Current research foci include a theory of intermediation and the thinking of history in the historiographies of modern and contemporary art. Draxler has also curated exhibitions, including Shandyism: Authorship as Genre at the Vienna Secession (2007). He has published widely on the theory and praxis of contemporary art. Writings include Gefährliche Substanzen: Zum Verhältnis von Kritik und Kunst (Berlin: b-books, 2007); Die Gewalt des Zusammenhangs: Raum, Referenz und Repräsentation bei Fareed Armaly (Berlin: b-books, 2007); Film, Avantgarde, Biopolitik (with Sabeth Buchmann und Stephan Geene, Vienna: Schlebrügge Editor, 2009); and Theorien der Passivität (coedited with Kathrin Busch, forthcoming, Munich: Fink).