Were I made of matter, I would color. The first retrospective to trace the evolution of her art drawing out connections between her early years as a dancer in the 1970s and 1980s, her sculptural settings and actions, and her most recent work. 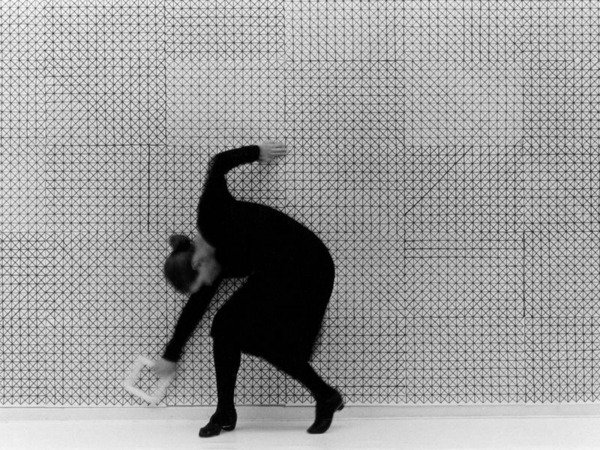 The most comprehensive retrospective to date of the work of Ulrike Grossarth is the first exhibition to trace the evolution of her art through all major divisions of her oeuvre, drawing out connections between her early years as a dancer in the 1970s and 1980s, her sculptural settings and actions, and her most recent work, which touches on issues in the history of ideas and history more generally.

“Making works of art is of secondary importance to me—what I’m interested in is creating radical and vivid spaces for thinking, spaces people can actually experience and use,” Ulrike Grossarth describes her artistic approach. BAU I (1989–2000), a complex of works that is central to her entire creative oeuvre, is an experimental ensemble addressing issues of “unmoved object-bodies” created over a period of more than ten years that has been presented in a wide variety of constellations and will be the point of departure for this exhibition. As an attempt to visualize changed spaces of thought and action, BAU I bridges Grossarth’s early work, which is informed by Fluxus, punk, and the attempt to come to terms with the postwar era, and her later art with its focus on Eastern Europe. In the so-called “Lublin projects” (since 2006)—Szeroka 28, Fabrics from Lublin/Bławatne z Lublina, running Lubartowska, and the most recent complex of works, SYMBOL gotowe/Subject Aggregates—the artist seeks to reanimate lost cultural traditions. Of particular significance in these works is the artist’s engagement with phenomena of Jewish mysticism and especially with the motif of the Shekhinah, a complex and potentially integrative figure whose activation poses a challenge to Occidental thought.

Hannah Arendt’s book The Human Condition (1958), in which human life is described as defined by "three fundamental human activities" of labor, work, and action, is a central reference for Ulrike Grossarth. Action, Arendt argues, is the "actual underlying human capacity" that is "irreversible" and "engenders forces without precedent in the household of nature." Grossarth has applied this concept of action to her own artistic practice and developed a method of empirical research based on what she calls public exercises. The artist regards these studies—the most recent ones were conceived as travel projects (Hungary, Poland, Serbia, Czech Republic, Ukraine)—as "series of exercises in how to overcome rigidified cultural modules." To use the words of Arendt, this "new science" cannot be of merely "theoretical capacity" and then be applied to selected examples from the world of bodily existence; it arises from an action that, aware of its entanglements and the conditions that sustain it, sets sequences of events in motion "whose outcome is uncertain and unpredictable."

Ulrike Grossarth was born in Oberhausen, Germany, in 1952 and lives and works in Dresden and Berlin. She studied Artistic Dance at the Else-Lang-Schule, Cologne (1969–72), and at Folkwang University (1972–74). In 1974 and 1975, she attended the Palucca Hochschule für Tanz Dresden. In 1980, she set up the Essen branch of the Free International University initiated by Joseph Beuys. Grossarth has been professor of Expanded Concepts of Art / Mixed Media Art at the Academy of Fine Arts Dresden since 1998. In 2009, she received the Käthe Kollwitz Award of the Berlin Academy of Arts.