The exhibition displays and brings together the works of art of a generation of artists affected by extreme metal, accompanied by a few others who were pertinent witnesses of this musical scene or brilliantly contributed to shaping its iconography. With Matthew Barney, Banks Violette, Damien Deroubaix, Larry Carroll... 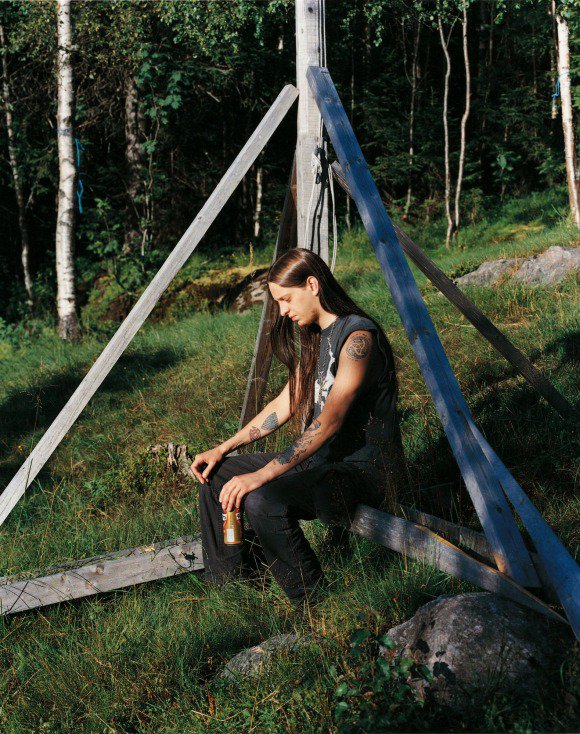 Extreme metal emerged in the second half of the 1980s through three distinct musical genres with different principles, aesthetics and evolutions: grindcore, death-metal and black-metal. Like all underground cultures, extreme metal is not something that can simply be passed on: you have to experience it on your own. And so it appears that some artists, whose works have been deeply affected by it, started to get involved in the extreme metal scene at a time when they were far from imagining that one day their ideas would become works of art.
The Altars of Madness exhibition project displays and brings together the works of art of a generation of artists affected by extreme metal, accompanied by a few others who were pertinent witnesses of this musical scene or brilliantly contributed to shaping its iconography. Following the three musical genres of extreme metal and their different characteristics, the exhibition is divided into three parts.

Lucid fairytale
The first part concentrates on grindcore and emphasises the political dimension of extreme metal. Having its source in the 1980s punk movement, grindcore bands treat above all political subjects such as anarchy or anti-capitalism, and are characterised by a discursive and aesthetic radicalism. Labelled as "noise not music", grindcore is deliberately anti-musical, abrasive and uncomfortable, which is visually reflected by anti-aesthetic, aggressive and irritating characteristics. Artists such as Mark Titchner, Damien Deroubaix, Juan Pablo Macias, Nicholas Bullen or Gee Vaucher all deal with political themes, revealing and accusing the abject reality of our contemporary world.

Death is just the beginning
The second part is related to death-metal, which, similar to the "memento mori" and vanitas symbols in classical paintings, reminds one of death. Through morbid and violent lyrics as well as album covers depicting cranes and Bosch or Bruegel-like metaphors of our fears, death-metal bands explore the death as the ultimate and inevitable end. Some of the participating artists, for example Matthew Barney, Steven Shearer or Gregory Cuquel, have chosen to incorporate the "symbols" of this culture (instruments, styling, logos), while others - like Larry Carrol, Gregory Jacobsen or Maël Nozahic - have created more introspective works, violently exploring our fears and ambiguities through monstrous or morbid figures and apocalyptic landscapes.

Dark matter landscape
The third part of the exhibition concentrates on black-metal, a genre that oscillates between extreme speed and more "ambient" parts. A dark and depressive mood is paired with a fascination for violence, crimes and the macabre. Assuming a nihilistic and pagan position, black-metal refers to both the Nordic gods and the incarnations of the evil. Particularly rich on a visual level, black-metal inspired numerous artists. Noteworthy are the typical black and white make-ups as well as the design of the covers illustrating corpses or Nordic landscapes. The landscape, also recalled by the song titles, adds a romantic and symbolist note to black-metal and is a recurring theme in this part of the exhibition, especially in the works of Torbjorn Rodland, Seldon Hunt and Theodor Kittelsen. Other artists such as Banks Violette, Elodie Lesourd or Harmony Korine refer directly to specific black-metal bands, their cover art and logos, or to the codes of this genre (make-up, Satanism, violence).