A reference to "after tears" parties held in the wake of funerals in black South African townships. A project exploring the operational strategies of Center for Historical Reenactments (CHR). 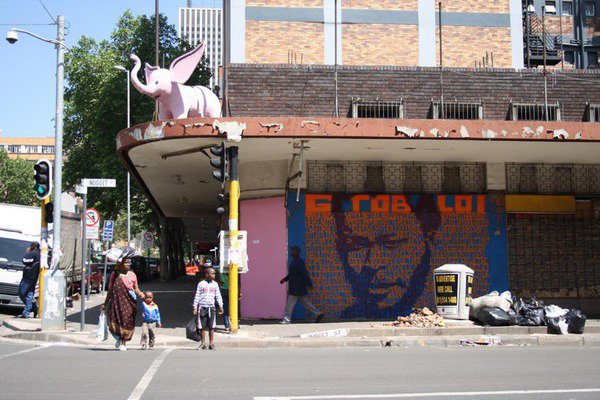 New York, NY...This spring, the Museum as Hub will present “After-after Tears,” a project exploring the operational strategies of Center for Historical Reenactments (CHR), a Johannesburg-based platform founded in 2010, currently in residence at the New Museum. Over the course of two years, CHR gained local and international recognition through diverse projects that mobilized around historical events and sites in order to explore how officially obsolete systems and ideologies continue to condition contemporary life. The exhibition is on view from May 22–July 7, 2013, in the New Museum’s Fifth Floor gallery.

“After-after Tears”—a reference to “after tears” parties held in the wake of funerals in black South African townships—is a fitting frame for a project that follows CHR’s decision to commit an institutional “death” in December 2012. This act ended the collective’s previous activity—a decision to not simply conclude a single phase but rather to challenge the way institutions ossify around methodology, purpose, funding structure, and form. The exhibition encompasses commissioned installation, video, and performance work developed during CHR’s residency at the New Museum. The project makes reference to significant sites, events, and source materials from their previous two years of activity, which present architectural anchors and historical sightlines that examine the collective’s working philosophy and probe key questions that shaped its formation. “After-after Tears” considers how acts of refusals haunt spaces after they are staged.

On May 18 at 2 p.m., CHR will present an idea in development through the New Museum’s signature Propositions series. The Propositions presentation will feature contributions by artist Kader Attia, Khwezi Gule, Chief Curator at the Soweto Museums, and Sohrab Mohebbi, writer and Curatorial Assistant of Public Engagement at the Hammer Museum. Additional programs and performances are scheduled during the run of the show. Visit newmuseum.org for more information. “After-after Tears” is conceived for the New Museum by CHR members, Donna Kukama, Gabi Ngcobo, and Kemang Wa Lehulere, and organized by Ryan Inouye, Assistant Curator, Museum as Hub.

About Museum as Hub
Museum as Hub facilitates exchange and dialogue around international art and ideas. Founded in 2007, the initiative includes exhibitions on the Museum’s Fifth Floor, as well as residencies, commissions, public programming, and editorial and digital projects. Through support of contemporary art practices, the Museum as Hub aims to catalyze future exchange and collaboration around the world. Since its launch in 2007 by the New Museum, the Museum as Hub initiative has worked closely with a group of founding partner institutions—art space pool, Seoul, Insa Art Space, Seoul, Museo Experimental El Eco, Mexico City, Museo Tamayo, Mexico City, Townhouse Gallery, Cairo, and the Van Abbemuseum, Eindhoven—to produce diverse programming at the New Museum and internationally.

Support
Museum as Hub is made possible through the generous support of the Robert Sterling Clark Foundation. Support is also provided by the New York City Department of Cultural Affairs and the New York State Council on the Arts with the support of Governor Andrew Cuomo and the New York State Legislature. Endowment support is provided by the Rockefeller Brothers Fund, the Skadden, Arps Education Programs Fund, and the William Randolph Hearst Endowed Fund for Education Programs at the New Museum. Education and public programs are made possible by a generous grant from Goldman Sachs Gives at the recommendation of David and Hermine Heller.