A program of nine exhibitions and events with over 30 international artists and thinkers examining the theme of hospitality. The complex obligations, tensions and generosity between hosts and guests are explored through painting, photography, video, installations, performance and public discussions, touching on philosophy, politics and more. 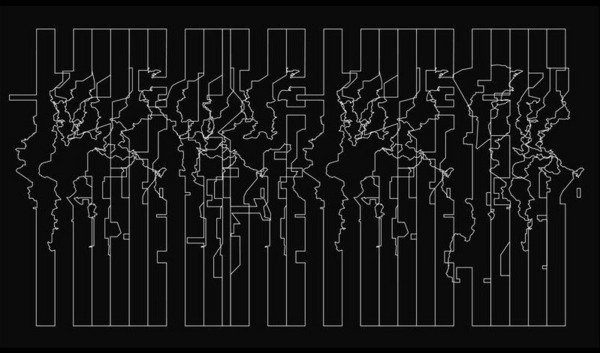 A program of nine exhibitions and events with over 30 international artists and thinkers examining the theme of hospitality. The complex obligations, tensions and generosity between hosts and guests are explored through painting, photography, video, installations, performance and public discussions, touching on philosophy, politics and more.

Raqs’ project is titled Will You, Beloved Stranger?. The project is based on the works of two great poets, Yehuda Amichai and Mahmoud Darwish. Two actors in performance in the museum will read Amichai’s and Darwish’s poems in English, and selected selections of the poems will be merged together, forming new poems. The performance will be done live during the exhibition’s first three days and will also be videoed and shown during the duration of Host & Guest. The texts will be laser cut on sheets of paper that will be hung on frames created for the installation. As they write in their catalogue essay: “The fact that the language of a previous occupying power that imposed itself on other language speakers is today the only effective bridge between those who speak the language of the present occupying power (Hebrew speakers) and those who think that their occupation has not yet ended (Arabic speakers) complicates the issues of the relationship between host and guest that our work here seeks to address. This linguistic confluence takes on the etymological origin of the term host, which carries within it a labyrinth of meanings, including a sense of animosity (as in hostility) as well as generosity (as in hospitality).”

The project is titled “Embodied Archeology of Architecture and Landscape.” It is a series of six public screenings and conversations at the Tel Aviv Museum with artists she has worked with collaboratively over time. As Cohen writes in her catalogue essay, “Our interest here lies more broadly in an inquiry into different methods of constructing and demolishing history and memory. In this context, archeology (as much as architecture, but at a different pace) must be understood as a powerful tool: deciding which layers of time are relevant to be documented and which ones are only obstructing the next layer and should therefore be physically removed. The notion of “Archeology of Architecture and Landscape” considers the superimposition of material and immaterial structural layers as they reside as presences in everyday life, and the ways in which artists approach these strata. How do they address the recent history of places and spaces we inhabit, along with the existence of this history as a field of forces in the present that can be sensed and continuously transformed even if it isn’t necessarily visible?” Artists and others taking part with her include, Kasper Akhøj, Galia Bar Or, MabeBethonico, Angela Detanico and Rafael Lain, Zvi Efrat and MeiraKowalsky, DorGuez, Armin Linke, Renata Lucas, YehuditSasportas, and David Tartakover.

Schedule of Encounters – Tel Aviv
*All the sessions will be held in English, from 7 to 10 pm, at the Kaufmann Auditorium at the Tel Aviv Museum

May 20, Monday
Armin Linke (artist, b. 1966, Milan, based in Berlin)
Screening: ALPI, 2011
16mm, transferred to Blu-ray disc, color, 60min.
(A film by Armin Linke based on a research project by Piero Zanini, Renato Rinaldi, and Armin Linke)

May 21, Tuesday
Mabe Bethonico (artist, b. 1966, Belo Horizonte, Brazil)
Presentation: Collecting the World: Slide and Side Stories, 2013 – (under construction)
A slide projection with material from the Museum of Ethnography of Geneva produced by Swiss traveler and geographer Edgar Aubert de la Rúe, for a stream of visual ideas and speculations around apprehension, tourism, and far-away and near landscapes.
Galia Bar Or(director of the Museum of Art, Ein Harod, Israel)
Presentation: Our Life Requires Art
Conversation Mabe Bethonico and Galia Bar Or, moderatedby Ana Paula Cohen

May 22, Wednesday
Angela Detanico and Rafael Lain (artists, b. 1973 and 1974, Caxias do Sul, Brazil, based in Paris)
Screening/Presentation: Lexicon
Ana Paula Cohen
Screening/Presentation:Introduction to the archive of interviewsLygia Clark, from object to event, developed by Brazilian psychoanalyst and curator Suely Rolnik, with the intention to activate the twenty-sixyears of corporeal experiments (1963-88) by the Brazilian artist Lygia Clark (Belo Horizonte, 1920–88).
Conversation: Angela Detanico and Rafael Lain (via SKYPE) and Ana Paula Cohen

Dor Guez(artist, b. Jerusalem, 1980, based in Tel Aviv)
Screening/Presentation:Photographs, like a sort of embodied, physical subconscious: different layers of demolition of the local landscape.
Conversation:Kaper Akhøj and Dor Guez, moderated by Ana Paula Cohen

Meshulam Riklis Hall
Simon has created a three-hour event in the large entry hall of the museum’s main building. The name of the event is “Overtime” and will be staged as a dramatic tribunal. The main participants will be AsmaAghbarieh-Zahalka, Tahel Frosh, DaphniLeef, YotamMarom, Haggai Matar, Iris Meyer, Caleb Waldorf, and Noam Yuran. He writes in his proposal: “The notions at the heart of ‘Overtime—A Public Hearing’ stem from the ongoing realization that labor has left the employment market to become all-present – in our social and mental exchanges, emotional and ephemeral practices, our intellectual as well as our consumerist habits. The ‘Overtime’ of labor that we each put in is what generates value (even without any system of pricing and compensation like the one based on working hours in the employment market). This event in the museum gives an account of this fact as it identifies each audience member as a worker. The discussion will bring together the members of the committee of ‘experts’ comprised of international and local thinkers about the subject, along with the public, who will debate a series of questions that are key to understanding the role of the museum in relation to the communities it is hosted by and those it hosts.”

Image: Angela Detanico, Rafael Lain - A Given Time In A Given Space (Zulu Time), 2007

More informations on the project:
www.hostnguest.tumblr.com