We have arrived nowhere 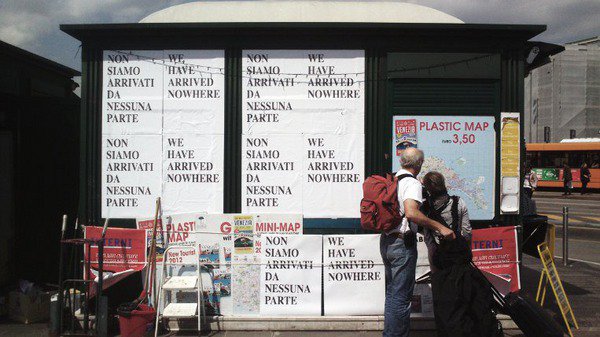 Transnational Pavilion is an independent and self-funded initiative, founded by Mihaela Brebenel for the 54th Venice Biennale.

The 2nd Transnational Pavilion at the 55th Venice Biennale revolves around the lack of presence. The lack is here not understood in psychoanalytical terms, therefore not linked to desire, drive or gaze. It is the straightforward absence from the scenery, as in a diorama missing a rear foot of a gazelle, or the gap in a film strip where the projectionist subtracted one frame of a black and white celebrity or a nude part of a woman’s body. Therefore, this absence is not nostalgic either, nor is it longed for by anyone. It once was there, but it is not truly missing either.

This kind of absence characterizes the Transnational Pavilion at the 55th Venice Biennale. A concept exists. A list of artists also features in this communication. As such, this absence shall therefore not be understood as any form of retreat, unobserved debris or miscellaneous otherness. On the contrary, this absence is simply a continuation of a reduced scale, which started two years before in the cloud of questions around the grand-scale event which is the Venice Biennale.

Known to most West Africans, the Bantu proverb made famous by the Nigerian writer Chinua Achebe during an interview with the Paris Review: "There is that great proverb — that until the lions have their own historians, the history of the hunt will always glorify the hunter." The program of the 2nd Transnational Pavilion is questioning the act of omission of an artist from a grand happening such as a biennale, reflecting on the geo-political, inner-art conflicts and an economy of funding that brings together such a happening. It questions the scale and economics of the event, and the act of inviting a certain nationality to present a pavilion announcing their arrival onto an accepted world stage.

The 2nd edition of the Transnational Pavilion takes place in 12 commercial places in Venice and it engages 22 international artists. The shops and their glass windows could already be considered anti-nationalistic pavilions, where different typologies of goods, from all over the world, are collected and displayed. The Transnational Pavilion invites artists to camouflage their texts, objects, photos and videos in certain shops and their displays integrating their practice in both local and global commercial activities. These uncommon pavilions are addressed to tourists, Venetians and the art public, without invitation.

Mihaela Brebenel is a visual studies researcher and artist from Bucharest, Romania. She has completed her MA in Film and Screen Studies (2010) and is currently an AHRC PhD candidate (2011 -) at Goldsmiths, University of London. She is also a Visiting Tutor in Screen Cultures at Goldsmiths. Her doctoral project is on affective spectatorship, aesthetics, politics and event in moving image art, focusing on the case of contemporary Romanian works.

Francesca Chiacchio is an independent curator interested in the meaning of “recognition”: from the dichotomy between the possible and the real, in both art as reconstruction of real space and art as gesture to underline the reality. She has been the curator in residency in the gallery of erg 50°49'19.50''N 4°21'25.53''E (Academy of Art in Brussels, Belgium) from March to June 2012 and of the collective La Carrozzeria Margot in Milan (Italy) from the 2010 to 2012. In 2011 she made a lecture in Rachna Sansad Academy of Fine Arts and Craft in Bombay (India) with the curatorial group Clark House Initiative. She has been selected for the residency Suddenly (Beauchery-Saint-Martin, France) in 2013. She graduated in History of Contemporary Art in La Sapienza in Rome (2011).

Zasha Colah co-founded blackrice in 2008 in Nagaland, and the Clark House Initiative in Bombay in 2010, after studying art history at Oxford University and curatorial studies at the RCA, London. She was the curator of modern Indian art at the Jehangir Nicholson Art Foundation at the CSMVS museum (2008-2011), and was head of Public Programs at the National Gallery of Modern Art (2004-2005) in Mumbai. In 2012 she co-edited 'In Search of Vanished Blood' a monograph on artist Nalini Malani for documenta 13, and she curated two exhibitions of Burmese art, 'Yay-Zeq: Two Burmese Artists Meet Again' at ISCP New York and 'I C U JEST' in Kochi.

Sumesh Sharma's practice is informed by cultural perspectives of political and economic history. Histories of communities in India, language religion and politics in Francophone Africa, and immigrant identities in Europe, form part of his research. He was part of the second edition of the Gwangju Biennale International Curators Programme 2010 in South Korea. In 2011 he curated the 5th Ayodhya Film Festival, 'Simon Liddiment', 'Published in Dissent'. In 2012 he curated 'Arranging Chairs for Ai Weiwei', an exhibition at Clark House, and 'Chicko: This used to be my hometown' as a collateral exhibition of the Kochi-Muziris Biennale. Most recently he has curated an exhibition, 'L'exigence de la saudade' at Kadist Art Foundation Paris.