A retrospective of Gianni Piacentino, he constantly probing the boundaries and the complexity of the links between art and design. Auguste Orts: the project explores a selection of works by the artists via two programmes, with Herman Asselberghs, Manon de Boer, Sven Augustijnen and Anouk De Clerq. 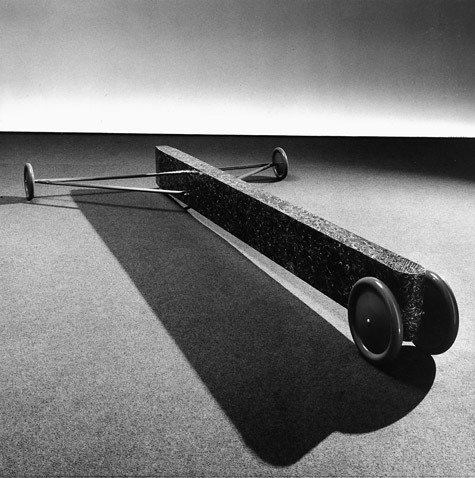 This summer the Centre d'Art Contemporain Genève is pleased to be hosting the first retrospective of Gianni Piacentino, one of the most inventive Italian artists of the second half of the 20th century. Initially associated with the Arte Povera movement, he went on to develop a vocabulary of his own that is constantly probing the boundaries and the complexity of the links between art and design.

The artists contributing to this project work mainly with film and video, and while their practice remains close to visual art, it frequently also requires the economy, expertise and models such as tend to be found in cinema. This is not alwaysstraightforward, given the differences that exist between these two spheres in terms of process. In 2006, Herman Asselberghs, Sven Augustijnen, Manon de Boer and Anouk De Clercq decided to form a group, in the first place so as to have to handmeans of distribution and production that would allow them to move more easily between the art world and the film industry. Their office, which was located in rue Auguste Orts, took on the identity of a somewhat obscure historical figure: Auguste-Englebert Orts, a nineteenth-century lawyer, historian and liberal politician, after whom this broad Brussels thoroughfare was named in 1877, three years before his death.

But beyond this pragmatic association, shared sensibilities and subtle links may be discerned at different levels, freed from recurring and consensual ideas and notions, sometimes touching and responding to each other, at others formally or conceptually at variance; a polarity that generates meaning and competition – in the most fruitful sense of the term. Certain elements may thus be seen as establishing family links between one work or another, spontaneously, or at any rate apparently without premeditation. Such an assessment calls to mind free association as a posssible metaphor, evoking Freud and this central method of psychoanalysis.

The project at the Centre will explore a selection of works by the artists via two programmes, each extending over a month and a half. The first, which includes films by Herman Asselberghs and Manon de Boer (5.06 to 21.07) illustrates in particular thepredominance of an experimental documentary form, one that is sometimes constructed on the motif of absence of presence, at others with the aid of fictional elements, often taking the portrait as a key reference point. A certain culture of attention and attentiveness is a crucial aspect in the four artists' practice, as is the relation to sound, and of sound to image. The second programme, which consists of works by Sven Augustijnen and Anouk De Clerq (23.07 to 8.09), confronts the ghosts of colonialism with 3D animations of places devoid of all human presence, which thus offer a surface onto which thoughts may be projected.
One intangible yet crucial element remains; the political potential of filmic practice to make it possible to challenge oppressive systems or devise experimental ways of life, combined here with experimental aesthetic pursuits that are free fromconventional structures.

Screening evening on September 3rd, 2013, in the presence of Sven Augustijnen and Manon de Boer