The exhibition seeks to probe the documentary value of photography. Whether we are producers or viewers of photos, we all seem to share the assumption that anyone recording images using an optical device is, in essence, providing testimony. With the works of almost 80 artists. Central show of 50JPG festival. 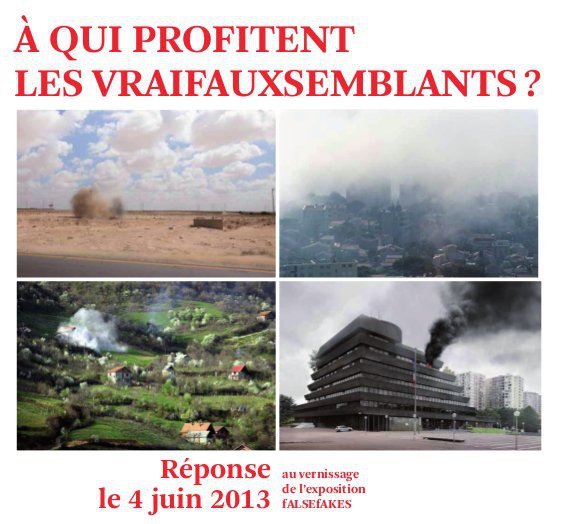 The central exhibition of 50JPG questions the documentary quality of photography. There is no doubt that we share the conviction that the production of optical images always operates as testimony of our tangible world. That scientific, positivist 19th-century belief has been shattered in contemporary capitalist societies by the virtualization of our lives and the turning of news into spectacle. And artists such as Jeff Wall or Cindy Sherman play a part in this by overturning photographic codes.

The exhibition fALSEfAKES – VRAIFAUXSEMBLANTS seeks to probe the documentary value of photography. Whether we are producers or viewers of photos, we all seem to share the assumption that anyone recording images using an optical device is, in essence, providing testimony. That assumption is so deeply rooted that even today, photography is widely considered a prime vehicle for delivering irrefutable evidence. Emerging in the nineteenth century, photography quickly gained credence as a tool for furthering scientific endeavour, both in the social sciences – history, art history, anthropology, sociology – and the natural sciences. Moreover, this status was strengthened by the contemporaneous rise of positivism, a philosophy that viewed verified data received from the senses as the source of valid knowledge of the world.

In present-day society, however, the ‘derealisation’ of human life has gone so far that it has become much harder to distinguish between real and fake, between documentary report and staged event. Unquestionably, still and moving images have a great deal to do with this blurring of distinctions, particularly because they are central to the spectacle- based perception that characterises today’s ultra-free market economy.
A momentous shift occurred eleven years ago, when the United States went to war with another country on the basis of fabricated evidence, including photos.
With such practices on the rise today, a vital question is who benefits from them. The answer is that by promoting the trend towards ‘spectacularisation’ of commodities, falsification serves the interests of the primary ideological prop for that trend – the bulk of the mass media – along with the interests of the military-industrial complex. But artists also resort to it. Ever since art as currently defined came into being during the Renaissance, they have continually used illusion and falsity to speak truth.

The problem in fact goes well beyond the ‘9/11 syndrome’ – an event often described as ‘larger than life’. Given that market society cannot realise its potential without reducing all aspects of life to spectacle, the false is a moment of the true. When commodities, or even false appearances, rule supreme – over everything from culture and love to health and the news, with ‘storytelling’ used to turn every event or experience into just another TV series – the terms ‘true’ and ‘false’ are voided of their original meaning and wind up with roughly the same standing.

The concept of documentary, which is less than a century old, is more celebrated than ever today, both in movies and photography. Yet documentary photography is increasingly becoming an empty shell. Starting in the late 1970s and early 1980s, artists began questioning the notion of ‘photographic document’. Cindy Sherman, Jeff Wall and others radically shook up the codes of authenticity that underpin all photography with a claim to documentary validity.
The term document goes back to a Latin word for ‘lesson, proof’. More recently, it has been defined as ‘a piece of written, printed or electronic matter that provides information or evidence or that serves as an official record’. Photography has indeed been equated with proof or evidence since its inception, when one of its inventors, William Henry Fox Talbot, put out the first published photo album with the telling title Pencil of Nature. Although he meant to convey the idea that nature had done the job itself, it obviously took a fair amount of human involvement for light rays to be able to produce images on photosensitive surfaces.
It is worth noting that in the second half of the nineteenth century, devotees of ‘spirit art’ showed a special fondness for photography. According to them, images were not produced by individuals who could claim direct credit for them, but by forces or spirits communicating through them. This current may be considered the dark side of the belief that with its claim to authenticity, photography necessarily serves the cause of science.

It is precisely such beliefs that we wish to call into question with fALSEfAKES – VRAIFAUXSEMBLANTS. It is commonly argued today that Photoshop has ushered in an era of photo hoaxes. But as stunningly highlighted by Faking It: Manipulated Photography Before Photoshop, a show that ended in January 2013 at the Metropolitan Museum of Art in New York, such manipulation is as old as photography itself.
The recent renewal of interest in photo archives has been accompanied by an almost mythical endorsement of analog media, considered more authentic than digital media now that digital content is being generated at uncontrollable speed, and with major doubts as to storage 50 years from now.

Photoshop is not a threat to the expression of truth today, nor will it be in the near
future. But what about the distant future? We tend to place our trust in the huge volume of images we absorb every day, and the underlying codes are crucial to how our society and our culture work. So while our belief in them can be undermined by what individual users and producers may do on the Internet and social networks, this is not an issue in the case of ‘institutional’ communication. If anything undermines or distorts our world view, our perception of the sensible world,
it is rather the fakes we encounter on a daily basis. Cities are built to recall times of old, food flavourings dispense with natural ingredients, we are promised infinite happiness – provided we can afford the consumer goods on offer, and so on. When a water company devastates ground water the world over, then demineralises and remineralises the same water using the company’s own standards and markets it under the trade name PURE LIFE, we are clearly dealing with fakery. This insight is what informed our choices in shaping fALSEfAKES – VRAIFAUXSEMBLANTS. Small wonder that the idea of documentary photography has taken such a beating. The documentary form has apparently reached a kind of breaking point that underscores its limitations under any and all economic or aesthetic conditions. It is against this backdrop that artists today show a growing tendency to seek the truth with the help of falsity, or to probe falsity so meticulously that we are inclined to mistake it for truth. In a world dominated by illusion, photographers capture illusion in much the same way as previous documentary photographers captured reality, except that the viewer may find it hard to tell the difference.

Focusing on still images and, to a lesser extent, moving images, fALSEfAKES – VRAIFAUXSEMBLANTS aims to provide insight into a trend that goes well beyond the issue of aesthetics. To give substance to the line of thinking developed above, the exhibition will showcase a large number of works by artists from Switzerland and abroad. Forming the core of the 50-day 50JPG exhibition, covering the entire space at the BAC’s Le Commun and the Centre de la Photographie Genève – a total of 700 sq.m. – fALSEfAKES – VRAIFAUXSEMBLANTS will at times echo our two previous exhibitions. Visitors will therefore encounter some of the issues dealt with in PHOTO-TRAFIC and LA REVANCHE DE L’ARCHIVE PHOTOGRAPHIQUE. The layout is designed to initially render the confusion so rampant in our society by juxtaposing works with unverifiable status. However, a second viewing, facilitated by the printed guidebook, should make it clearer to the visitor what the works on display are all about.

The catalogue of the exhibition fALSEfAKES – VRAIFAUXSEMBLANTS will be presented on Wednesday 19 June during the event OPEN SHOW SWITZERLAND at the BAC (18h30-21h).