A large retrospective of the French photographer Robert Doisneau; he is one of the most influential reportage photographers on record, whose work has not been on view in this country since the eighties. True or false? This question is central in the exhibition Veronique Bourgoin which consists of a space-filling installation. 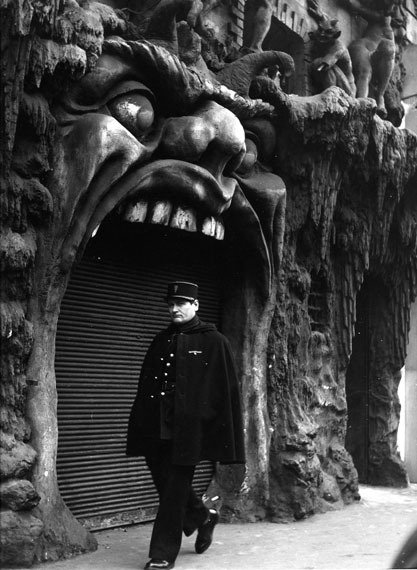 From 1 June to 1 September 2013 the Nederlands Fotomuseum presents a large retrospective of the renowned French photographer Robert Doisneau. Doisneau is one of the most influential reportage photographers on record, whose work has not been on view in this country since the eighties. The exhibition Robert Doisneau | Master Street Photographer contains 143 photographs and documents, including a number of photographic icons such as The Kiss at L'Hôtel de Ville of 1950, one of the most famous and favourite photos of the twentieth century.

Doisneau's photos tell the story of the streets of Paris from the time of the grave crisis of the thirties to the great changes shortly after the devastating war. Despite the dark times during which Doisneau was doing his work, his images convey hope. Among his themes are love, artless youth and silent longing. Doisneau captured the essence of French life on film. The Nederlands Fotomuseum proudly presents this exhibition that is in line with the ambition to highlight the canon of international documentary photography that has for so long been neglected in the Netherlands.

Robert Doisneau (1912-1994) discovered photography by the end of the twenties. During the forties and fifties he enjoyed great fame both nationally and internationally: in fact he was the best-represented photographer at the celebrated exhibition of photography The Family of Man (1955) in the Museum of Modern Art in New York. In his own country Doisneau received many prestigious prizes and awards, including the Prix Nièpce in 1956 and the Grand Prix National de la Photographie (1983). He was appointed Chevalier of the Ordre national de la Légion d'Honneur in 1984 and in the same year he was invited by the French government to photograph the Paris suburbs once again. This he did with a large size camera and in colour – and with a remarkably modern result.

Robert Doisneau photographed with his heart
As a photographer Doisneau was part of a vivacious cultural scene in Paris with celebrities from the worlds of literature, art, poetry and film. He was impressed by Atget, Kertesz and Brassaï, photographers with an excellent eye for architecture and the city. His interest in popular culture, language, the suburb and the demi-monde he shared with famous writers and poets such as Blaise Cendrars and Jacques Prévert in particular. Together they roamed the 'banlieues' of Paris and made many tours of pubs, bistros and places like Les Halles. All his life Doisneau photographed life in the streets of Paris in a way that was as committed as it was poetic, with much attention for the human sides of life.

This humanist approach was enhanced by his commissions for Rapho, a photojournalistic agency highlighting individuals and their stories. Doiseau focused on the individual and showed great respect for the people he photographed. He did not refer to himself as one hunting for images, but rather as an angler: one who calmly bides his time until something turns up that is worth photographing. His style is sometimes called 'poetic realism', where atmosphere is as important as the clear photographic rendering of the scene he records. Robert Doisneau is the maker of one of the best-known and most favourite photos of the twentieth century, The Kiss at L'Hôtel de Ville of 1950. Through his innumerable publications and exhibitions he has contributed the most to our picture of French life of all French photographers.

Exhibition
Doisneau, like other photographers of his time, was skilled in various genres within photography, from the reportage and the news to fashion, advertising, illustrating and politics. Doisneau is primarily known for his reportages, but in the course of his career he also worked in advertising and fashion – as an industrial photographer for Renault, for example, as a photojournalist for the Alliance Photo agency and for the fashion magazine Vogue as a staff photographer. In addition he made portraits of many famous artists such as Pablo Picasso and Alberto Giacometti and writers such as Blaise Cendrars and Jacques Prévert. His oeuvre is extensive and varied and very influential to this day. The exhibition in the Nederlands Fotomuseum comprises a significant segment from the estate of this legendary photographer, which has been administered under the name Atelier Doisneau by his two daughters since his death in 1994.

Thanks are due to Ministry of Education, Culture and Science | Municipality of Rotterdam | BankGiro Lottery | Prins Bernhard Cultuurfonds | Wertheimer Fonds | Mondriaan Fonds | OVG | Port of Rotterdam

True or false? This question is central in the exhibition Véronique Bourgoin: VRAI OU FAUX? | TRUE OR FALSE? ACT I & ACT II, which is on view in the Nederlands Fotomuseum from the 1st of June to the 1st of September 2013. The exhibition consists of a space-filling installation made by Véronique Bourgoin. Drawing on a vast collection of contemporary and historic photographs, this French artist is playing with the concepts 'true' and 'false'. This subject matter is central in a life-sized trompe-l’oeil installation where visitors are taken along in an illusory world. The exhibition opens on the 1st of June at 5.30 pm with a performance by Vero Cruz and the Hole Garden with a musical improvisation by Reza Azard and the Forty Dollar Baby in the Nederlands Fotomuseum.

Vrai ou Faux? emphasizes the subjective character of concepts such as 'true' and 'false'. 'Truth' and 'real' have become relative notions, both in and outside photography. The boundaries between real and artificial have been blurred, not only in the image (through forms of manipulation that are increasingly becoming accepted), but also as a consequence of the more and more radical relativization of 'truth' in society, economics, politics and even science. Experts and institutions are forfeiting their authority in favour of laymen. Views and opinions have come to be more important than knowledge and facts. The exhibition Vrai ou Faux? aims to visualize that transformation.

Trompe l’oeil
For the exhibition Vrai ou Faux?, Véronique Bourgoin designed an extensive trompe l’oeil installation in two rooms, with a setting of intimate living rooms. In these private environments she shows work from a variety of sources. The collection includes historic images, but also work by contemporary European artists and from daily papers and the internet. By means of a unique composition of images the installation aims to visualize the transforming effect of truth, on a local and international scale alike. Whether it concerns aesthetics, culture, the environment, the media, the economy or social behaviour, the role and significance of 'truth' is subject to change.