Group shows are a waste of time

Group; (gru:p) noun: a number of persons or things considered as a collective unit. 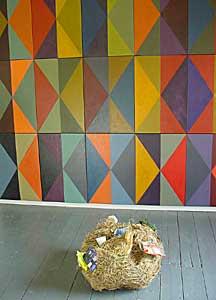 Group shows are a waste of time

group; (gru:p) noun: a number of persons or things considered as a collective unit.
show; (pdu) verb: to make, be, or become noticeable: to show one's dislike.

You start with scratching your eyes open
at midday,
clotted with a white tornado addiction you need to help you sleep like a kitten,
in a bed no cleaner than a tramps sleeping bag,
and a mouth like a lorry-driver's crutch
a brainless wonder
you definitely didn't sleep in the knife drawer
Kersplosh!
It's a 12-hour cycle of no exercise
with multi-vitamins and salt free crisps
and Darth Vader's watercolour box gets opened on Sunday's and then closed again.
The cowardly new-world of the bored creative type,
mindlessly waiting for the Advertising God to flick a teaspoon of originality down the stillborn throat of your career,
with your fuck the third-world rucksack
Wheyfaced, gelled hair, tight arsed,
you could fuck up a wet dream
Kersplash!
The high water mark of stupidity blemishes the new extension of the municipal museum on the inside, as yet another under educated curator gropes for meaning in the whirling spray of her nervousness to an audience of middle-aged Galilee storm-troopers, missing a game of zulu golf.
Outside 20 year-old piss is scrubbed off the concourse and the incinerator is switched on and filled to the brim with printed e-mails on the subject of:
Bringing a new audience into the gallery.
Kerdash!
for the dictionary
jaded by the wrinkles under 3:00 a.m. eyes
and another catalogue essay
and another never quite good enough conversation
and the always out of reach laughter
when your friends don't understand you through their mental hernias
as you smile a thousand pities
So now, you, Baron Toast scowl over your credit card statements as you look at the rotting window frames and remember when cash-point cards came out and you didn't trust them and you thought it would only be a matter of time before robots did your shopping.
Well now they can bring it to your door in orange fleeces with a pre-programmed resentment, de-humanised by your complaining about the Paul Newman salad dressing missing off your 2-page list.
Slow down, deaths on it's way, to us all.