Sex in the City 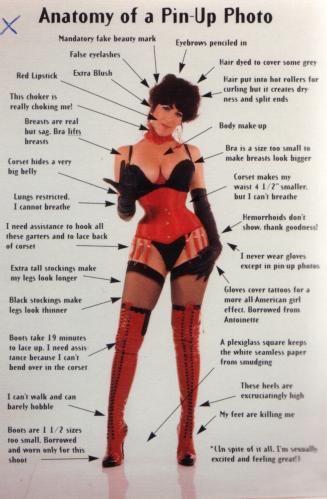 The exhibition "Sex in the City" shows four international artists' confrontation with the theme of female sexuality and urban society:

Elke Krystufek plays with the performative diversity of sexual appearance in her videos: It's a Small World (1999) and Paris is Burning (1995): a logistics of jouissance, guided by the wish-machine of a commercial-erotic surplus.

The Canadian and French artist Nadine Norman confronted the social and economic conditions of sexuality and desire in two major projects that are documented in the exhibition. In Call Girl, a controversial project that took place at the Canadian cultural institute in Paris- and was discussed in parliamentary debate even in the Canadian House of Commons, she made it possible for visitors to book supposed "prostitutesâ€ for a certain amount of time, who were then available for discussion. The maintenance of the structures of a client relationship gave rise to intimate levels of communication that circled issues of availability and the relationships between money, power, and bodies. Also in Je suis disponible â€“ et vous? (I am availableâ€“ and you?, 2002), in a play on classified ads and dating organizations, Nadine Norman combined characteristics of the capitalist working world with private, but publicly negotiated social wishes and sexual desires.

In her video She loves SEX, and she hates SEX (2001), the young Japanese artist TANY slips into the roles of various women who speak about their personal approach to sexuality, which is still taboo today within the male-dominated, rigid norms of Japanese society. From the individual positions, which are in part entirely fictional and in part based on talks and interviews with women, a multi-faceted, fragmented, and contradictory self portrait of the artist develops. In her video Dedicated to my Ex-Lover (2001) TANY beats her ex-boyfriend, the artist Makato Aida. Together, they staged an ironic act of reconciliation for Aida's career and private success since their separation and at the same time a parody-based drama of jealousy and pain.

Parallel to "Sex in the Cityâ€ from 5 â€“ 27 September, showing in project space karlsplatz will be the slide series "Streams by the Wind â€“ Heat Strokeâ€ by the Japanese artist Noritoshi Hirakawa. His work focuses on dealing with social and sexual restrictions.

Accompanying the exhibition will be a catalogue with contributions from Meike Schmidt-Gleim and Andrea Salzmann / Julia Fuchs as well as a detailed interview with the four artists.
German, approx. 64 pages; euro 7,-