"Chagall: Modern Master" showcases the artist as a passionate visionary and pioneer of the avant-garde, on view more than 70 paintings and drawings realized during the pivotal years of 1911-1922. Moyra Davey presents works created using photographs she has taken in Liverpool and Manchester, which refer to narratives both personal and drawn from literature and theory. 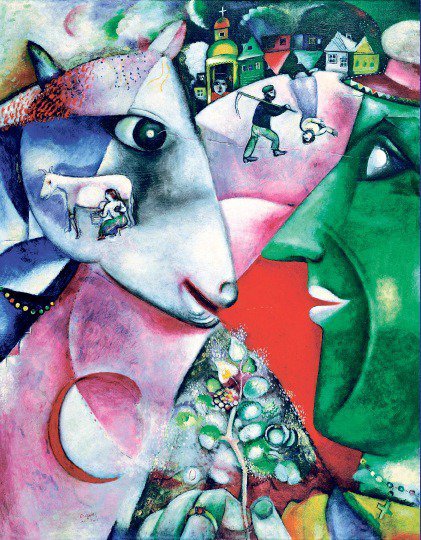 The exhibition at Tate Liverpool is curated by Simonetta Fraquelli, an independent curator, with Gavin Delahunty, Head of Exhibitions and Displays, Tate Liverpool and Stephanie Straine, Assistant Curator.

Marc Chagall (1887–1985) is one of the best known and most loved artists of the last century. Chagall: Modern Master is the first major exhibition of the Russian painter’s work in the UK for over fifteen years and reveals a radically different artist to the one often presented in art history. The exhibition showcases Chagall as a passionate visionary and pioneer of the avant-garde, who combined his own response to the art movements of the day with an open display of affection for his native Russia and Hasidic Jewish heritage. Chagall: Modern Master is a rare opportunity to see a substantial body of work that demonstrates the depth and diversity of Chagall’s art as it matured during the pivotal years of 1911–1922.

The exhibition brings together more than seventy paintings and drawings from major institutions and private collections across the world. The works will be presented in a broadly chronological order, with thematic groupings charting Chagall’s encounters with avant-garde artistic movements, highlighting how he combined these new pictorial languages with his own imaginative and fantastical motifs to create his innovative and expressive works. A major highlight of the exhibition is the rare presentation of the seven large-scale murals designed by Chagall for the State Yiddish Chamber Theatre in Moscow in 1920, on loan from The State Tretyakov Gallery, Moscow.

Chagall: Modern Master begins with Chagall’s emergence as an artist in his native Vitebsk, in present-day Belarus, and his subsequent training in St Petersburg. It goes on to examine the three crucial years spent in Paris (1911–14), where he explored his personal relationship to the emerging avant-garde movements of Cubism and Orphism in paintings such as Half Past Three (The Poet) 1911 and Paris Through the Window 1913. The exhibition brings to light how Chagall responded to the traumas of war and religious persecution following a return to his native Russia at the outbreak of the First World War (key works include Departure for War 1914 and Jew in Red 1915), creating the emotional and often illogical paintings that would go on to form the core of his art for the remainder of his life. The eight years Chagall was forced to spend in Russia before he could return to Paris were marked by a ferocious rate of artistic production and the consolidation of his signature painterly style – demonstrated in the exhibition by major works of the period including Anywhere out of the World 1915 and Promenade 1917–18.

The exhibition will also explore the artist’s lifelong interest in the theatre. His commission to decorate the interior of the State Yiddish Chamber Theatre in Moscow was a creative pinnacle and a startling achievement during the political, social and cultural upheavals of the Bolshevik Revolution, which had an immense impact on his life and work. Decoration and figuration are interwoven within vibrantly coloured and detailed compositions in the seven murals. They will be presented at Tate Liverpool as a custom-designed installation that reconstructs the theatre’s original design: an immersive environment nicknamed ‘Chagall’s Box’. The wall panels Introduction to the Jewish Theatre, Music, Dance, Drama, Literature, Love on the Stage and the epic, eight metre-long The Wedding Feast frieze will all be on display at Tate Liverpool.

Chagall: Modern Master is organised by Kunsthaus Zürich (8 February – 12 May 2013) in collaboration with Tate Liverpool.

Photographer, filmmaker and writer Moyra Davey (born 1958) will unveil a brand new commission for Tate Liverpool this summer. The exhibition brings together works specially created following the artist’s recent visit to Liverpool which will be presented alongside a series of never before seen works. Moyra Davey forms part of the parallel programme for LOOK/13, one of the UK’s leading international photography festivals.

For this exhibition, Davey will present works created using photographs she has taken in Liverpool and Manchester. They refer to narratives both personal and drawn from literature and theory, creating the sense of a fractured voyage or monologue. As is usual in her practice, these works will be individually folded and mailed back to the city: the creases, tape and mailing stamps that mark each photograph will provide a unique physical trace of its journey.

Davey will also present a new version of her celebrated Copperhead series. Created in the context of the global economic crisis this series focuses on the most devalued denomination of US currency, the one-cent coin, and reflects on the psychology of money and the varieties of decay brought about by the passage of time. The Copperhead series consists of one hundred close-up photographs of the profile of Abraham Lincoln engraved onto United States pennies. In an age of spectacle and image gratification, Davey’s unrushed attention proposes a slowing down and a re-evaluation on the all too fleeting beauty of the everyday. Davey will also present objects and artworks that correspond with her archival approach, expanding on her thinking.

Since emerging in the 1990s, Davey has developed an acclaimed body of work, deploying seemingly modest artistic strategies to engage with complex themes. In stark contrast to the spectacle of large-scale digitally enhanced photography, Davey’s practice is closely aligned with a history of photography based on intimacy and accident. Through her seemingly casually-taken photographs of the spines of vinyl records, empty bottles illuminated by light, or piles of books heaped upon a shelf, the artist offers an unrushed consideration of the world drawing our attention to these familiar objects and revealing their quiet beauty and sense of melancholy. Dust also provides a recurring focus in Davey’s work, providing a metaphor for the passage of time and creative possibility: for example the act of taking a book from a shelf and blowing dust from its cover suggests the possible rediscovery and regeneration of its contents.

Moyra Davey graduated from Concordia University, Montreal in 1982 before receiving an MFA from the University of California, San Diego. Her work can be found in major collections including The Guggenheim, New York. She has recently staged solo exhibitions at The Fogg Art Museum Harvard University, Murray Guy, New York and greengrassi in London. In June 2014 Camden Arts Centre in London will present Davey’s first large-scale survey show in the United Kingdom.

Moyra Davey forms part of the parallel programme for LOOK/13, one of the UK’s leading international photography festivals.