Just What Is Not Is Possible

Painting in space. Exhibition of new works focussing on the contradictions between autonomous pictorial presence and the relation of painting to its situation in space. 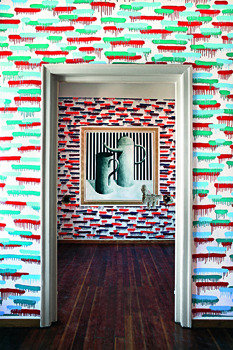 Museum Folkwang presents a major exhibition of new works focussing on the contradictions between autonomous pictorial presence and the relation of painting to its situation in space: Works that go beyond traditional wall painting, break out of the picture frame, mark a transition into architectural space and thus lay the foundations for an experience of painting as space or as an object in space.

"Just what is not is possible" were the words sung by Blixa Bargeld in 1996 in a song by the band Einstürzende Neubauten (Collapsing New Buildings). The attitude and zeitgeist that shaped the 1990s forms the point of departure for a generation of artists aged 30 to 40 today. Their stance is one marked by openness and reflection.

With Franz Ackermann and Johannes Wohnseifer, the exhibition includes two artists who have had a great influence on painting since this time. Franz Ackermann creates expansive murals depicting images captured in photographs and illustrations made during his travels, while Johannes Wohnseifer's painted and layered pictures are interwoven into spatial arrangements with fragments of text and objects.

As a prelude to the exhibition, Niele Toroni is also realizing a new situational piece for Museum Folkwang. During the 1960s, Toroni radically broke out of the boundaries of the panel, reducing his method to a single brush.

Wolfgang Flad's works on the other hand oscillate between medium and object—they encourage visitors to use and interact with them. Cornelia Baltes expands the canvas's limits with interventions into the exhibition setting itself. Then Nicolas Party outplays the rules of the white cube with a minimalistic structure that sees the walls covered in wallpaper.

Using materials such as transparent cellophane and colourful Vaseline, Karla Black creates a series of large-format works. They are released from the surface and remain in limbo between painting and sculpture.

The painterly materiality of Marieta Chirulescu's abstract works is equally difficult to classify, created using several reproduction processes. Simon Dybbroe Møller considers the significance of abstraction in Modernist painting. He creates installations, which can be made of almost anything—curtains, images of delirium or bent neon tubing, to name but a few examples—whereby paint itself does make a reappearance from time to time.

A catalogue in German and English will be published by Folkwang/Steidl to accompany the exhibition Just What Is Not Is Possible – Painting in space.