The exhibition 'Selbstmord. Suicide' presents two extensive groups of works by Valerie Favre. In the exhibition Popism, Dave Allen, Candice Breitz and Douglas Gordon examine the operating system of pop music in order to reflect the contradiction between profit-oriented production and pleasurable consumption in a critical way 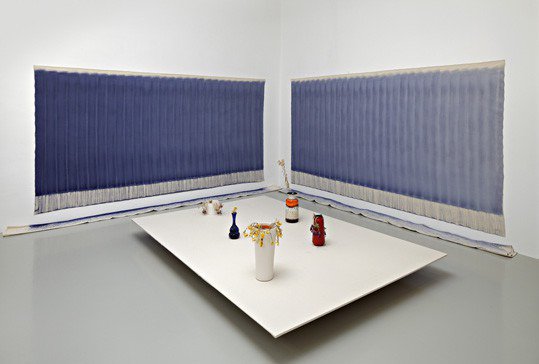 The exhibition Selbstmord. Suicide at Neuer Berliner Kunstverein presents two extensive groups of works by Valérie Favre. On show will be the Suicide cycle (2003-2013), consisting of 129 small format paintings, representing the self-chosen death, partly based on actual facts, partly fiction. The starting point of the works is the very moment of the radical decision to end one’s life, and the self-dramatization of the theatrical moment of death as well as the impact on the bereaved. In the classic 18 x 24 cm format, Favre outlines with reduced color shades different types of suicide. In her pictures, she refers to known suicide scenes from history, art and literature as well as from current newspaper reports.

The second group of works still/leben (de la fragilité des fleurs n°5) (2013), which was created especially for the exhibition, consists of large-format canvases as well as a collection of small format paintings and addresses the creative process of the artist. In preparation for her exhibition at Neuer Berliner Kunstverein, for three months every day, Favre painted a new still life of a flower arrangement in her studio. She illustrates the dimension of time within the project in a diary-like style, with one brush stroke at a time on large format canvases. From the multitude of the small still lifes, one will be selected on every day of the exhibition and presented in the exhibition space.

Publication
To mark the exhibition the publication Selbstmord. Suicide. will be released by Verlag der Buchhandlung Walther König, Cologne, with a foreword by Marius Babias and an essay by Elisabeth Bronfen.

Thursday, July 18, 2013, 7pm
The Power of Death: a question of representation.
Lecture by Elisabeth Bronfen (scholar of cultural studies, Professor of English and American Literature, University of Zurich)
In German language

Candice Breitz / Douglas Gordon, exhibition view Neuer Berliner Kunstverein, 2013, photo: Hans-Georg Gaul
In the exhibition POPISM, Dave Allen, Candice Breitz and Douglas Gordon examine the operating system of pop music in order to reflect the contradiction between profit-oriented production and pleasurable consumption in a critical way. The focus is on the fan as that postmodern figure, which minimizes the alienation within the pop with its active reception. In the installation Dub to Drone (GNR Platinum) (2013) by Dave Allen a custom-made dubplate of the platinum record Use Your Illusion II by Guns N Roses is played during the entire duration of the exhibition. Due to the intense wear the audio coating of the short-life dubplate record is gradually destroyed. The sound is increasingly superimposed by noise until all that remains of the former copy of the platinum record is no more than the raw material. The work Abba Monument, Berlin, June 2007 by Candice Breitz is one part of the five-part series Monuments. In these monumental group portraits Breitz explores the phenomenon of self-representation and imitation within the fan culture. These sensual enactments are located between precise imitation and individual interpretation. Douglas Gordon is represented with the installation Douglas Gordon Sings The Best of Lou Reed & The Velvet Underground (1993), consisting of a video monitor and a carpet. The video shows Gordon lying on the carpet, presenting himself here as a fan, who emulates his idol in active reception.

Candice Breitz (b. 1972 in Johannesburg, living in Berlin), in her videos, photographs and installations, deals with stereotypes and visual conventions of pop and film culture and the relationship between the fan and the idol. Exhibitions include: Standard Bank Gallery, Johannesburg (2012); Kunsthaus Bregenz (2010); White Cube, London (2010); Espoo Museum of Modern Art (2010); The Power Plant, Toronto (2009); San Francisco Museum of Modern Art (2009); Louisiana Museum of Modern Art, Humblebaek (2009); Mudam Luxembourg (2008); Temporäre Kunsthalle, Berlin (2008) and others.

Douglas Gordon (b. 1966 in Glasgow, living in Glasgow, Berlin and New York), in his films, photographs, videos and installations intensely explores the perception of images in our everyday culture. Douglas Gordon was represented in 1997 with the Young Bristish artists in the British Pavilion at the 47th Venice Biennale. In 1996 he received the Turner Prize and the 1998 the Hugo Boss Prize. Exhibitions include: Gagosian Gallery, New York (2012); Museum of Modern Art, Frankfurt/Main (2011); Auditorium Arte, Rome (2011); Tate Britain, London (2010); Van Abbemuseum, Eindhoven (2009).