"It is almost too beautiful here"...on Lake Thun. The exhibition focuses on the 8-month long residence of the young German Expressionist at Lake Thun. Radiant colours and their resolution in the painting were assembled into painted collages. 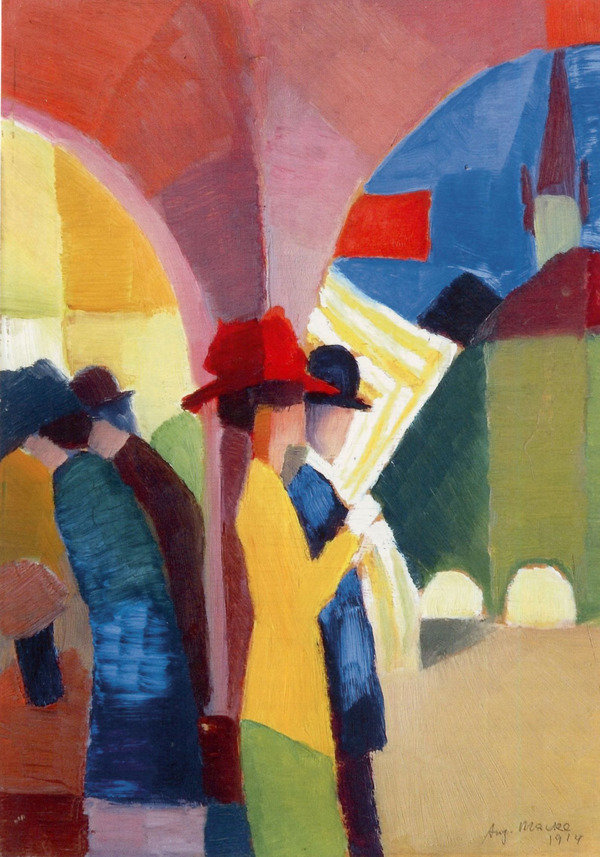 The work of the German expressionist August Macke ranks among the outstanding achievements of the early modern period in 20th century art. The artist was cosmopolitan and educated, and though he undertook many journeys, Switzerland had a very special significance in his work. Over the entire period of his artistic activity from 1902/03 to 1914 – the emergence of the first sketch book until his untimely death at the beginning of World War I – Macke’s repeated trips to Switzerland were a constant. The flying visits to Swiss museums in particular offered confirmation, motivation and inspiration during the different phases of his artistic work.

The exhibition at the Kunstmuseum Thun focuses on the 8-month long residence of the young German Expressionist in the Haus Rosengarten in Oberhofen at Lake Thun from the beginning of October 1913 to the end of May 1914. Shortly before the outbreak of World War I, in which the artist was killed in action after a few weeks, Macke developed his very own style of painting here. The intense creative period on Lake Thun was an artistic turning point. He managed to merge colour, form and expression values into a unique artistic synthesis. It was not the actual topography of the picturesque landscape that found its way into Macke’s world of images, but only individual fragments thereof. Macke’s artistic compositional techniques, which give his stay an extraordinary importance, had changed fundamentally. He now combined topics and individual forms found long before – such as couples or passersby in nature or urban areas shaped by humans – to new compositions. Radiant colours and their resolution in the painting were assembled into painted collages. In an almost serial approach, different variations (of a subject) revolve repeatedly around the same content in the various techniques. In Thun, August Macke developed images that are not a mere reflection, but distinct image compositions and create new pictorial realities. These are fiction, created from experience and a response to the alienation of his time: visions of a harmonious coexistence in society and of private, domestic happiness; a “song of the beauty of things,” as he himself put it in 1913.

A distinctively close relationship with Switzerland also ensued through the friendship with Swiss fellow artist Louis Moilliet. At Lake Thun, a close artistic exchange between the two friends developed which gave a new impetus to Moilliet’s work, as also can be seen in the exhibition in Kunstmuseum Thun. Moilliet was inspired by Macke to begin a new, intense creative period. The friendship was not only based on their connection as artists, but also on a shared sense of humour. In Elisabeth’s memoirs, there are many stories about boisterous get-togethers and jointly committed pranks.

Another digression was the joint trip to Tunis by August Macke, Paul Klee and Louis Moilliet in April 1914. The journey was jointly planned by the artists in January that year at Lake Thun and undertaken a few months later. It represents a brief interruption of Macke’s stay in Oberhofen to experience the southern light and oriental motifs in North Africa. For Macke, the trip signified a confirmation of formal redefinitions, which he had pondered during the previous month on Lake Thun.

How many other artists besides Macke were fascinated time and again by the landscape at Lake Thun is illustrated in another digression. That Lake Thun became a topic of art is revealed not only by the paintings by Macke and Moilliet, but also by the works of contemporary artists as well as recent paintings. Works by Cuno Amiet, Ferdinand Hodler, Johannes Itten, Paul Klee, Alfred Heinrich Pellegrini and others place August Macke’s art in a comprehensive historical context of landscape painting on Lake Thun.

The exhibition conceptualised by Dr. Ina Ewers-Schultz and co-curated by Helen Hirsch documents for the first time August Macke’s special relationship to Switzerland. Around 90 works by the artist, quotations from his letters and the memoirs of Elisabeth Macke, and partly from unpublished letters, illustrate the importance of the various stops and stays of the German expressionist in Switzerland. Historic photographs accompany the pictures and quotes.

A multifaceted programme of events invites you to get involved extensively in the exhibition. For our young visitors to explore the imageries, we have prepared a 'Sehkiste' entirely focused on August Macke.

A comprehensive catalogue with contributions by renowned experts accompanies the exhibition. Publisher: Verlag Hatje & Cantz; about 192 pages; over 100 images

Lecture: Colours in August Macke
Wednesday, 19 June, 18.15 hrs
By Dr. Marianne Keller Tschirren, art historian. An intensive involvement with colour was the order of the day for the avant-garde artists of the early 20th century. August Macke also dealt extensively with it and related colours to music. How he artistically transposed such ideas, which was a contrasting approach to Paul Klee’s, is the subject of this lecture.
Cost: CHF 18 / 16. For members of the supporting association: CHF 14.

Reading and concert by Jasmine Jäggi and Alexandre Dubach
Sunday, 16 June, 11.15 – 12.15 hrs
Sunday, 25 August, 11.15 – 12.15 hrs
Actress Jasmine Jäggi reads out from the notes of Elisabeth Erdmann-Macke and brings those times closer to us from the perspective of Macke’s wife. The reading is enriched by sonatas of Johann Sebastian Bach, performed by Thun-based violinist Alexandre Dubach.
Cost: CHF 18 / 16 / For members of the supporting association: CHF 14.

Picnics with August Macke
To accompany you at the exhibition, you can borrow a picnic basket containing detailed material concerning August Macke and museum tickets, besides fresh local produce. Family version available. Ideal as a gift! For information and cost, go to www.kunstmuseumthun.ch

Workshops for children
Pictures that shine like jewels: Painting with self-made colours
Saturday, 22 June with Franziska Keusen, art educator
Balance: experiments concerning circus images and tightrope walkers
Saturday, 24 August with Prisca Beuchat, art and dance educator
For children from 5 to 8 years, 10 – 12 hrs. For children from 9 to 12 years, 14 – 16 hrs.
With registration. Cost: CHF 10 / Pass for 5 workshops: CHF 45.
Between the workshops, we offer pasta lunch from 12 to 14 hrs for adults and children, with registration, cost: CHF 5 per person.