Parallel to the first institutional solo exhibition by Marcel Dzama in Switzerland, the young Swiss artist positions Augustin Rebetez and the collective U5 are represented with smaller solo shows. The illustrations by Albrecht Durer of the medieval verse poem Das Narrenschiff by Sebastian Brant extend the exhibitions as an art historical insert. 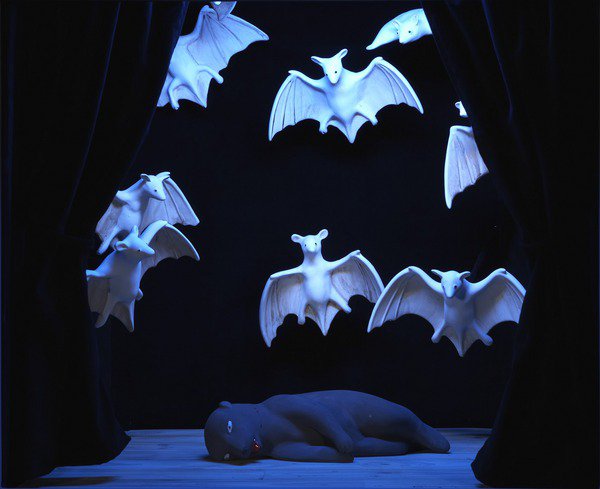 Parallel to the first institutional solo exhibition Hollow Laughter by the renowned Canadian artist Marcel Dzama in Switzerland, the young Swiss artist positions Augustin Rebetez and the collective U5 are represented with smaller solo shows – when your dreams trickle down your umbrella, the weather is nice and Parasite. The illustrations by Albrecht Dürer of the medieval verse poem Das Narrenschiff (Ship of Fools) (1494) by Sebastian Brant extend the exhibitions as an art historical insert. The artists represented at the exhibitions deal in depth with today‘s world images and genre pictures and draw mostly from the mundane and banal. In this way they increase awareness of the excesses of society. Their sometimes seemingly archaic works often bear witness to the vulnerability and the discomfort that hide behind the fragile interpersonal situations, and translate them into impressive realms of experience.

Marcel Dzama’s work includes drawings, collages, dioramas, painting, sculptures and videos and confronts the viewer with different axes of time and image. At first glance, the imageries of Dzama seem harmless, almost innocent. But behind this facade a grotesque and sometimes cruel universe opens up: masked, uniformed and armed, dancing, loving, or agonising characters are the protagonists of his imagery. Numerous characters are part of his recurring ensemble, like ballerinas, masked and naked women and men, dressed up figures in catsuits with black and white dots, clowns, torturers, soldiers and hybrid creatures with horse and bull heads.
The human chasms run like a red thread through Dzama’s work. In the role of the contemporary chronicler, Dzama explores the world and its performers and dissects them mercilessly. The selection of works shown in Thun is an exemplary journey through Dzamas worlds and includes works that were rarely shown so far.

Augustin Rebetez – when your dreams trickle down your umbrella, the weather is nice (b. 1986 in Delémont, lives and works in Mervelier and Geneva)

Augustin Rebetez from Western Switzerland creates a universe of drawings, sculptures, photos, videos, installations and texts. The mystery of the night and the boundaries between reality and fiction are frequent themes in Rebetez’s work. His work transcends the boundaries of conventional artistic disciplines, thus creating a unique language. His vocabulary expresses it through several motifs: the brain as a metaphor for the maze of thought, the sky and the mystery of the universe, the house, and the heart, seat of all emotions. The result is a fragile yet powerful, often harrowing magic, thus forming a random yet surprisingly balanced set that conveys disconcerting poetry.
With anarchical installations and humour that is at times offbeat, Rebetez constructs a critical artistic discourse on contemporary society falling to pieces in the twists and turns of power and money. The latest series of drawings and recently produced moving sculptures can be seen in Thun. In addition Rebetez’s painting has taken the centre stage, which is currently his preferred work mode. Together with a fellow artist, he builds an installation on site, in which he integrates existing works.

U5 – Parasite
(Artist collective of four persons, CH / D /A, live and work in Zurich)

The U5, the four-member artist collective founded in Zurich in 2007, combines photography, painting, sculpture, live performance, video and image projections to complement each other and thus creates fantastic universes in collective installations. Everyday, brightly coloured materials such as ironing beads, clothes lines, adhesive tapes, cable ties, food packaging, golf balls, feathers, cotton swabs, Plexiglas or animal bones are held together in it by oodles of hot glue or are coated with several layers of lacquer. Out of it arise, in unconventional use and at the expense of a large amount of time, obelisks, plant imitations, vases, masks or city models. The aesthetics is frequently reminiscent of Art Brut or original art.
In content, the luxuriant works move between nature and artifice, as well as utopia and myth. It is the “maximalism”, in the sense of maximum complexity, which the collective attributes to its artistic work. The different layers of U5 and its works intertwine in the spirit of a distinct organism. The collective responds to the spaces in Kunstmuseum Thun and creates a site-specific total installation from existing works and new productions, where as a visitor one can plunge oneself in both the exterior and the interior of the U5 universe.
The objects maintain their own transience, in which the U5 permanently changes its oeuvre and revises the works often. The collective does not want to commit to a particular form, since the change is an essential component. The U5 cosmos as a whole raises questions about artistic creativity, about individual and collective creative processes and thus also about artistic authorship.

The illustrations by Albrecht Dürer of the medieval verse poem Das Narrenschiff (ShipofFools) (1494) by Sebastian Brant extend the exhibitions as an arthistorical insert and reinforce also the awareness of the excesses of society. The book Das Narrenschiff by Sebastian Brant printed in 1494 is used as a common denominator for the various positions, which is meant to let the different positions enter into a dialogue. The book is a satirical and typological poem in verses that tells of a ship full of people who are in search of a paradise for fools and have to die because of their wrong behaviour. Each figure represents a vice like gluttony, adultery and blasphemy. The Ship of Fools particularly indicts the stupidity, malice and wickedness of the representatives of medieval classes and professions. The author appeals to the mind and to reason, but not to the piety of his contemporaries. The turn of a new era is reflected in Brant’s stories just like, for example, in Dante Alighieri’s Divine Comedy. People no longer follow the church obediently and without protest.
Answers to questions that cannot be found in the bible are sought. Thus this book that became a bestseller in the 16th century, paved the way for enlightenment and inspiration in the population. The topics of the Ship of Fools continue to resonate to this day and provide a connection to the contemporary artists shown in the three exhibitions.

Kunstschmaus
Sunday, 15 June, 11.15 a.m., with Barbara Berger, Scientific Collaborator
Wednesday, 13August, 12.15 a.m., with Barbara Berger, Scientific Collaborator
Appetite for art? For those who want to satiate not only their hunger, but also their interest in art, we offer two short guided tours through the exhibition with a joint meal later at Café Thunerhof.
With registration until 12 June /11 August at: Tel.: +41 (0)33 225 84 20 / kunstmuseum@thun.ch

Das Narrenschiff
Wednesday, 4 June, 6.15 p.m.
Dr. Anita Haldemann is a curator for the copper engravings collection at the Kunstmuseum Basel and will speak on the topicality of the verse poem the Ship of Fools by Sebastian Brant before the woodcuts of Albrecht Dürer.
The event will be conducted in the German language.