In Origenes, Vasquez de la Horra pursues her thinking on a series of drawings begun in 1997 evoking the way the body taking shape in the mother's womb is a parallel with the creative act. The Nothing is Our Story is the title of a new series of paintings and drawings by Martin. 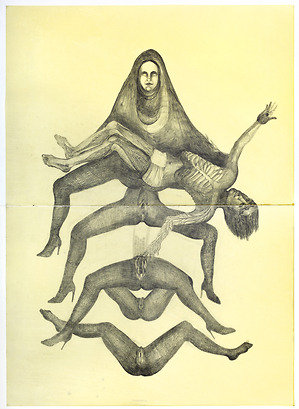 Galerie Thaddaeus Ropac is delighted to announce the third exhibition of work by Chilean artist Sandra Vásquez de la Horra, who lives and works in Berlin.

In this exhibition, Origenes, Sandra Vásquez pursues her thinking on a series of drawings begun in 1997 evoking the way the body taking shape in the mother's womb is a parallel with the creative act of the artist engaged in drawing.

A notable development in her thinking here is expressed through the recurrent presence of elements from the vegetable kingdom that enrich the notion of the life cycle. It forges a link with an earlier series called 'The Botany of Evolution'. In this dialectic of life and art, a grain of cereal corresponds to the soul in the same way that the work of art begins gestation in the very first stroke of the pencil. The unknown factor is the form that either life or the completed work of art will take. In this respect, Sandra Vásquez's previous works left a great deal of scope for development, for coming back to line and pattern, so that the very process of the creative act could be expressed as an accomplished, autonomous form. Although myths, popular culture, motherhood, and spirituality are still the basic elements of Sandra Vásquez's vocabulary, this new series of works seems to express a new maturity in the treatment of these themes.

Sandra Vásquez returns to the genesis of the creative act, comparing it to the formation and development of the spirit. The drawing entitled Origenes (2013) appears to be a religious piéta but the reference is in fact to the birth of man as energy and creative force. The god the woman has given birth to is the god of creation and ultimate submission of body to soul. He is both birth and death incarnate. The skeleton of the man with his veins showing is a visual metaphor for the flow of sap through the branches and leaves of a tree. Birth and death in the vegetable kingdom place the experience of the body and the cyclical renewal of life in perspective, making death not absence of life but an essential stage of it. The drawing, La Virgen del Amazonas (2013), of the breast-feeding mother is, in this respect, as poetic as it is explicit; the woman's body is a screen bearing the image of rich and generous flora, like the breast that feeds the newborn child.

The expression of life in the form of cycles is a recurrent aspect of this new series. Las Flores del Mal (2013) is a drawing that expresses this vegetable and human parallel as an obvious fact, while at the same time having recourse to irony and elegance combined with a visual and literary richness typical of Sandra Vásquez's work. 'The Metamorphoses of the Vampire' is one of the poems in Baudelaire's Fleurs du Mal. It confronts the sexual act, seeing it as a sensual finality in which one of the protagonists – the woman – is revealed as a vampire in a certain state of decomposition; a manifestation of death in the midst of the sexual act, which itself is a celebration of existence.

Sandra Vásquez de la Horra, was born in 1967 in Viña del Mar, Chile. She lives and works in Berlin. After graduating from the School of Graphic Arts at the University of Viña del Mar in 1994, she went on to study at the Düsseldorf Kunstakademie. In 2003 she obtained a Master's degree at the Cologne Kunsthochschule für Medien. Drawings by Sandra Vásquez de la Horra have recently been exhibited at the Sao Paolo Biennale, at various solo shows, the Musée d'Art Moderne in Saint-Etienne, the Oldenburger Kunstverein, the Museum Morsbroich, Busan Museum of Art in Korea, the Maison Rouge in Paris, and the Pompidou Centre, which acquired works by her after she was awarded the Daniel & Florence Guerlain Foundation prize for drawing in 2009. Her works feature in museum collections in Germany, Switzerland and France, and in many private collections and foundations, particularly those devoted to drawing.

Bernhard Martin
The Nothing is Our Story

Galerie Thaddaeus Ropac Paris presents a solo exhibition by German artist Bernhard Martin. The Nothing is Our Story is the title of a new series of paintings and drawings from Martin's continuing series Diktatur der Hormone [dictatorship of the hormones], started three years ago. It was originally planned as paraphrases on the iconography of the Last Supper, but in the course of the working process, these became table scenes which got out of hand, and when strung together they are like a film sequence. The drawings in the gallery, which are dedicated to the writer Michel Houellebecq, were inspired by the artist's thoughts on the novels Plateforme and La Possibilité d'une île.

The pictures are table scenes of a modern consumerist society, showing what is happening both on the table and under it. Martin describes the society he portrays as "sickened by its own rules, unable to find satisfactory answers to questions of power, love, jealousy and longing, and choosing as a last resort cynicism and self-indulgence." Bernhard Martin is not judgemental, nor does he think in hierarchies. He is interested in the absurd, the crazy, abnormal, abstracted, nonsensical, the paradoxical and senseless. The expression "absurdism" culminates in one of the pictures, which shows a food fight (Innerhalb des Absurden gibt es keine Hierarchie [Within the absurd there is no hierarchy]). In these works Martin also poses the question of "whether the last free thought might not be in the absurd. I'd rather paint a kick in the arse than some dreary old pop star." Martin's sources of inspiration range from Otto Dix’s famous triptych Großstadt (1927/28) to the strident and ruthless elements in Quentin Tarantino's films.

In past years, Bernhard Martin was known for his radical sampling and for his combination of the most diverse styles of painting, which he mostly blended to form exuberant picture narratives. Now he uses an innovative method of lightly applying pastel shades on to the raw canvas, lending the pictures a magical atmosphere. At first glance, Martin's works seem beautiful, but on closer inspection the subversive hotbed of his encoded pictorial worlds becomes perceptible. The paint is applied so delicately that the pictures seem strangely otherworldly. Martin's new technique here shows his profound need for change. "I'm not interested in doing the same thing all my life when everything around me is constantly changing," he says. "Surely it's more in keeping with the age to develop a language to withstand this, and to try to link and combine everything."

The large-scale drawings in the gallery represent enclosed landscapes, resorts and leisure parks. The creatures depicted (based on the Seven Deadly Sins) in these landscapes – which are always at the same time puzzle pictures – can amuse themselves to their heart's content and assume different roles. Here one can love, believe, eat, kill, torture, and shed all problems, responsibility and social constraint, as in a dream.

Bernhard Martin chronicles everyday life; his deliberate recourse to the most infantile objects is typical. He calls his programme "the idea of randomness, without being random." "I paint the way others speak," he sums up. "I'm interested in worlds, islands, rarities, biotopes, contrasts that clash – in short, everyday life" – thus Martin describes the intention of his works, which form a fascinating sub-system of real appearances. "Many pictures are like vortices that suck in the gaze," Daniel Völzke once remarked in Zeit Magazine (19/2008).

Bernhard Martin was born in Hanover in 1966, and studied at the Academy of Fine Arts in Kassel (1983-89) – probably one of the youngest students ever to have been accepted into a German academy of art. He spent the ensuing years in Frankfurt am Main and Barcelona, and currently lives in London and Berlin. He became known to a wide public particularly through the very favourably received group exhibition of New German Painting held in the Frankfurt Kunstverein in 2003, and his work is now represented in important collections including the Museum of Contemporary Art in Geneva, the Rubell Collection in Florida, MoMA in New York, the Sander Collection in Berlin, the Deutsche Bank in Frankfurt, the Thyssen-Bornemisza Art Contemporary in Vienna, and the Museum of Modern Art in Salzburg. In 2005 comprehensive solo exhibitions of his work were held in the Villa Arson in Nice and the Arario Museum in Seoul. In autumn 2008 he received the Art Prize of the City of Wolfsburg, marked by a major solo exhibition in the Städtische Galerie Wolfsburg. Bernhard Martin has participated in important group exhibitions in France; his works have been shown in the Kunsthalle de Mulhouse, Musée d’Art Contemporain de Val-de-Marne in Vitry-sur-Seine (both 2010), Ancienne Douane de Strasbourg (2011) and Carré Saint-Anne Espace d’Art Contemporain in Montpellier (2013).