Experiments in Art and Music in Eastern Europe 1957-1984. The first experimental approaches to sound and image, featuring artworks and recordings by Fluxus artist Milan Knizak, plus works by Sots-Artists Komar & Melamid, Hungarian artist Dora Maurer and composer Zoltan Jeney. More than 30 works will be on display. 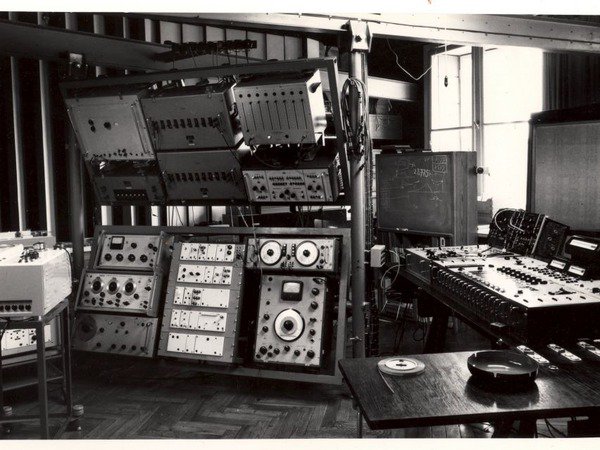 Sounding The Body Electric: Experiments in Art and Music in Eastern Europe 1957–1984 is an exhibition on the first experimental approaches to sound and image in Eastern Europe during the 60s and the decades that followed, featuring artworks and recordings by Fluxus artist Milan Knižák, plus works by Sots-Artists Komar & Melamid, Hungarian artist Dóra Maurer and composer Zoltán Jeney.

In the aftermath of Stalinism, composers and artists in Eastern Europe were given new opportunities to experiment. New recording studios equipped with magnetic tape recorders and, later, synthesisers were established, first inWarsaw in 1957 and then throughout Eastern Europe. New and often challenging forms of music were produced in these laboratories of sound.

The connections between the visual arts and experimental music were closer in the 1960s than perhaps any time before or since. Sound and image combined in artists’ films, ‘happenings’ and sounding installations. Experimental forms of notation were also created to stimulate uninhibited musical expression.

The early happenings and actions of the 1960s were associated with intellectual freedom and reform. The exhilaration of experimentation declined during the decade and in the 1970s new critical forms of art emerged which associated sound with surveillance and censorship.

This exhibition explores both the optimism and the anxiety that was to be found in the experimental zone of art and music.

A double-CD of recordings of works in the show will be issued by Bólt Records.

Sounding The Body Electric: Experiments in Art and Music in Eastern Europe 1957–1984 was first shown at the Muzeum Sztuki in Lodz from June – August 2012.

In cooperation with Muzeum Sztuki

Thu 11 July, 2013 Door Times : 8pm
THE WIRE SALON: In the Experimental Zone: Art and Music in Eastern Europe in the 1960s and 70s
David Crowley, one of the curators of Sounding The Body Electric: Experiments In Art And Music In Eastern Europe 1957-1984, will explore the politics of experimentation in Eastern Europe during the 1960s and 1970s. The talk will focus on the sound works of Krzysztof Wodiczko, Milan Knížák, Zygmunt Krauze, Dóra Maurer, Zoltán Jeney, the Bosch + Bosch Group and others, and will be illustrated with audio and film clips.
This event is organized in collaboration with The Wire magazine and will take place at Cafe OTO