The expansion of the arts. The exhibition looks at the origins of the change, the experimental activity and the earliest collective actions that pointed to the beginning of an unprecedented expansion of the notion of 'composition' and soon generated a multidisciplinary project that took place in real time/simultaneously over the course of that year. 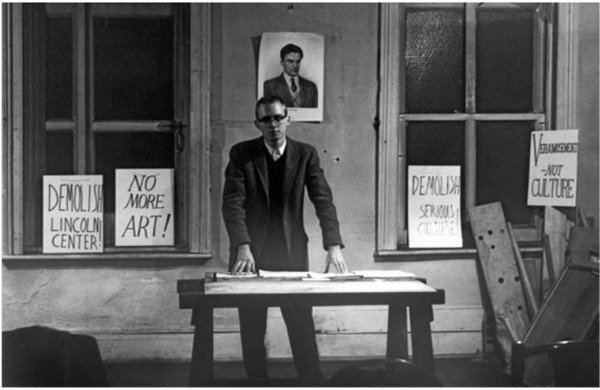 The 1960s may be the 20th century decade that wrote the code for our contemporary moment. Introducing text/information-based strategies, real-time, and the rupture of specific media boundaries into artistic practice, it defined creative criteria, models of authorship mediation, and new distribution networks that are still very much with us. The exhibition ± I96I posits a deliberately unfamiliar and anonymous temporal marker to spark debate about how and when the first new theoretical and artistic ground was broken, positing the point at which the “expanded arts” of the Sixties could first be glimpsed. Choosing a field of radical invention before the leading names and terms of the decade were critically and historically defined – considering precursors such as Anna Halprin and John Cage, and breakthrough 1961 work by figures such as La Monte Young, Robert Morris, George Brecht, Henry Flynt, Simone Forti, Jackson Mac Low, Walter De Maria, George Maciunas, Ray Johnson, Emmett Williams, Nam June Paik, Yoko Ono, et al -- the exhibition traces the initial crystallization of certain key ideas. At the center of this is the musical score, subjected to unprecedented experimentation, which became the ur-model for all the arts, rupturing disciplinary and medium specificity, revealing a newly activated creative field that extends from the postmodern to now.

The period surrounding 1961 revealed a new contingency arising between the artist/ composer/ poet/ dancer/ choreographer and their media. As an emphasis on time and concept began to generate shared terms, medium was selected not for innate reasons but simply to serve the task at hand. In this charged moment, John Cage’s impact looms large, along with other precursor figures such as choreographer Anna Halprin, and their initiatives subtend the historical matrix of the exhibition. But it is the new generation with which the show is principally concerned. Galvanizing figures, in their different ways, La Monte Young, Jackson Mac Low, and eventually George Maciunas (who founded Fluxus the following year based on his “1961 experience”), will be presented in relation to a spectrum of emerging projects.

The contentious interaction between generations registers in the relationship between the landmark 1961 publication of Cage’s writings, Silence, and Young’s An Anthology initiated that same year, which would rewrite the playbook for all that could be conceived as “experimental composition.” Ostensibly grounded in music, incorporating the models of Cage’s circle, An Anthology was dominated by the interdisciplinary work of the new guard: 27 composers, poets, artists, and choreographers all presenting their ideas, for the first time comparably, in textual form.

Rejecting the model of dominant “authors” historically favored in this period, ± I96I seeks to give agency to each gesture, to allow individual artists to be considered in their own right – with a frame lighter than any that a single name or category of artistic practice would posit. Like an open score this offers the chance for an interpretation that is different in each moment of encounter. Framed by time, ± I96I draws upon the ephemeral and the contingent – from sound recordings, to live dance, to printed scores awaiting realization – it generates a mosaic of the “first” expanded field that launched the 1960s. The new artistic formats of 1961, its international networks, its fervent commitment to typographical design and layouts that support and even articulate the work, have lost clarity in the present even as they begin to seem more relevant than ever. The exhibition ± I96I seeks to elucidate a singular field of experimental activity, around that year, as perhaps one of the last convincingly utopian moments of collaboration and uncompromisingly radical invention in the 20th century, for all the revelations in can still bring to the 21st.