Personal and other obstacles. Two photographic works documenting street actions from the early '70s, a series of collages with a poster advertising a group exhibition with one of Trbuljak's early street actions, and a series of black/white, 'white' and full-color monographs. 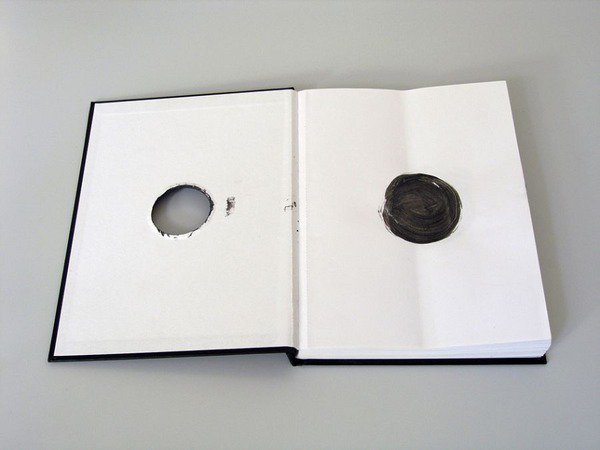 Galerija Gregor Podnar is pleased to announce Personal and other Obstacles, Goran Trbuljak’s first solo exhibition at its Project space in Ljubljana. The show presents a selection of photographic works, artist’s books, and print-collages, created between 1970 and 2013.

The exhibition is comprised of two photographic works documenting street actions from the early '70s, a series of collages with a poster advertising a group exhibition with one of Trbuljak's early street actions, and a series of black/white, "white" and full-color monographs. Trbuljak's anonymous street actions show the relation of an art work inside and outside art institutions such as galleries and museums, stressing the question of his own position as a young, unknown artist within the art system as well. His recent "Monographs" express the wish to represent an artist's career, in this case his own, by producing hundreds of pocket format monographs made with various kinds of paper while transforming the monographs themselves into works of art. The hand-made production of these monographs not only short-cuts normal, art-historical procedures, by taking the act of historicizing into one's own hands, but also questions the position of the artist vis-à-vis his own oeuvre.

As pioneer of conceptual art in the former Yugoslavia, Goran Trbuljak began his career in Zagreb in the late 1960s with works that critiqued the institutions of art and questioned the nature of the artwork. Consequently, his art took particular forms: calling cards left for gallery staff, opinion polls that demanded a response, and even a “referendum” of passers-by in Zagreb in 1972 on the question, “Is Goran Trbuljak an artist or not? 1. Yes 2. No.” In the mid-1970s, Trbuljak entered into a dialogue with painting: The Sunday Painting (1974), for instance, is in fact a photographic documentation of one of the artist’s street actions: on several different Sundays, Trbuljak went to an art-supply store and painted on the display window in correlation with the blank canvas and easel behind the glass. And each Monday, the store’s staff would remove the paint from the window. The Zagreb-based art critic and curator Branka Stipančić writes of Trbuljak: “He was the first artist in Croatia to question the meaning of exhibiting work within the gallery system, and the status of an artist as part of this, integrating such questions into his art. Every new step in art was always an ethical issue for Trbuljak. His influence on the generation of post-conceptual artists in the mid 1970s was decisive.”

Goran Trbuljak’s work has been shown at the Venice Biennial in 1995, as well as, amongst others, in the following exhibitions: "Kurze Karrieren", at the Museum Moderner Kunst in Vienna (2004); "...Und so hat Konzept noch nie Pferd bedeutet", at the Generali Foundation in Vienna (2006); "Making of Art", at Schirn Kunsthalle in Frankfurt am Main (2009), "The Death of the Audience", at the Secession, Vienna; and "The Promises of the Past: A Discontinuous History of Art in Eastern Europe", at the Centre George Pompidou in Paris (2010).

The project is supported by Ministry of Culture of the Republic of Slovenia, Cultural Department of the City of Ljubljana. Special thanks to Moderna galerija Ljubljana.