Three Volumes, the site-conditioned installation Irwin developed for the main space of the Secession, foresees 3 cubes covered with scrim that emphasize and rhythmize the volume of the space on the basis of the architecture. Locher's exhibition Homo Oeconomicus continues his examination of the relationship between language and economics. The Side Room by Biscotti is the result of several months spent investigating the processual element of dreams. 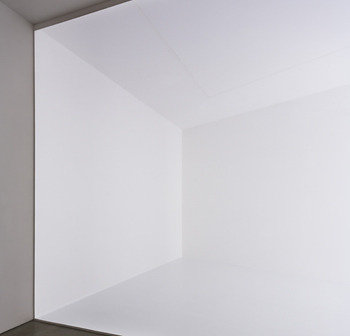 For over 40 years now, seeing, or more specifically, perception, has been the foundation of Robert Irwin's artistic practice. At the start of his career in the late 1950s he still painted in an abstract expressionist style, in 1970 he abandoned his studio and the idea of art as a structured object. His artistic work has since then been shaped by an unending engagement with human perception. Irwin's interest is focused on light and space and their mutual interaction: he is one of the pioneers of the Californian "light and space movement." The context of the environment in which an artistic work is presented and beheld, plays a defining role for the conception of his installations. Irwin coined for this the concept "site-conditioned" or "conditional art." Since 1975, the artist has realized over 50 projects that react to the existing qualities of a site or spatial context, including prominent projects such as the designs for Dia:Beacon in the Hudson Valley or the luscious garden of Getty Center in Los Angeles.

Three Volumes, the site-conditioned installation Robert Irwin developed for the main space of the Secession, foresees three cubes covered with scrim that emphasize and rhythmize the volume of the space on the basis of the architecture.

Artist talk: Thursday, July 4, 6pm, with Robert Irwin and Jennifer Winkworth, organized by the Friends of the Secession

A pioneer of neo-conceptual art since the late 1980s, the German artist Thomas Locher examines the rules of language and the complex ways in which it functions. His exhibition Homo Oeconomicus, specially conceived for the Secession, continues his examination of the relationship between language and economics as well as the subject acting within this system, themes he has focused on for some years now. In a series of images and films, most of them new, he treats aspects of exchange, structures of credit, belief, and credibility, and the impact of these notions on the constitution of the subject.

He analyses the cycles of give and take, profit and loss, or care and neediness, coupling image citations such as Giotto's Kiss of Judas or Hieronymus Bosch's The Conjuror with texts referring to the work of Karl Marx or quoting from Jacques Derrida's Donner le temps 1. La fausse monnaie (Given Time I: Counterfeit Money), which addresses the im/possibility of a gift. In two other, digital text works he uses the construct of cinematic opening or closing "credits" in order to address the English term "credit" and the future-oriented logic of giving credit.

Thomas Locher's text-image constructions are conceived as an open interaction involving multiple levels of meaning, which between thesis and antithesis reveal a large number of other perspectives and factors that are normally excluded. In Homo Oeconomicus Locher uses the contradictory phenomenon of the gift in order to once again render visible the formal and informal forces that bind our society together.

Thomas Locher, born in Munderkingen, Germany in 1956, lives and works in Berlin.

Rossella Biscotti
The Side Room

Rossella Biscotti's installations are generally highly complex and comprise sculptures, performances, documents, and audio works. Based on archival research and personal conversations with people involved in events, they are concerned with memory and the limits to objective accounts of history. Many of her works address the recent political history of Italy, one example being the continuing multimedia installation Il processo (The Trial), which she began in 2010. This work takes as its theme the political climate in Italy in the early 1980s, when the government cracked down on left-wing movements.

The project for her first solo exhibition in Austria was conceived in parallel with her work for the 55th Venice Biennale. This new audiovisual installation for the Secession is the result of several months spent investigating the processual element of dreams.

Rossella Biscotti, born in Molfetta, Itally in 1978, lives and works in Amsterdam.

Press
For interview requests and any other questions please contact tamara.schwarzmayr@secession.at.
Please find the press releases and images for download here from July 4: www.secession.at/press