thu-sat 11am-6pm or by appointment

Gaan omver. The exhibition brings together works by Hajonides and Zwerver focused on the theme of construction and decostruction of the image and communication between parts and objects. 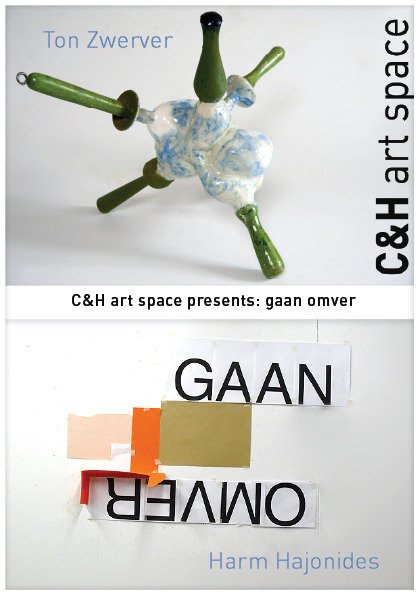 C&H art space is proud to announce 'gaan omver', two men show. The exhibition brings together works by Harm Hajonides and Ton Zwerver focused on the theme of construction and decostruction of the image and communication between parts and objects. Harm Hajonides creates installations and drawings using simple elements and words. His drawings are made up by the assemblage between elements, made of colored paper with fabric, plastic or wooden bar and dutch words.

The single element is affixed through tape directly to the wall, leaving the process and the structure of the work entirely visible. All works of Hajonides, made by the union of words and elements, try to achieve an exchange between language and image. The words accompany each picture elements becoming part of the image but they are not fused with them, in the way to remain two independent entities that engage in dialogue with each other. They do not describe the picture but give it the social context: the image is not an illustration of the word but allow it to have a physical space to express.

Ton Zwerver shows his last series of sculptures, created with daily use materials. The starting point of the creation of these sculptures is formed by the idea to build objects using shaped materials randomly found like wooden rods, plastic bottles, brightly-coloured tape. By using elements from his immediate surroundings he is capable to create, sometimes by planning, sometimes by accident, an individual or a group of objects that evolve as a sculpture, assembled with extreme precision. These sculptures/objects are different entities that vary in both form and concept: placed together in the space, they form a group of figures that communicate and interact with one other.

The idea to work in this way comes from working on his previous project "Everyday Sculptures', creation of a sculpture everyday. After completing the construction work, Zwerver documented the sculptures in a photograph: his next step was to destroy them and to reuse the materials to build something new again. On his 'Everyday Sculptures' blog he states: 'The sculptures only exist for a moment as they are photographed and changed again. Them are made out of materials that come across my path. These encounters threat into stories with an unknown scenario'.

Harm Hajonides is a dutch artist who lives and works in Amsterdam. He studied at the Gerrit Rietveld Academy. Since the 1997 he has taken part in numerous group shows mainly in the Nederlands. During the years he developed his personal style creating works that can be kept in an archive in A4 folders. Ton Zwerver is a sculptor, photographer and graphic artist. Born in Amsterdam, he studied at the Gerrit Rietveld Academy and at the Rijksakademie. Since his first group exhibition at the Stedelijk Museum Amsterdam, Zwerver has partecipated in several solo and group exhibitions worldwide. His work has been acquired by various institutions among which: the Stedelijk Museum Amsterdam, Frans Hals Museum Harleem, Ned. embassy New York.