The Spanish artist group Democracia and the Romanian artist duo Mona Vatamanu & Florin Tudor (Revolutie) use artistic experiments to explore means of dealing with reigning social conditions and inequities in order to navigate a way out of powerlessness. With accompanying program Polizey. 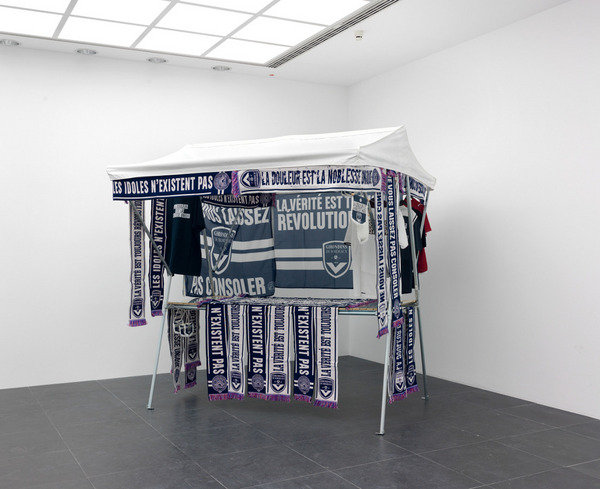 Economic crises, floods of refugees, climate change, and terrorism. Every day the media report on crises, catastrophes, and global hazards. In the face of such media-driven and real threat scenarios arises a diminishing sense of trust in the capacity of governments to act.

Political control mechanisms are apparently insufficient, and political alienation is on the rise. The result is a feeling of powerlessness, produced both by the impression of ongoing governmental malfunction and sustained social injustice as well as seemingly unresolvable catastrophe scenarios. The powerlessness of a society can lead to dictatorships and wars. For the individual, powerlessness can foster internal withdrawal or political radicalization.

Media reports contribute significantly to this powerless view of the world and to skepticism towards the leadership capacity of the state. In the competition for attention the media must obviously inflate the relevance of events or situations, speculating about their threat potential and creating monsters in the process. Mistakes thereby become scandals, partial successes turn into failures, accidents are made into catastrophes, crises are billed as global crises, and news becomes a negative sensation.

According to Guy Debord the society of the spectacle is characterized by a successful blinding of the populace through consumption and the satisfaction of individual desires. In the present, one might view the core of the spectacle as situated in catastrophe and in aporetic skepticism. The question of exploring contemporary forms of Situationist experiments thus becomes a relevant issue for critical cultural projects. In the face of a superior power, how can powerlessness become a situation that reopens the game?

POWERLESSNESS, A SITUATION consists of the two exhibitions DEMOCRACIA and REVOLUTIE as well as the accompanying program POLIZEY. The Spanish artist group Democracia (Madrid) and the Romanian artist duo Mona Vatamanu & Florin Tudor (Bucharest) use artistic experiments to explore means of dealing with reigning social conditions and inequities in order to navigate a way out of powerlessness. The event program organized by Felix Trautmann (Frankfurt) examines the role of the police in the assertion and transformation of the prevailing order.

DEMOCRACIA
The Spanish artist group Democracia was founded in 2006 in Madrid by Pablo España and Iván López. Its projects are a continuation of the activities of the renowned group El Perro (1998–2006). Democracia’s artistic practice is based on interventions in the social and political fabric. Drawing on Situationist strategies, Democracia stages prevailing social conditions that function as trial situations and process-driven scenarios. They are conceived as participatory works in order to test the potential for active involvement. The projects consistently focus on the manipulative potential of media images and appropriate popular and propagandistic strategies of mass communication. At times the artistic approach of Democracia recalls the provocative projects of Christoph Schlingensief. Using the gesture of irony, Democracia exaggerates given social circumstances as a strategy to raise awareness for problems. Particularly through the experimental and playful nature of their work the Spanish artist group challenges viewers to reflect on their political, social, and media habits. They address a wide range of issues, from the approach to ETA terrorism in the Basque Country to the self-sufficient strategies of the poor in a consumer society. To realize their ideas the members of Democracia work with various segments of the population, for example with radical football fans, adolescent Parkour athletes, and inhabitants of poor neighborhoods.

The artistic work of Democracia usually takes the form of large-scale installations of multiple-channel video projections in combination with photographs, objects, banners, etc. Sometimes they also produce large-scale bronze sculptures. Their monumental sculptures, seldom exhibited, will be on view in the exhibition at the Frankfurter Kunstverein.

REVOLUTIE
Mona Vătămanu (*1968 in Constanţa, RO) and Florin Tudor (*1974 in Geneva, CH) have been working as an artist duo since 2000. Their artistic practice includes film, photography, painting, performance, participatory and site-specific projects, and installations. Working with themes related to architecture and urbanism, Vătămanu/Tudor combine abstract history and concrete memory in poetic acts and performative gestures. Social or political issues are not directly represented in pictures or shapes; instead the fictional and constructed character of representation is emphasized. They often situate historical fragments in paradoxical contemporary narratives, first making a political context visible and then enabling its analysis.

In “Democracia, Revolutie & Polizey” works of Vătămanu/Tudor are presented that relate to upheavals in social systems in recent decades, in particular the ideological consequences of the Romanian Revolution that ended on December 25, 1989 with the execution of the Ceausescus. These works by Vătămanu/Tudor address “revolution” (in Romanian: “revolutie”) as a concept onto which associated ideas are projected: its promise of liberation from powerlessness as well as its potential and inspiration as a form of romantic transfiguration.

First shown at the Venice Biennale in 2011, Vătămanu/Tudor’s super-8 film “Rite of Spring” (2010) depicts a typical, almost ritualistic children’s game on the streets of Bucharest. The game is played every spring, when the poplar trees bloom and their seeds are blown by the wind into large piles that collect in the gutters of the streets. Children have great fun igniting the soft flocks with a lighter to see how far the fire will continue down along the curb. Flames sometimes dart up from large piles, and with a bit of luck the blaze even spreads. The image of this children’s game seems to harbor dangerous and revolutionary potential—even more so when one learns that the film was shot along the dilapidated streets that still persist in the center of Bucharest, near Ceausescu’s “People’s Palace,” which now houses the Romanian Parliament. The children’s playful act of arson is a poetic and provocative gesture that bears the promise of renewing the established system. Yet it also has a melancholic note: the cute little fire quickly extinguishes, and the children burn no more than a finger in the process. This ambivalence is underscored by the film’s lack of an audio track—there is neither ambient sound nor a voiceover.

POLIZEY
The preservation of a political order and the enforcement of its laws always seem to require an organization that can be relied upon in case of doubt. This organization continues to be the “police.” Everyone knows the police or how they look. However, a few people in uniform alone do not constitute a police force. The policing practices of prevention, control, and the prosecution of criminals—whether carried out in a visible or concealed manner—permeate all aspects of society. The history of the modern police and the adaptation of police work to the given conditions of changing historical eras demonstrate its close correlation between the police force and social conditions. Policing not only influences political, social, and legal coexistence but also the self-understanding of every individual, from everyday habits to the expression of political will. What conditions govern to what extent the police is established as this power in society? Who are the police? Who calls them? Who contradicts/confronts them and who takes on this profession and for what reasons? Subjective experiences with the police as well as everyday police work equally raise questions as to the social role and function of the police.

The police become a subject of criticism as soon as they fail their mandate, for example by exacerbating a state of insecurity or overstepping their jurisdiction. As both an armed force and a power of government, the institution of the police gives rise to the unsettling question as to whether there is an inherent element to the police that can never be sufficiently civilized—a question that then undermines the legitimation of the police as a govermental instrument for preserving the established order.

“Polizey” is a program of events that addresses these questions and issues through a range of formats. It includes artist talks, panel discussions, lectures, performances, and film screenings.