"Dear Portrait" includes 20 international artists with painting, sculpture, drawing and video. The exhibition of Franco Vaccari will shed light upon aspects of his work. Annette Kelm pays to both the formal and lyrical quality of her photographs. Becca Voelcker presents her work Memos which focuses on an abandoned cruise liner on the North Wales coast. 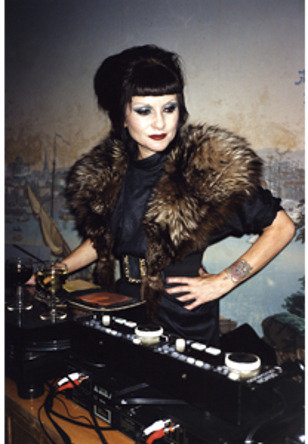 Dear Portrait includes twenty international artists, with works that deploy the use of the portrait in various ways, and invites their subjects to respond to the works involving them. Through both the selection of works, and an exhibition concept that gives voice to those portrayed, Dear Portrait raises new understandings of ‘the portrait’, as well as of exhibitions based on traditional themes.

RESPONDENTS TO THE WORK, AND IN THE WORK, INCLUDE:
Ed Ruscha, Jonathan Monk, John Baldessari, Lynda Morris and Lee Ranaldo amongst others.

Through painting, sculpture, drawing and video Dear Portrait includes instances where the ‘portrait’ falls in line with traditional standards, together with those that potentially expand the definition of what portraiture might be.

As a gathering of portraits, Dear Portrait contains a number of conversations between an artist and an individual or a group of people. While this dialogue is inherent, the individuals represented in each work, in being invited to write a text in response to the work and the artist producing it, give rise to another. As the texts generate an additional portrait through the written word, they also deviate from the standard interpretive text accompanying a work on view in a museum or gallery. Shown alongside the respective works, they offer a deeper insight, revealing something that is largely unknown about the artwork or artist – something anecdotal, intimate and sentimental, and always personal.

While Dear Portrait presents the portrait and its various expressions today, it also refreshes the perception and experience of exhibitions as a whole – how they take form, how they are presented and how they are viewed, received and interpreted.

MOSTYN | Wales is delighted to present a solo exhibition of the work of Italian artist Franco Vaccari.

Since the 1960s, Franco Vaccari has been working on a practice that is conceptual, poetic, and one of the first in a long tradition in which the viewer is key.

This exhibition at MOSTYN brings together works from amongst those for which the artist is perhaps best known. It will exemplify his distinctive approach to artmaking that sets up the conditions of an event to occur without dictating the results. In so doing, the exhibition will shed light upon aspects of his work – such as the portrait and the change in human appearance – not previously fully explored in a single presentation of his work.

Leave on the Walls a Photographic Trace of Your Fleeting Visit (1972), included in the exhibition, typifies the spirit of Vaccari’s practice perfectly. Conceived for the 1972 Venice Biennale, it originally consisted of a Photomatic kiosk exhibited in the gallery space and an instruction in four languages (within the title of the work) which prompted the audience to use the kiosk and then affix their photo-strip to the wall. Vaccari followed up this work with a second version in 2010, which he produced for the Gwangju Biennale, with exactly the same set of conditions. As in the previous edition, it encouraged the participation of the audience and for them to contribute to a growing, ever sprawling display that ultimately made a portrait not only of the audience but also of the activity of the exhibition itself. This exhibition at MOSTYN introduces a selection of photo-strips from the large number that these two earlier versions generated – the 1972 edition resulted in around 6000 alone.

Another significant work by Vaccari included in this exhibition is titled Photomatic D’Italia (1972-4), and was subsequently developed after the piece in Venice. Stemming from an invitation from the Italian Government to make use of all Photomatic kiosks operating in Italy – around 1,000 kiosks in total – this piece allowed his earlier investigation to leave the confines of the gallery space, entering the public realm and available for use around the clock.

In addition to these works, there will be a display of Vaccari’s books, which are both catalogues of the earlier projects, and artworks in themselves.

This exhibition is displayed at MOSTYN in Galleries 2 and 3 and acts as a counterpoint to the group exhibition ‘Dear Portrait’ and the solo exhibition by Annette Kelm. It is part of series of exhibitions at MOSTYN that offer different viewpoints of the same subject, from the traditional understandings of the subject to a more expanded and nuanced one, with the three described here focusing on the classic art genre of the portrait.

About the Artist
Franco Vaccari was born in 1936, in Modena, Italy. He studied sciences and graduated in physics before becoming an artist. His work has been shown at four Venice Biennales (1972, 1980, 1993, 1995) and presented at the Centre Pompidou in Paris and MoMA, PS1 in New York, among numerous others. In addition, he is also an established critic and writer, and known for his critical essays on the subject of photography.

MOSTYN | Wales is pleased to announce a solo exhibition of German born artist Annette Kelm, which marks the first for her work in a UK public institution

The work of German artist Annette Kelm seems, at first glance, to revel in the fleeting, the accidental and the arbitrary. Closer examination however emphasises the attention that Kelm pays to both the formal and lyrical quality of her works, as well as an analysis of the medium of photography itself. Neither essentially formal nor purely conceptual, her work also oscillates between various genres of photography – still life, portraiture, documentary and advertising – where no one is given any special place of prominence.

The temperament of Kelm’s images and the particular framing of the things she photographs appear tightly composed and highly considered, yet they also harness the ability to remain completely ambiguous. Her images merge seemingly disparate content, and this is true even of her apparently clearest-cut work depicting people, as seen in this exhibition. Such uncertainty is Kelm’s unique trait and one which elicits a consideration of the significance of the subjects themselves.

While the works’ various contextual and historical references appear to eschew any singular readings in regard to both theme and concept, together they come to question the depiction, presentation and representation of images. Although Kelm’s work stays true to the traditional understanding of photography – the primary medium that transports her ideas – it also infers the sculptural; in this way her practice could be understood as a delicate process of choreography.

This exhibition presents her work Memos (2012) which focuses on an abandoned cruise liner on the North Wales coast near Flint. Luxuriating in layers of association, memory and narrative, the work points to both the significance of the moving image and its ability to recall our associations with other times and locations. It also demonstrates Voelcker’s erudite approach to the history of cinema and, in particular, the use of film as a medium for art-making.

Inspired by Marcel Broodthaers’s Musée d’Art Moderne, Département des Aigles – a fictitious museum that Broodthaers created to critically examine and reflect on the presentation, exhibition and reception of art – Gallery 6’s space has its own distinctive identity, both visually and conceptually. Similar to Broodthaers’ project with its separate aesthetic and distinct agenda from its surroundings, Gallery 6 presents itself as a gallery within a gallery.

A publication will accompany this exhibition, featuring a text by MOSTYN Visual Programme Curator, Adam Carr, along with an interview with Becca Voelcker.