Urs Fischer, Jacob Kassay & Jakub Julian Ziolkowski. An unusual combinations each artwork turns into the ghostly reflection of its neighbor, pieces engage with one another forming alarming silhouettes making it impossible to distinguish hosts from guests. 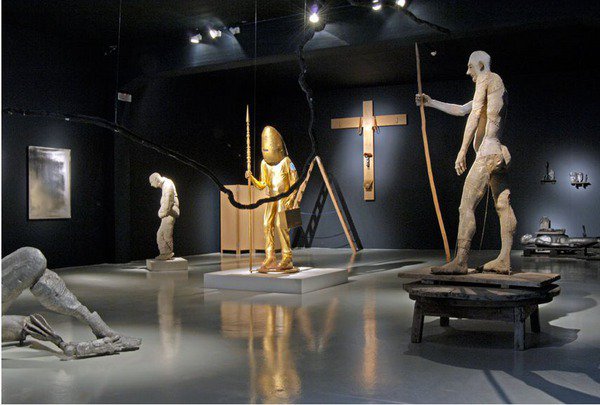 In a series of symbiotic encounters, DESTE will juxtapose artworks by Pawel Althamer with works by artists Urs Fischer, Jacob Kassay, and Jakub Julian Ziolkowski challenging the viewers to reconsider their preconceived notions about art.

For four months Althamer's work will be interrupted by incongruous presences and perturbed by subtle contrasts in a series of parasitic relationships: his totem-like sculptures by Urs Fischer's shifting mirror and line sculpture; his Mezalia, a fragmented urban landscape, by Jakub Julian Ziolkowski's nightmarish universe, and a selection of his sculptural work by Jacob Kassay's shimmering silver canvases.

As a result of these unusual combinations each artwork turns into the ghostly reflection of its neighbor, pieces engage with one another forming alarming silhouettes making it impossible to distinguish hosts from guests.

Pawel Althamer (born, Warsaw, Poland, 1967)
Through his work, which ranges from sculpture and drawing to installations and performance, Pawel Althamer investigates the meaning of basic visceral human relationships, questions the limits and deeper meaning of identity and examines the world we live in. Trusting in the power of art to change the world, the artist’s work addresses the social and economic conditions that structure our society. A prolific artist and a key figure of Poland’s art scene since the 1990s, Althamer has pursued the transformative potential of art and, through his work, offers viewers a new understanding of everyday life.

Pawel Althamer has established a rich sculptural oeuvre, focusing on the human being, especially on highly realistic, but at the same time surreal, portraits of himself, his family members and of the ones close to him (Sylwia and Adam, both from 2010). The human portraits he creates are often depicted through life-size figures, made of organic materials such as animal intestines, hay, hair and wood as well as plastic. His uncompromising figurative sculptures look like bodies in wait for souls and, especially in the case of sculptural groupings, a collective spirit. As Althamer himself has stated, his “interest in figurative sculpture stems from a fascination with divine creation”.

The many self-portraits and autobiographical works that Althamer has created over the years, suggest the artist’s interest in self-exploration. Althamer uses his own body and self as vehicles to develop a different relationship with the world. By portraying himself at times in the present at other times in the past or future, Althamer offers viewers a visual autobiography. His Self-portrait as an Old Man (2001), for example, is a prediction of the artist’s life to come and an effort to unearth his deepest roots. Similarly, in his Mezalia (2007-2010), while originally created as a scenic backdrop for filmmaker Jacek Taszakowski’s animated film of the same title, Althamer has not hesitated to include autobiographical elements. An installation consisting of three free standing models of an alternate reality, Mezalia offers a journey into the past and present life of the artist. A young Althamer can be seen in a semi-urban, pre-lapsarian landscape, mostly likely Brodno where he grew up, signifying the artist’s idyllic youth. Across from this lost Eden of childhood, an adult Althamer, the Althamer of the present time, stands in the window of his studio looking out towards his young self, reminiscent of his own past.

Urs Fischer (born, Zurich, Switzerland, 1973)
Since the mid-1990s, Urs Fischer has created an abundance of art works ranging from mixed media painting, drawing and collage to sculpture, silkscreen prints and installation. Through his work, Fischer aims to question the history of art and sculpture and challenge our relationship to the body, the notion of time and the status of the object. Combining illusion and reality and various extremes such as flat versus deep and formal versus abstract, Fischer’s works appear both logical and absurd at the same time. By distorting, enlarging and recontextualizing everyday mundane objects, he offers them a new, often humorous, meaning and challenges the viewers’ preconceived notions of them. For Cioran Handrail (2006) for example, Fischer has taken a simple, two-dimensional non-linear line that exists in all art forms, be it drawing, painting or sculpture, and has turned it into a three-dimensional object.

Another important aspect in Fischer’s work is time, clearly evident in his Death of a Moment (2010). One of the walls in the first room of the exhibition has been covered with floor-to-ceiling mirrors which are set into motion by a hydraulic system. The mirrors’ regular, barely noticeable tilting movement, makes the room appear distorted and fluctuating, challenging the viewer’s spatial perception and, simultaneously, alluding to the passage of time and emphasizing on the transience of matter. Visitors who enter the space where Fischer’s mirrors are installed, are confronted by their own image and become part of the installation. Similarly, the works that exist in the same room are reflected and retracted infinitely by the shifting mirrors, altering and reorganizing one’s conventional modes of visual perception.

Jacob Kassay (born Buffalo, NY, 1984)
Jacob Kassay’s monochrome, abstract canvases are a strange hybrid of monochrome painting, metallic sculpture and interactive installation. Trained in photography, Kassay considered putting a painting through the photographic development process. His signature, technically complex silver paintings are thus created by priming canvases and then immersing them into chemical solvents. This process dries the paint and creates burn marks around the edges and any other parts of the canvas that are left unprimed and exposed to the chemical solution.
Kassay’s works resemble rough mirrors that imperfectly reflect in varying degrees of clarity light and shadow and register color and movement. As these shimmering, quasi-reflective mirrored surfaces delicately capture and abstract the silhouettes of the audience, they “come alive” and become interactive installations that lie in conversation with each other, the artworks in proximity and the existing architecture of the space.

Jakub Julian Ziolkowski (born, Zamosc, Poland, 1980)
Like most of his paintings, Jakub Julian Ziolkowski’s Untitled (2009) offers a wild hallucinatory journey into a strange and often frightening universe. Influenced by folk tales and the, often dark, history of his native country, Ziolkowski’s unnerving landscapes investigate the darker side of human nature. The lavishly detailed and chaotic fantasies he creates are dominated by the human body in a grotesque and gory manner, usually defiled and dissected. Heaps of dismembered body parts are placed in eerie landscapes of decay. The surrealist nature and grotesque style and subject matter of his paintings are reminiscent of Philip Guston’s existentially charged cartoons, James Ensor’s death-haunted carnival masks and his weakness for skeletons and Hieronymus Bosch’s nightmarish scenes. Digging in the history of art, Ziolkowski combines such imagery and elements with visualizations of his own fears and experiences, blending them into new, wildly surreal and disparate scenes, where figuration, abstraction and ornament often collide.