"Yonder" features a combination of Marnix Goossens' photographs and a short video: a surrogate nature in slightly run-down interiors. Photographers' duo Otto Kaan turned this practical problem into an aesthetic solution, they presents 4 new projects. Through his photos, writing and films, Tim Hetherington provides us with new ways to look at and think about human suffering as a result of war. 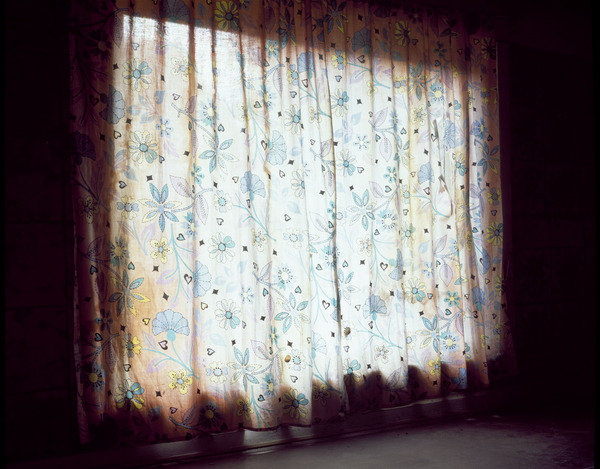 This summer Foam is presenting a series of new work by Marnix Goossens (born Leeuwarden, 1967) in the exhibition Yonder. In Yonder Goossens concentrates on surrogate nature in slightly run-down interiors, showing man's secret yearnings for exotic destinations and snow-covered mountains in the form of palm-print wallpaper and decorative posters. The exhibition features a combination of Goossens' photographs combined with a short video.

Nature forms a constant source of inspiration for Goossens, yet he makes no use of spectacular panoramic views or untouched wildernesses. Instead he uses tiles with plant motifs, wood grain plastic self-adhesive film and flowery wallpaper as a means of escaping the claustrophobic interior of the house. Photographs showing strange corners and reproductions are interspersed with photographs of windows through which light comes streaming in, also bringing a suggestion of the lightness of our being.

Goossens manages to find the beauty in the smallest details of the everyday world around us. He registers commonplace, almost boring objects, but with the aid of his technical camera he turns them into something special, recording details almost too small to see with the naked eye. The perfect composition, profusion of details, nuances in colour, fitting frame and appropriate lighting for each shot are chosen with care, enabling him to give his own unique view of the unexpected side of otherwise ordinary places.

Work by Marnix Goossens has featured in national and international exhibitions in locations such as Foam, the Stedelijk Museum (Amsterdam), Huis Marseille (Amsterdam), Maison Européenne de la Photographie (Paris) and The Art Institute of Chicago. He has published several photo books, including Regarding Nature (2001), Deep Light (2006) and Yonder (2013). His work is featured in collections in the Netherlands and abroad.

The exhibition Yonder by Marnix Goossens is sponsored by the Mondriaanfonds. The book: Yonder, published by Roma Publications, designed by Remco van Bladel and with text from Maria Barnas, will accompany the exhibition [132 pagina's, 20 x 28cm, hardcover, ISBN 9789077459997 price €32,-, special edition €200,-].

What do you do when you have just graduated from art school and you have to set up your own studio, but you cannot afford any expensive equipment? What if you always work together, always share everything, but do not have a system? Photographers' duo Otto Kaan turned this practical problem into an aesthetic solution. In Foam 3h the duo presents four new projects in the exhibition Works. Otto Kaan consists of Berend Otto (1985) and Guus Kaandorp (1986).

Works is the result of several studies the duo produced in their studio. The workshop provoked Otto Kaan's curiosity, it became a space for new discoveries and experiments. Starting point was the wide range of equipment with which they use as photographers. They dreamed up new purposes and functions for the material, which led to surprising combinations and results. The series is a study into form, which at first sight seems serious, but turns out to be made with a lot of humour.

In the series Photographic furniture we see their own designs and made-to-size pieces of furniture made for and consisting of photographic equipment. Otto Kaan had the designs produced to professional standards and recorded them afterwards; the photographic image is the only proof of their functionality. In the double slide projection Scaffoldings the duo show the results of their architectural experiments, which they constructed in their studio to monumental size and measuring up to six meters high. After recording it, they recycled the material into a new and complex construction. Flower make-up is a series about counterweights for tripods, in this case bags of garden pebbles. Using a simple trick, the function changed from purely practical to a new and aesthetic one. Reflection screen tests the viewers' way of seeing and conjures up a sense of alienation, just like the other series.

The work by Otto Kaan is a manifesto for an alternative way of seeing. It lets us look at the medium of photography in a new and different way. First and foremost however it raises questions about ourselves. Without taking itself too seriously and by putting things into perspective.

The book Steigers accompanies the exhibitions which is published by Centerfold Editions and designed by Xavier Fernández Fuentes.

Infidel is the first exhibition of Tim Hetherington (1970-2011) in the Netherlands. Foam presents a mixture of his photographs and videos, drawn from his series Sleeping Soldiers, Infidel and Diary. In his work Hetherington focused on the experience of war from the perspective of the individual. Through his photographs, writing and films, Hetherington provides us with new ways to look at and think about human suffering as a result of war, both from the perspective of ordinary soldiers as well as the civilians caught up in the conflict.

Infidel consists of large-scale images of the Korengal Valley in Afghanistan, taken to set the scene, as well as intimate portraits of the American troops stationed there. The photographs were taken over a period of one year in 2007-2008, during which Hetherington managed to get incredibly close to the soldiers. Describing the photographs in Infidel, Hetherington said: "It's all about the men. I didn't want to pretend this was [...] about the war in Afghanistan. It was a conscious decision. [It] comments on the experience of the soldier. It's brotherhood. The flow of pictures is to introduce you to the Korengal Valley first and then to see the men in an intimate way…To get to know them and how they lived. Then you see them in combat in the traditional combat style. Finally, you see them as young men, sleeping."

Alongside the prints of Infidel, Foam will show Hetherington's film Sleeping Soldiers (2009). In this film we are confronted with intimate and tender portraits of soldiers asleep whilst stationed in a combat zone. It sheds light onto another and previously unseen part of modern warfare. The film drives home how incredibly vulnerable and young these soldiers are. It proves exactly how close the photographer managed to get to the soldiers of 173rd Airborne division. The exhibition also explores Hetherington's private thoughts and feelings about his work in Diary, a short film that collages original footage taken by Hetherington throughout his career. The photographer described Diary, which he directed in 2010, as "a highly personal and experimental film that expresses the subjective experience of my work, and was made as an attempt to locate myself after ten years of reporting. It's a kaleidoscope of images that link our western reality to the seemingly distant worlds we see in the media."

The exhibition has been produced in close cooperation with Yossi Milo Gallery in New York, and has been made possible with the support of the Sem Presser Archive Foundation.