Natural Motion. New works and the artist's most spectacular installations: Imposing Whale Skeleton. Orozco's pronounced sensibility for cultural and national or state attributions is seen in his incorporating antithetical elements into his practice of art. On the one hand, he selects motifs, techniques, and references; on the other, he employs artistic strategies that were developed by modernism. 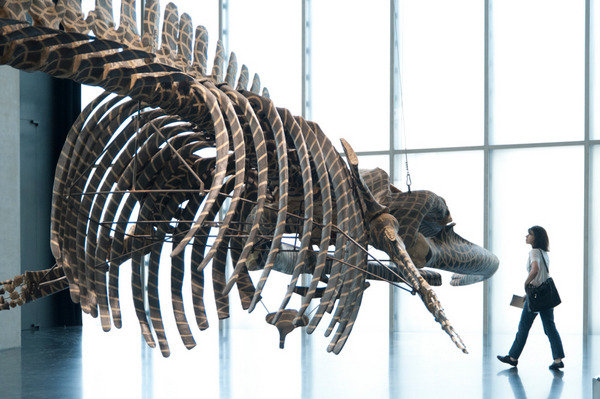 Born in 1962 in Xalapa in the Mexican state of Veracruz, and living today in New York, Paris, and Mexico City, Gabriel Orozco is one of the best-known international artists of his generation. Following a major retrospective from 2009 to 2011, which was on view at the New York Museum of Modern Art, the Kunstmuseum Basel, the Centre Pompidou in Paris, and the Tate Modern in London, in Bregenz Orozco will be showing for the most part new works that have been conceived specially for the exhibition.

Gabriel Orozco is that rare artist who can switch between classical, quasi-autonomous paintings or sculptures and transient, seemingly improvised installations, interventions, objects, and photographs. Enormously versatile in approach, he sometimes draws on atmospherically charged, found, or occasionally casual situations and objects, as well as the exact opposite: the production of precise and perfectly crafted objects. Hence, his works take up a position between analytic conceptual art and formally as well as sensually balanced artifacts. Rational engagement and the physical experience of the immediate emotional encounter with his works enter into dialog in Orozco’s oeuvre.

From the very start of his career, Orozco produced such icons of contemporary art as the photographic work My Hands Are My Heart (1991) or La DS (1993), a radically slimed Citroën DS. His early projects such as Yoghurt Caps (1994), or Parking Lot (1995), which used a ground-floor gallery as a garage, are no less legendary.

Orozco’s pronounced sensibility for cultural and national or state attributions is seen in his incorporating antithetical elements into his practice of art. On the one hand, he selects motifs, techniques, and references, for instance, that are specifically Mexican or that are deeply rooted in Latin-American cultural traditions; on the other, he employs artistic strategies that were developed by modernism. He insists on cultural distinctions, while at the same time developing works that call into question over-rigid, identity- imposing definitions.

Hence, his new stone sculptures confidently stand in the modernist tradition of European sculpture from Hans Arp and Brancusi to Barbara Hepworth, and yet they can also be seen as expressing precisely the engagement with indigenous cultures. Orozco highlights this relation to these extra-European roots by, among other things, presenting his stone sculptures in a way that distantly recalls an anthropological museum’s atmospheric style of display.

In addition to the predominantly new works, the Kunsthaus Bregenz is also presenting one of the artist’s most spectacular installations. At its first presentation in London nearly seven years ago, his almost fifteen-meter-long synthetic resin reconstruction of the skeleton of a whale caused a sensation. The inspiration for the sculpture was a whale that had stranded on the southwest coast of Spain. The artist covered the artificial bones of the mammal with a complex geometrical pattern in graphite and thus set up a dialog between art and the whale’s nature-bound, creaturely aura.

This work also brings out clearly Orozco’s interest in traditional customs, rites, and cultures that are close to nature. At the same time, however, it can be viewed as an extrapolation of the concept of the readymade, a concept central to modern art, which the artist has paradoxically updated for the present day by referencing traditions that lie far in the past.

A further highpoint of the Bregenz exhibition is a new work by Orozco that cites one of his best-known earlier works in a modified version. With this startling conceptual gesture the artist not only questions his own reception – he at the same time puts the current validity of his already twenty-year oeuvre to the test.

By including a number of his earlier works in his Bregenz exhibition, Orozco anchors his new works in his own history, allowing viewers to engage more deeply with his characteristic practice of spanning all genres and media.

Following the show at the Kunsthaus Bregenz, Gabriel Orozco’s exhibition will be on view at the Moderna Museet, Stockholm.

A gray whale stranded on the Spanish coast was the inspiration for Gabriel Orozco’s sensational, almost fifteen meter long work. The giant whale skeleton installation has permitted the artist to create an impressive composition that merges art and nature. Initially the enormous bones had to be appropriately prepared by a team of experts. In order to counter any possible decay of the whale skeleton, life-size reproductions of the individual bones were faithfully cast in artificial resin. Following this process lasting three months, Orozco had the Dark Wave skeleton completely covered with dynamic graphite drawings. With the assistance of a group of art students, concentric circles were applied individually to the bones. A close examination of the fascinating skeleton reveals complex geometrical patterns resembling those of waves expanding from a stone thrown into water. The skeleton, suspended by steel cables, is reminiscent of an enormous mobile and offers visitors to the Kunsthaus the unique opportunity to encounter an enormous giant of the ocean at eye level. In this work Gabriel Orozco has demonstrated the elementary power of nature, whilst also referencing ancient myths and biblical narratives.

Gabriel Orozco works with rocks that hold within themselves a long history. These are river stones, originating from the coast of Guerrero in Mexico. The rounded stones are a variation of a theme to which the artist constantly returns: the circle as the beginning of things, and all its derivatives: the sphere, the ball, the disc, the wheel, the planet, the orbit. They are bodies that speak of what the circle speaks: mobility, cycles, games, fullness, rotation.
Their natural form and beauty persists while the carved geometrical patterns permit a tactile and visual comparison of the textures that exist within the rock and its history of natural motion: the rough outside crust eroded by nature, versus the polished internal surfaces carved by man. But what diminishes the original materiality of the stone is precisely what increases the sense of the work (it stops being a stone to become a sculpture).