Recluse of history. A gathered collection of portraits, largely of cubist drawings of faces by Pacanowska - including a self-portrait, are psychological studies in clean, deft, scalpel-succinct lines. 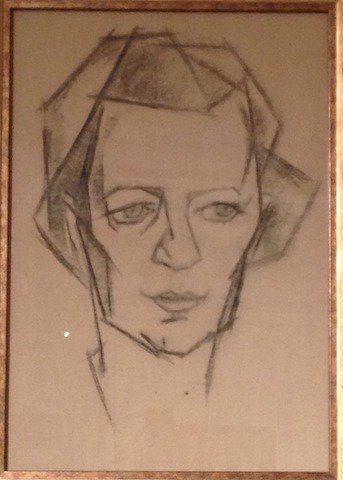 From a drawing of soldiers made by Jean Louis-Forain at the beginning of World War I, with the words 'le commencement de la peur'/ 'the beginning of fear', to cubist drawings of the town of Lodz, by Felicia Pacanowska, a rare woman cubist artist who survived the holocaust of the second world war, to her drawing of a man handling the levers of a large magnificently spinning factory; to the Indian open cast mines of Prabhakar Pachpute's charcoal drawings, to the photographs and scripts of Amol Patil's father's theatre written for the mill workers in Bombay - the exhibition graphically reveals autobiography, even as it takes in an ambitious sweep of history.

Born in 1907 in the industrial city of Lodz, Felicia Pacanowska's parents were artists and were part of the 200,000-large Jewish population in the city. The city was the most industrial city in central Europe and thus became an important centre of the Nazi occupation. The Lodz ghetto was set up where its Jewish population was put to work to produce goods for the Nazis. Only 900 survived the holocaust in Lodz. Felicia lost her entire family, surviving only because she had moved to Paris to be a part of the avant-garde art movement there.

A gathered collection of portraits, largely of cubist drawings of faces by Pacanowska - including a self-portrait, are psychological studies in clean, deft, scalpel-succinct lines. Looking on, a series of drawings by Shernavaz Colah, titled by her, 'it-so-ur-sco-pop-hob-ia', referencing a phobia or anxiety caused from being stared at by others, and the hidden sub-text of an oil painting by Justin Daraniyagala, a reclusive Sri Lankan artist, on whom she had been writing and researching all of last year; ending in a tremendous book, and these drawings of disquiet. In her series, the bearded 'Philosopher' of Daraniyagala's painting, surrounded in his studio, by crowding faces, transforms its phobia, as a claw moving towards a seated nude woman in the chaos of faces, transcends and combines into a saint with a trident. A heavily coded and stimulating series, conversing simultaneously, and perhaps unconsciously, with art history - the 'gaze' directed on the nude or the model that so troubled art critics like John Berger in his seminal book 'Ways of Seeing'; and with the subtexts and untold anxieties hidden and coded through the works of Justin Daraniyagala, enriching his keen male perspective, with a female one.

Justin Daraniyagala, part of the Sri Lankan avant-garde 43 Group, was encouraged from a young age to pursue the career of an artist. Able to travel to Europe, he exhibited his works alongside painters like Picasso in 1935; and preceded his Indian contemporaries, like MF Hussain and Francis Newtown Souza, in interpreting cubism through his own lens. There are then two kinds of recluses from the standard tellings of a cubist art history - the books on display mention few female cubist artists; and recognise no non-European artists. Daraniyagala was in fact reviewed by John Berger, who saw his practice as a real demonstration of painting independent of other styles and outstanding alongside his European contemporaries.

Yet, Daraniyagala left Europe to live at his parents' estate in Sri Lanka, and died young, in 1967 from tuberculosis, leaving behind a large body of works. Shernavaz Colah's writing on Daraniyagala, interprets the red crosses painted over the mouths of his late paintings, as Daraniyagala's coded concession of his illness. His earlier works are romantic studies of women from a place once called Ceylon, gradually turning into grotesque anxious faces, (compared with those of Pacanowska's), as his health deteriorated, and as the island took on the identity of Sri Lanka.

As South Asia's communal conflicts take political overtones, viewing Daraniyagala's practice in the contemporary, for instance India and Sri Lanka's discrimination against sections of civilians, returns us to the deep fear of Jean Louis-Forain's, 'Le commencement de la peur' made in response to the start of World War I. In the exhibition, the minotaurs and Don Quixotes of Picasso, Daraniyagala, and Dali, equip us only with a vocabulary, tested and invaluable in that, with which to think out our present time.