ONE-Time Pad. The exhibition brings together over two hundred works from the past five years, most of which are previously unseen in the UK and have come directly from the artist's studio, including painting, sculpture, drawing and works on paper. 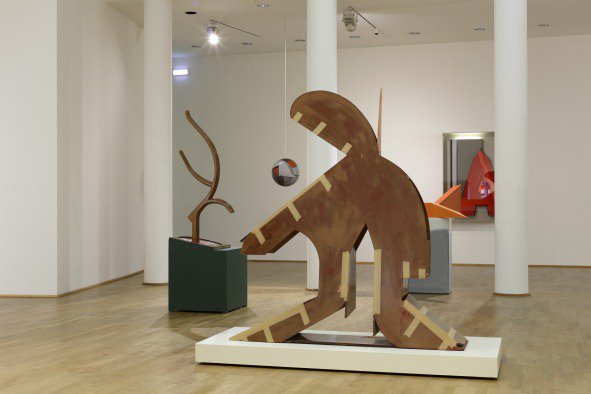 BALTIC Centre for Contemporary Art, Gateshead presents an exhibition of new and recent work by Thomas Scheibitz (born in Radeberg in 1968), one of the leading German artists of his generation. Scheibitz began developing a new form of conceptual painting during his studies at the School of Art in Dresden in the early 1990s. He became established internationally following initial exhibitions in Dresden, Berlin, London and New York.

This large-scale presentation of Scheibitz’s work will retrace the conceptual and painterly development of his career with a particular focus on the human figure and the determination of form between figuration and abstraction. The exhibition will take place across the gallery on Levels 3 and 4 and bring together over two hundred works from the past five years, most of which are previously unseen in the UK and have come directly from the artist’s studio, including painting, sculpture, drawing and works on paper.

Scheibitz draws upon motifs and themes from the everyday and popular culture in the form of film, literature, music and advertising as well as architecture. He also takes inspiration from art historical imagery such as Renaissance paintings or Medieval engravings which he places in new perceptual contexts. The artist feeds his visual memory with a collection of found material including photos, drawings, newspaper clippings, memos, book pages and objects. He filters these through his own thought processes and retrieves them as a basis for the forms and structures of his paintings and sculptures. The finished work is a synthesis of object and image with a distinctive visual language; for the artist, the boundaries of figuration and abstraction are obsolete.

The exhibition will include an archive of the artist’s source material and models together with a new sculptural work commissioned especially for BALTIC. The title of the exhibition One- Time Pad (also the title of a painting by Scheibitz from 2012), takes its name from a method of encryption which is used to transmit secret messages but considered to be impossible to crack if used correctly. It alludes to the coding process that Scheibitz employs in his work which we are invited to unlock.

Thomas Scheibitz: One-Time Pad is organised by MMK Museum für Moderne Kunst Frankfurt am Main. The presentation at BALTIC is generously supported by Institut für Auslandsbeziehungen (IFA), and the Goethe-Institut London.
The exhibition is accompanied by a major new publication designed by Thomas Scheibitz, with a foreword by Susanne Gaensheimer, texts by Beate Söntgen and Mark von Schlegell, and a conversation between Thomas Scheibitz and Isabelle Graw. Published by Walther Kӧnig