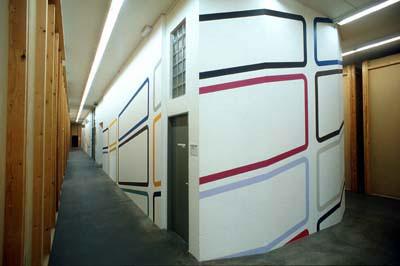 Over the past twenty years, the French artist Claude LevÃªque has realized environments on sites that induce him to set up his exhibitions. Grand HÃ´tel, the first such at the CrÃ©teil Maison des Arts in 1982, offered framed photographs mounted on an altar made inaccessible by broken pieces of glass scattered over the floor. For some time, his inspiration was drawn from childhood experiences and impressions and progressively moved to an opening to the world. Today, Cl. LevÃªque 'does not deliver a message but only wants to create areas of reactivity'. Pleasing or revolting, appeasing or stimulating, his installations never leave one indifferent. Mamco's fourth floor welcomes the Albatros project, each of the seven rooms offering the setting for an installation produced in situ. Calling upon his various senses, the visitor is invited to penetrate a universe made of sensations and evocations, to impregnate himself in an ambivalent environment composed of hypnotic video images, blinding lightings, intoxicating fragrances and deflected materials.

In the earyly 60's, GÃ©rard Fromanger begins to paint in black and white before joining the New Figuration movement, progressively adopting red as his colour. An early activist in the May 68 events, he makes life in the city the core of his work, multiplying crowds of anonymous silhouettes. By the time both city and red become too restricted to contain his vitality, G. Fromanger multiplies the use of colours, transposes the world misery on canvass. He then moves from Paris and to Sienna, in Tuscany. It is there that he paints between 1991 and 1995 the Quadrichromies series presented at Mamco. It includes three different ensembles, five very large canvasses, some ten landscapes and portraits and, in particular, the twenty-five Battles expounding in quadrichromies one of the five Noir, Nature Morte frescoes. It is there, in Tuscany, that G. Fromager realized this summer the huge Sens dessus dessous canvass for the Events Corner space on the 2nd floor.

In his fifth episode of Slow and Steady Mamco presents three Swiss artists. Luc AndriÃ© was born in the Canton of Vaud. His paintings are unpolished, seemingly done in hurrid strokes - almost keen to trigger an anxious irritation. If they often show something close to emptiness, something odd and unattractive, it is only because they are not giving in to the fashionable game of painting's enticements. In an entirely different style, St Gall born Alex Hanimann multiplies areas of creation, from drawings to videos and installations. From unexpected elements, often drawn from the animal world, he imposes the composition of sense. His installation Mamco, for example, stages birds in an aviary... From 1975 through 1985, Klara Kuchta, born in Hungary but living in Geneva for many years, has placed the hair at the core of her work as a phenomenon within the cultural, economic and social life. She has thus developed a corpus of videos, photographs, documents and paintings drawn from numerous performances realized in museums and galleries.

Pursuing its collaboration with the city's other institutions dedicated to contemporary art, Mamco is associated with several Geneva events. Within the framework of 50 jours pour la photographie de GenÃ¨ve, Philippe Gronon presents his most recent works, namely black and white photographs of amplifiers of large formats. Photographer of knowledge, his lens is focused on utilitarian 'objects targets' that move towards a diversity of subject matters : research, knowledge or technology, as can be found in his series of writing cases, catalogues of tables of content, Ariane IV motors, or lithographic stones. Another important event this Fall, the 10th Biennial of image in motion, will open on 8 November under the aegis of the Centre pour l'image contemporaine, Saint-Gervais. On this occasion, the Indian producer Amar Kanwar presents a trilogy of documentaries mixing poesy and reality in a continent caught in the grip of bloody conflicts, drawn from a recent, tormented history, to face its antagonisms. Other continent, other vision. In his video, Koka Ramishvili, a Georgian artist living in Geneva close to the animation movie culture, dissects the creation and development processes of drawing. And, lastly, Mamco opens once again its doors to an exhibition organised by the Cabinet des estampes, Art & Project Bulletin, a Dutch publication in which works by some of the most well known artists were published from 1968 to 1989.

The work of Jacques Vieille sits on the borderline of plastic arts and architecture; for Mamco, he produces Reverso, an installation bringing into play Venitian blinds in parallel with industrial building characteristics. Finally, Mamco's publications are being augmented with the release of SpÃ©culations, Ã©crits. 1965-1973, by Mel Bochner. In the 60's, as a young artist, he writes the first reviews of American minimalist artists for Arts Magazine. Translated for the first time in French, these texts shed a significant light on the work of M. Bochner considered as a major figure of the dematerialization of art. This publication is another occasion to show the recent paintings of the artist, who has already been exhibited at Mamco.