A Pioneer of Abstraction. The survey of her estate shows 200 of her most important abstract pieces as well as numerous other paintings and works on paper that have never been exhibited before. In addition, also numerous notebooks are on display. 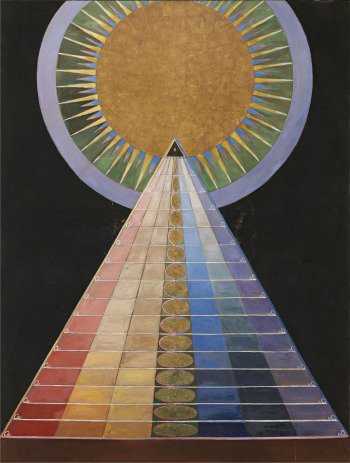 The exhibition presents a first comprehensive survey of the creative work of the Swedish female artist Hilma af Klint (1862-1944), who began to make abstract work in 1906. The survey of her estate shows 200 of her most important abstract pieces as well as numerous other paintings and works on paper that have never been exhibited before. In addition, also numerous notebooks are on display in which the artist captured her visions and ideas.

For Hilma af Klint as for other pioneers of Abstract Art - such as Wassily Kandinsky, Piet Mondrian and Kasimir Malevich - it was the works' spiritual dimension that mattered most. As with many artists and intellectuals of her generation, she was interested in theosophy and anthroposophy and gathered decisive impulses for her creative work as an artist from taking part in spiritualistic séances. Her oeuvre can be seen as an attempt to reach a deeper understanding of the world and human existence.

Hilma af Klint created more than one thousand paintings, sketches and water-colours. But throughout her lifetime she never exhibited her abstract pieces, in which she developed a predominantly organic, and later geometric, formal language. According to her will these works were not supposed to be made accessible to the public until twenty years after her death because she assumed that her contemporaries were not yet able to grasp their full meaning. Yet it was not until the mid-1980s that these works were finally exhibited and honoured for the first time. In view of her significant contribution to the history of abstraction, Hilma af Klint's oeuvre deserves to be rediscovered by a larger audience.

An exhibition of the Moderna Museet Stockholm in cooperation with the Nationalgalerie, Staatliche Museen zu Berlin and the Museo Picasso Málaga. The exhibition in Berlin was made possible by the Verein der Freunde der Nationalgalerie.