Poisoned by men in need of some love. Having fled with his family to a refugee camp as a young boy during the conflict in Kosovo, Halilaj's history is as inseparable from war and exodus as is his oeuvre. 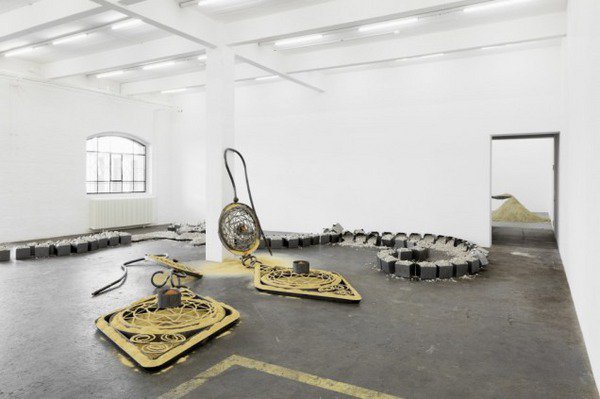 Petrit Halilaj (b. 1986 in Kostërrc) was too young to remember the Berlin Wall falling but just old enough to remember all too well what came in its wake in what quickly became the ‘former’ Yugoslavia: ethnic conflict, war, forced exile, corruption, loss. Having fled with his family to a refugee camp as a young boy during the conflict in Kosovo, Halilaj’s history is as inseparable from war and exodus as is his oeuvre. Much as he may mine his experience, he rejects pathos or nostalgia for something at once far more optimistic, materially complex, politically resonant and, ultimately, critical. From the start, his use of commonplace materials and childhood memories has been an attempt to understand what such notions as ‘home’, ‘nation’ and ‘cultural identity’ could mean. His frequent combinations of earth, rubble, wood slats, live chickens and delicate drawings evoke a world at once intimately personal and utopian, all while revealing the inevitable realities of a far wider sociopolitical sphere. A bit like Joseph Beuys’s felt and fat, Halilaj’s mnemotechny of homeland and homelessness is not documentary, strictly speaking, but it is not romantic either. Instead, it walks an elegant tightrope between memory and actuality, the ingenuous and the fictive, the infinitely personal and commonly shared experience.

For the artist’s first exhibition in Belgium and his largest solo show to date, Halilaj extends his ongoing excavation of the Natural History Museum in Kosovo, a formerly remarkable and well-loved place before splintered nationalisms disintegrated what was once called Yugoslavia. At WIELS, he presents a vast, new installation comprised of a film that portrays the state of the ‘lost’ museum, along with a series of hand-sculpted copies of its animal remnants, based on a collection of found photographs and documents portraying the state they were in before they were removed to make way for a more nationalistic display of folk tradition and heritage instead. Halilaj’s new project attempts to give the museum and its specimens another life and a renewed political resonance.

The exhibition is organized by WIELS Contemporary Art Centre, Brussels and is curated by Elena Filipovic. An artist book will accompany the exhibition.
Petrit Halilaj (b. 1986 in Kostërrc; lives and works in Berlin, Kosovo, and Mantova) studied art at the Brera Academy in Milan. His work has been featured in solo exhibitions including: Pavilion of the Republic of Kosovo at the 55th Venice Biennial, 2013; Who does the earth belong to while painting the wind?! (Kunst Halle Sankt Gallen, 2012) and Petrit Halilaj (Kunstraum Innsbruck, 2011); as well as in group exhibitions, including: The New Public (Museion, Bolzano), It doesn’t always have to be beautiful, unless it’s beautiful (The Kosovo Art Gallery, Prishtina), Lost and found (a nomadic initiative for contemporary art, Antwerp), 30 Künstler/30 Räume (Kunstverein Nürnberg/Albrecht Dürer Gesellschaft, Nürnberg; all 2012), Ostalgia (New Museum, New York, 2011) and the 6th Berlin Biennale for Contemporary Art (Berlin, 2010).