Jordan Wolfson's film and installation work meanders between natural science and esotericism, education and entertainment, and last but not least, online and offline. Harrison's blend of art history references and pop culture takes the form of both grotesque spatial structures and powerful two-dimensional assemblages. 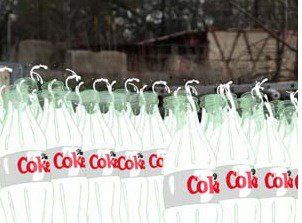 Condoms filled with plump little hearts flutter around, small Coca-Cola bottles hurtle by, mutating red blood cells and a caricature Jew are just a few of the players in the biotope of dazzling images created by the artist Jordan Wolfson (New York, 1980)

His film and installation work meanders between natural science and esotericism, education and entertainment, and last but not least, online and offline. Drawing from multiple sources such as internet, TV commercials and music, the artist mixes fragments from modern and contemporary culture with his own footage.

By sharply addressing icons who, in Wolfson’s own words, express the fear of a ‘global subconscious’, the artist questions the individual’s physical and psychological condition within the realm of a post-digital world. Wolfson represents a generation for whom the internet is not anything strange or new, but literally part of the context in which they grew up.

The exhibition is built around his recent, highly acclaimed animation films ‘Con leche’ (2009) and ‘Animation, masks’ (2011) and the new film installation ‘Raspberry Poser’ (2012), produced by S.M.A.K. (and premiered at REDCAT, Los Angeles, in December 2012).

The films are being shown in a labyrinthine exhibition layout that reflects the complexity of Wolfson's blend of Internet images, autobiographical elements, art history references, popular culture, scraps of schmaltzy music and analogue and digital animation. Thereby the exhibition mirrors Wolfson’s idea of film as a flexible installation medium in which the boundaries between display screen and artwork fade.

The New York artist Rachel Harrison (1966) is considered one of the most influential sculptors of her generation. Since the 1990s she has developed a sculptural idiom in which she incorporates found objects into colourful, playful, abstract forms. In this way she updates Marcel Duchamp’s classic notion of the ready-made in the context of the contemporary consumer society.

Harrison’s blend of art history references and pop culture takes the form of both grotesque spatial structures and powerful two-dimensional assemblages. The S.M.A.K. is presenting sculptures and drawings from a recent series entitled ‘The Help’ (2012), the large-scale installation ‘Incidents of Travel in Yucatan’ (2011) and her photographic ‘Sunset Series’ (2000-2012).

The exhibition is being co-produced by the kestnergesellschaft (Hanover). Rachel Harrison has taken the exhibition that was on there this summer as the 'ready-made basis' for her presentation at the S.M.A.K.: it is additionally infiltrated through several works by Marcel Duchamp as well as works from the S.M.A.K. collection, which enter into a dialogue with Harrison's world.

With the support of Greene Naftali, New York.

S.M.A.K. Museum of Contemporary Art
Citadelpark, 9000 Ghent, Belgium
Hours:
Tuesday through Sunday from 10 am to 6 pm
Closing time cash-desk: 30 minutes before closing of the museum
Closed on Monday
24, 25 and 31 December and 1st January: museum closed
Entrance fees
€ 6: individual visitor
€ 4,5: groups from 15 persons, under-25s, over-60s, students
€ 1: young people under the age of 26
Free: for children up to and included the age of 18, disabled and persons accompanying groups